The Nanny-State Wants to Babysit Your Family

Last week, on 28 April 2020, Tucker Carlson had a 15 minute segment on Fox News (above) called “Big Tech Censors Dissent Over Coronavirus Lockdowns.”  At minute 5, Tucker talks about how Dr. Erickson MD (the doctor who countered corona-hype with data that was unwelcome) was removed from numerous internet platforms. The CEO of YouTube, Susan Wojcicki, justified such removals on a CNN clip that Fox News borrowed.  She said anything “medically unsubstantiated..anything that would go against World Health Organization” would be removed from YouTube. Tucker continues his critique: “Big Technology companies are using this tragedy [of COVID-19] to increase their power over the American population. They’re working in concert with politicians to do it…But suddenly our media are not concerned about freedom of speech. Reporters applaud our overlords as they punish us for disagreeing. You just saw it in that clip from CNN. That happens every day. Our media are no longer challenging power. They are colluding with power. And that might be why there’s been so little critical coverage of the massive expansion of our surveillance state currently in progress. In the name of fighting the coronavirus, tech companies are now following you through your cell phone. They’re watching from above with drones. Those sound like paranoid fantasies; they are not. It’s happening as we speak. Needless to say, our politicians approve of this.”

To prove these are not “paranoid fantasies,” Tucker quotes directly from The Atlantic’s new article, Internet Speech Will Never Go Back to Normal.  The subtitle of this Atlantic article is: “In the debate over freedom versus control of the global network, China was largely correct, and the U.S. was wrong.” In other words, the USA was wrong to allow free speech on the internet. The Atlantic author goes so far as to openly support “speech control” in writing: “Significant monitoring and speech control are inevitable components of a mature and flourishing internet, and governments must play a large role in these practices to ensure that the internet is compatible with a society’s norms and values.”

In 2003, E. Michael Jones wrote Rabbi Dresner’s Dilemma about an event that happened in Israel a year prior, in 2002. Although the original text was taken off the internet at Culture Wars, an allegedly accurate text was saved at Niqna, titled The Military Use of Pornography.  The thrust of E. Michael Jones’ account is as follows: “At 4:30 PM on Mar 30 2002, Israeli military forces took over Palestinian TV stations when they occupied Ramallah in the West Bank, immediately shutting them down. What followed was a little more unusual. Shortly after occupying the Al-Watan TV station, the Israeli forces began broadcasting pornography over its transmitter. Eventually, according to a report from the Advertiser, an Australian newspaper, the Israelis expanded their cultural offensive against the Palestinian people by broadcasting pornography over two other Palestinian stations, the Ammwaj and Al-Sharaq channels. One 52-year-old Palestinian mother of three children, according to the report in the Advertiser, complained about ‘the deliberate psychological damage caused by these broadcasts’.”

I think we now are at a point in the US government’s 2020 overreach in allegedly battling a virus (that has a 99.97% survival rate) that we can say with decent certainty that we are being told not only what to do, but what to believe and think.  No, this wasn’t what the internet has always done to us before 2020.  Notice that the Atlantic magazine hails the current days days when our government “play[s] a large role in these practices to ensure that the internet is compatible with a society’s norms and values” via “speech control.” This liberal totalitarianism took many, many years to accomplish in China.  But it was very fast in the USA as we were forced to isolate and watch CNN.

But our current media situation is actually worse than China’s mind-controlling TV stations:  We’re actually closer to what happened in Palestine with forced pornography. Actually, the Middle East still had strong family structures when porn hit the airwaves in 2002.  So perhaps something still worse is happening in our 2020 lockdown:  We are purposefully kept from real, personalized, human communications as we are forced to watch fear-porn. Via lockdown, under pretense of “saving lives,” we are stuck with getting all of our information from computers, phones, tablets and TVs.  Not from our family.  Not from our friends.  Suicide lines are being overwhelmed day and night.  Pornography use is up, much like how Israel weakened Muslims with pornography use.  The Palestinian mother of three rightly recognized that there was “deliberate psychological damage caused by these broadcasts.”

But are we there yet?  Consider these three things I came across in the past 48 hours:

1) Two cadets at the Air Force Academy in Colorado Springs (about 70 miles south of me) committed suicide due to the lockdown. The title of the USA Today article is: “Two senior cadets, among 100 seniors isolated at the Air Force Academy, died by suicide within days.” 1 Notice again that USA Today admits that the stimulus for both suicides was “isolation” from the lockdown.

2) A friend texted me about her mother (and I include this text with her permission and that of her husband): “She told me yesterday this whole thing [the actual virus and the media hype alike] has wrecked her trust in anybody. She knows that she’s being manipulated but is struggling to snap out of it.”

3) Another friend texted me last night about her mother in law: “She wants to kill herself today—it’s been a long day. Say a prayer for her if you can…I hold CNN accountable for her depression.”  (She had no idea I was writing a blog post on this when she texted me that last night.) 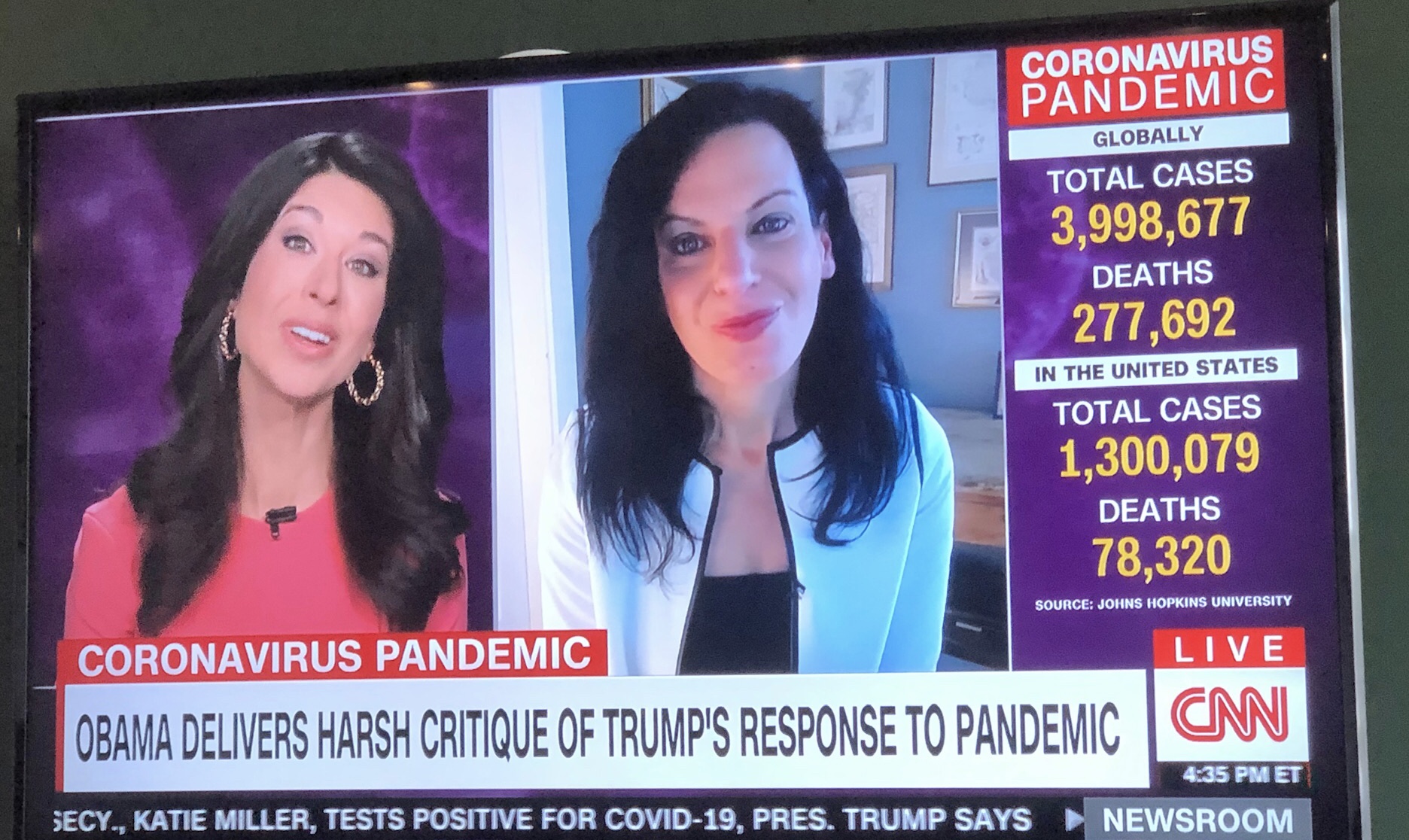 Why does CNN always flash so many wry, sickly smiles when showing the number of deaths?

This lockdown is separating families, isolating individuals, making them distrust everyone and even every media-source. We are in a new American civil war where the dividing latitude is not the Mason-Dixon line, but clashing epidemiologies.  Again, as I wrote before, I believe this virus is real and that older folks and those with co-morbidities should do what they can to avoid it.   But the government overreach is not only excessive.  It is planned:  They desire this lockdown that leads to fear and paranoia. Indeed, demons know that they have to float a real evil in on the back of an apparent good to trick most of humanity.  As I tweeted two weeks ago:  “Marxism arrived in Russia in 1917 to combat a real evil [class division] with a worse solution (communism.)  Totalitarianism arrived in the USA in 2020 to combat a real evil (C19) with a worse solution (globalism.)”

What is different about the 2020 totalitarianism versus the 1917 totalitarianism is that the Bolsheviks had to cross Russia (5,600 miles wide) over 100 years ago with slow-moving vehicles against an integrated family structure and a tight town-fabric to spread their lies of what was for the “common good.” That took a little bit of time. But the hijacking of information superhighways against an America with weak family ties was accomplished in just a few months at the beginning of 2020.  It was a brilliant move: Convince everyone in America that anyone who is against government overreach “wants to kill old people.” Yes, sadly, anyone who is against the total isolation of every individual and every family wants “grandma choking on a respirator.” (This is rich moralizing coming from leftists who have been fighting for legalized euthanasia for the past 20 years!) And yet we weak conservatives took the bait for a simple flu that, yes, has killed 60,000 Americans (notwithstanding excessive over-reporting of all deaths to COVID, all of whom I pray for at the memento of the dead anyway) to let not only our constitutional rights—but even our human rights—be sunk.

What you can do:

1) Decide when you are going to stop social distancing. This decision is up to you, not to the government or CNN. The curve was flattened on coronavirus and yet CNN (and even some visitors to Fox) are telling us that we can not lift lockdown each other until there is a vaccine (18 months away.) Suspension of human rights and the US constitution is not up to CNN or the governors of states.  In fact, your rights don’t even come from the constitution.  They come from God and the constitution simply recognizes that fact.

2) Stop watching TV. They are brainwashing you with fear-porn so as to weaken you and isolate you. They are not even giving the correct data or biostatistics on this virus.  Isolation was indeed necessary in NYC to combat coronavirus (where Gov. Cuomo recently admitted to filling nursing homes with COVID-positive patients) but it has become obvious to perhaps 30% to 40% of America that the rest of the USA is suffering under unprecedented government overreach and destroying our economy.  Remember: Big Tech and the liberal governors can only control your will if they first control your intellect.  That’s straight from St. Thomas Aquinas that the will follows the intellect.  Thus, stop exposing your intellect to fake medicine that is not based in data.  Don’t even trust the data that I put on social media.  Do your own research on all the biostatistics you can on COVID-19 and you will see the truth (if you can still find it, for much of the truth has been removed!)  Just remember:  YouTube knows that YouTube is full of a million lies on a million topics and yet they leave these false videos up on anything from car repair to surgery for all to see.  If the real medical data recently removed on CV were a lie, there would be no threat to YouTube or our current political Commissars.

3) Consider Death as a Christian Instead How Pagans live in Superstitious Fear.  Take precautions against this virus if you want, but stop being superstitious about a medium-sized flu.  Remember that we are on pilgrimage through this earth where we all die anyway, and this is not our home.  We get our bodies back in heaven or hell, but we will get our bodies back as glorified bodies only if we die in sanctifying grace.  That is all that matters:  Dying in sanctifying grace.  The inspired Sacred Scriptures tell us how we should see our death on earth:

Through death [Christ] might destroy the one who has the power of death, that is, the devil, and deliver all those who through fear of death were subject to lifelong slavery.—Hebrews 2:15

They have conquered [satan] by the blood of the Lamb and by the word of their testimony, for they loved not their lives even unto death.—Apocalypse 12:11

(Notice that the Holy Spirit Himself implies above fear of death = slavery…and…not-being-obsessed-with-life-on-earth = freedom.)

4) Demand your rights before the last bits are taken.  Finally, consider how this female, evangelical civil attorney informs Raymond Arroyo of the need for Catholics to push back against injustice in courts of law and listen closely also to her appraisal of “civil disobedience” in this EWTN episode: