34 years ago last month, the former states of the USSR remembered the anniversary of the most destructive nuclear meltdown in world history: Chernobyl. Although the HBO series takes Chernobyl takes some historical-fiction liberties with what happened under the Russian government in the 1980s, there’s some similarities to what we are currently facing in the USA: Both governments manipulated statistics of a health crisis so as to maintain authoritarian control over their people. The difference is that the Russian government downplayed Chernobyl so as to manipulate the people into submission, where the US government is currently overplaying a real flu so as to manipulate the American people into submission. But both governments played the same thing: Fear and control during a health crisis.

“The nuclear meltdown at Chernobyl 20 years ago this month, even more than my launch of perestroika, was perhaps the real cause of the collapse of the Soviet Union five years later. Indeed, the Chernobyl catastrophe was an historic turning point: there was the era before the disaster, and there is the very different era that has followed. The very morning of the explosion at the Chernobyl nuclear station on April 26, 1986, the Politburo met to discuss the situation, and then organized a government commission to deal with the consequences. The commission was to control the situation, and to ensure that serious measures were taken, particularly in regard to people’s health in the disaster zone. Moreover, the Academy of Science established a group of leading scientists, who were immediately dispatched to the Chernobyl region.”

The similarity between Russia’s downplaying of medical statistics so as to maintain control and America’s governors exaggerating of coronavirus statistics so as to maintain control has already been mentioned in the first paragraph. But the significant difference between the two is this: Whereas Russia controlled half of Asia in communism, the current globalist overreach (in the name of stopping a small to medium sized flu) is aiming to control the whole globe. This is where liberal totalitarianism is trying to step even beyond localized Communism to establish a eugenic-based globalism that would have been called a “conspiracy theory” in 2019. But here we are: The globalists now propose that the virus and the cure be tracked in every human of the planet.  They know this “covid-control” must remain primarily over the United States, for where the USA goes on this, so goes the rest of the planet. We all either fall to our knees to beg for a vaccine, or we resist.  The latter is obviously founded in real science, namely, insisting upon 70% global herd-immunity as every virus eventually runs its course.  (And no, don’t tell me the same leftists who have been fighting to promote legalized euthanasia for 20 years are all of a sudden concerned about “grandma choking on a respirator.”) 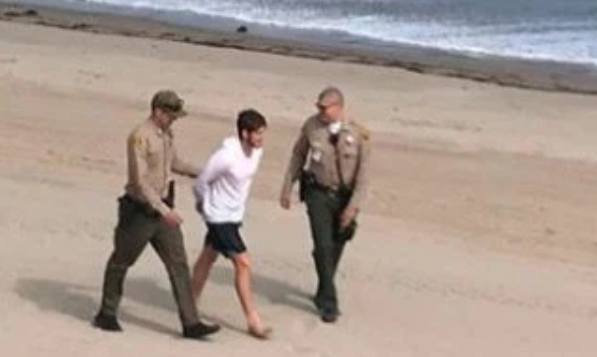 California surfer arrested for not “social distancing” in the Pacific Ocean.

We have a lot to learn from the former USSR as we begin our own destructive path of 2020 down a new road of liberal totalitarianism. If Mikhail Gorbachev is correct, then it was probably the deceit executed by the Russian government surrounding Chernobyl that released the Eastern Empire from the yoke of communism. But it will be the lies surrounding COVID-19 that determine if the USA (and subsequently the rest of the world) fall under the yoke of globalism, eugenics and ultimately a false-savior who becomes “our only hope” to bring unforeseen oceans of emotional relief to the fear fabricated under an objectively-overblown flu. And this is where every Christian of the world (beginning with the most outspoken—Conservative American Catholics) will be the first who must choose between a real Savior, Jesus Christ…and the false saviors of globalism who want all the world’s Christians to be muzzled, strangulated and silenced, as demons have have already blocked the truth from being spoken (or even considered) by countless deceived Catholics.