On my video called Theology and Current Events (TCE) #41 I was joined in early 2022 by Armando Valenzuela to discuss the Mexican “devotion” called “Santa Muerte.” Mr. Valenzuela is a former police officer and special-agent from the Los Angeles Police Department. One thing Armando made clear (and no one can accuse him of “racism” since he’s half-Mexican and half-Pima Indian) is that the Santa Muerte devotion is not an old Mexican devotion based in Catholicism, but a new diabolical act of worship of the demon of death introduced into the country by Mexican drug cartels.   Or, more likely, as we will see later, it is a return of the Aztec demons.

On our podcast and video, Amando described going to a small Santa Muerte temple in Los Angeles.  (Notice this “devotion” has spread beyond Mexico.)  A man heavily involved in Santa Muerte got possessed and had a conversion to True Catholicism.  He needed an exorcism.  On that podcast, Amando described that exorcism. Either before or during liberation, the demon described a demon scraping at his heart as if he were trying to rip it out.  Amazingly, on that podcast, I missed the obvious connection of that to the Aztecs, namely, that Aztecs ripped out the hearts of neighboring peoples atop their pyramids in the 15th century.  Could the demon of Santa Muerte be the same demon of the Aztecs if they both scrape at the heart?  Truly with Mexico turning her back on Our Lady of Guadelupe with abortion and trafficking and modernism, it is no wonder that the old-demons of human sacrifice (specifically ripping the heart out) would return now to Mexico.

No, this “devotion” of Santa Muerte has nothing to do with how Mexicans lived in the 17th century in honoring the dead on the 2nd of November.  “All Souls” in Mexico was like anywhere else in the world 100 years ago:  Masses were not in “celebration of their life” by pouring beer on graves, but rather people made reparation for the sins of their faithful departed.  This is what Catholics have always done on the feast following All Saints.  But Amando shocked me on the podcast by insisting that the devotionals set up to the demon-god only started in the 1990s via the drug cartels. 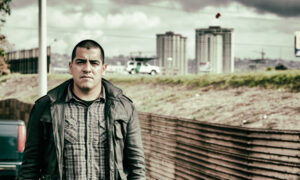 I recently listened to a four-hour podcast with the above man named Ed Calderon and Lex Fridman. Ed is a retired member of Mexico’s most elite anti-Cartel police department.  In fact, his department was not so much a police department as a paramilitary organization. You see, the Mexican cartels that Ed fought for years are not street-gangs stuffing cash in mattresses. They are a parallel government to Mexico, replete with drones, surveillance cities and even guided missiles. One Cartel even took on the Mexican Army… and won.  Ed was one of the few members to neither be killed, nor be bought off by bribes.  But he lost many other honest (and dishonest) friends (and some teeth of his own.) In the podcast, Ed even describes cartels cutting the heart out of living enemies.  Does this not sound like whatever demon “inspired” the Aztecs five hundred years ago to do the same?

Ed left his anti-cartel job several years ago and now lives in the US where he trains US special forces, police departments and the private sector on counter-capture work. By “counter-capture,” he re-creates street-scenarios and kidnapping-scenarios in order to teach escape, prevention and even Jason Bourne-esque fighting with random things like pens.

Ed has tremendous natural virtue and valiantly fought some of the most evil people on the planet. So, I greatly respect him on a natural level.  But on the supernatural level, Ed unfortunately describes himself as a “cultural Catholic” and even encourages his 8 or 9 year daughter to dabble in the “Santa Muerte devotion.” Ed’s Instagram avatar includes himself with the skull resembling “Santa Muerte.”  He also has a very erroneous understanding of traditional Catholicism in Mexico, including an odd view of Our Lady of Guadalupe.  On the podcast, Ed basically says Our Lady of Guadelupe was just a Spanish devotion that they doctored up with indigenous art to win the natives.  He totally fails to recognize the miraculous aspects of the tilma.  (I won’t link it since the language is pretty bad in it.)

Ed was also interviewed by Recoil Offgrid Magazine (I’m not linking that one either, but due to immodest ads.) But I am going to include a few paragraphs of Ed describing how and why the Mexican drug cartels have such a strong devotion to this new “devotion” of Santa Muerte:

Recoil Offgrid: How does the occult play into cartel operations?

Ed: Colonel Leyzaola used to say, “The hand that steals will always hide. The hand that gives thanks will always show itself.” What this meant was that cartel business operations are always very clandestine, but charity and public works were very high profile. They regularly did things like upgrading churches, paying for burials, and throwing lavish quinciñeras in neighborhoods where kids don’t even wear shoes. There’s a lot of faith involved in some of these groups. They often used Santa Muerte altars. Some in the cartels think this belief gives them an edge, or karma, in the execution of their mission. It’s sort of an attempt to bribe their way into heaven, or at least into success. There are a couple of patrons that cartel members looked to for this kind of extra boost. One was Santa Muerte (“The Holy Death”), an old-school Aztec religious deity. Santa Muerte is an underworld goddess who, through the years, was influenced by European religions, Freemasons, and even [famous English occultist] Aleister Crowley. She’s often seen as a “last ditch” saint to pray to. If praying to other saints doesn’t work, you pray to Santa Muerte.

Cartel members and police officers would go to the Santa Muerte priestess to get protection rosaries made. These are a promise to protect them as long as they pay her — either in silver, because she doesn’t take gold, or blood. For the latter, hit men or cops would have to acknowledge that certain kills were done in sacrifice. There are rumors about how these particular kills were marked. For example, certain bodies would be found handcuffed in the front or left facedown, but it was all hearsay. But belief in Santa Muerte is widespread, and not just within the cartels, either. Soldiers, policemen, and politicians are all part of it, but their affiliation is often hidden from the public. The military has standing orders to destroy any shrines or altars that are found during missions.

The other occult deity is Malverde — a more regional, Sinaloa-based patron saint of drug traffickers. He’s depicted as a young guy, well dressed with a moustache, sort of like a Mexican Robin Hood (much like El Chapo is viewed now). There’s a shrine to Malverde in Sinaloa where senior cartel members leave offerings and thank you letters.

Me again, here…So, hopefully you now see that you can not worship Jesus Christ who has conquered death by His own resurrection, all the while dabbling with a worship of the demon-of-death (aka Santa Muerte.)  In fact, the resurgence of this old demon of death is certainly a reminder that Our Lady of Guadalupe once conquered this demon of death by eradicating Aztec human-sacrifice 500 years ago. But this death-based demon’s resurgence also has an eschatological and apocalyptic warning for anyone who knows Scripture, namely, that the last enemy to be destroyed is death.—1 Cor 15:26.

Who’s side will you be on in the final battle?  Jesus Christ who is Life Itself?  Or Santa Muerte which is no one else but a demon of death?  You can’t pick both.  And pray for Ed, a good man greatly mistaken, that he may come to accept Jesus Christ and the fastest way to Him—His holy mother, Our Lady of Guadalupe.