“Walk for Life” in San Francisco 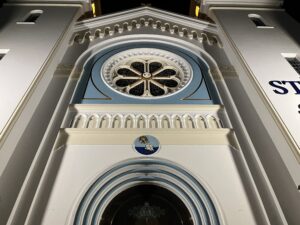 Two disclaimers before a short blog post:  1) I am sorry I didn’t contact many friends or benefactors before coming to the Bay Area.  It was a quick trip for the Walk for Life.  I briefly stayed at Star of the Sea parish (above) a thriving parish of the Archdiocese of San Francisco. The pastor is Fr. Joseph Illo.  Fr. Illo and I were both in Mass of the Ages Part 1 and Part 2, discussing the TLM.  2)  I used to go to the March for Life in Wash DC every year but I stopped going because there is not a penitential enough tone to the March.  We should not be celebrating until God has ended abortion in this country.  And even then, we will never be over the wound of 50 million surgicals and several hundred million chemicals in this country.  As I put on Twitter this weekend, “The reduction in babies being killed since Roe was kicked back to the states is pretty small. We still haven’t won.”  Still, that is why I marched this January 2023, only to stand for the unborn to show their killers that we’re not going away. 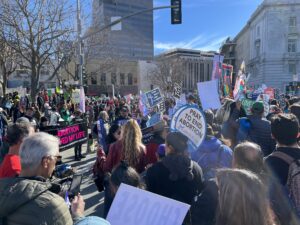 Both pro-lifers and pro-aborts came out to the Walk for Life in San Francisco.  I do not use terms like “pro-choice” because babies do not choose to die.  We love our enemies (and you could see that there) but to compromise on language is to compromise on defending life.  Thus, we can never use terms like “pro-choice” when those who believe families can kill their own children are only promoting a culture of death. 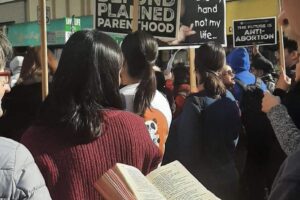 Being on the old Divine Office, I often have to catch up while walking back in Colorado, or even in things like this.  In the old Roman Breviary, we have eight canonical hours a day and we must pray all 150 Psalms a week, in Latin.  The old publishers make something called a Diurnal (the small book you see in my hand above) that has seven canonical hours a day.  As you long as you do Matins (the longest of the hours, permitted to be anticipated the evening before—the one canonical hour I often do on my phone) then the tiny Diurnal contains all the seven canonical hours for the entire year including propers of the season and the feasts.  It’s one of the favorite things I keep in my satchel because when I was doing the new Liturgy of the Hours, we had no book so small and so capable of aiding the priest in praying 150 Psalms a week.  The above tiny book (worth its weight in gold to a “pilgrim priest” who prays so many Psalms walking) can only be purchased in Europe. 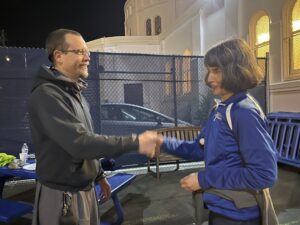 There are so many different types of people on pro-life marches. Above, I met a blind runner who is a single woman who lives in a Catholic community in Kansas.  (Yes, it was a staged-photo, but someone else asked me to do it, not my idea!)  Still we had some amazing talks about the Catholic faith, the community she lives in and how she was hit by a semi-truck a couple years ago and has triumphed over that to return to run half marathons.  (Before the accident, she was blind too, but also running full marathons.)  Shortly after that above pic, the gal who took it asked me to make a short video on why we walk for life.  So, I did it and added it to my Twitter profile.  You can watch it here: