Mary, Destroyer of All Heresies Part I

Although she is the most tender of mothers, Mary has also been known for centuries as “the destroyer of all heresies.” Why?

Most of my readers probably know from Church history that any correction of a Marian heresy was usually de facto a correction of a Christological heresy afflicting the faithful. For example, Bishop Antonio de Castro Mayer (of holy memory) points out that “the Council of Ephesus taught categorically and definitively that in Jesus Christ there is only one person, the Person of the Son of God, in which subsist two natures, really distinct, the divine nature, by which Jesus Christ is truly God, and the human nature which made Him truly a man. And the Most Blessed Virgin Mary, declared the Council, being Mother of Jesus Christ, became truly the Mother of God.” In other words, recognizing Mary is the “Mother of God” is really only recognizing that Jesus Christ is God.

But reading the words of the late Brazilian traditionalist Bishop Antonio de Castro Mayer helped me to understand that Mary may be key to defeating modernism in a very specific way. In so many words, Bishop de Castro Mayer points out that Mary’s life is full of miracles. Modernism, on the other hand, is indeed the synthesis of all heresies, but it has also has a new offense against God: It is the replacement of the supernatural with the natural in the Catholic Church. Modernism has created a hierarchy that is now man-centered, not God-centered (as all of us clergy should be.)

Many people know that modernist clergy shy away from Marian devotion because it is a stumbling block to their “ecumenism.” (Ecumenism is tantamount to the heresy of religious indifferentism, the notion that any religion can you to heaven.) But there’s another reason most people miss: Even though the New Testament only implicitly (rarely explicitly) reveals the miracles of Mary, her life was a set of miracles from start to finish: She was the only human person in all of history who was Immaculately conceived. Jesus appeared to Mary at the Resurrection. She was the channel of the Holy Spirit at Pentecost upon the Apostles. The Holy Theotokos was assumed into heaven as she fell asleep in the Lord. After her earthly life, even more miracles abounded. For example, just Our Lady of Guadalupe converted 10 million in simply the first century of the Americas hearing of her and seeing her on the tilma.

We often hear modernists say that Mary was just a normal mother who led a normal life of a Jewish mother in the 1st century. There’s a truth to this, that her day-to-day life would have looked pretty normal to her friends and family. But under it all, her life was a giant miracle from start to finish. 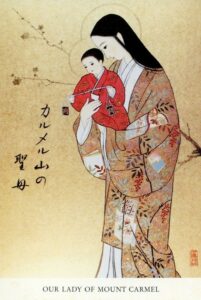