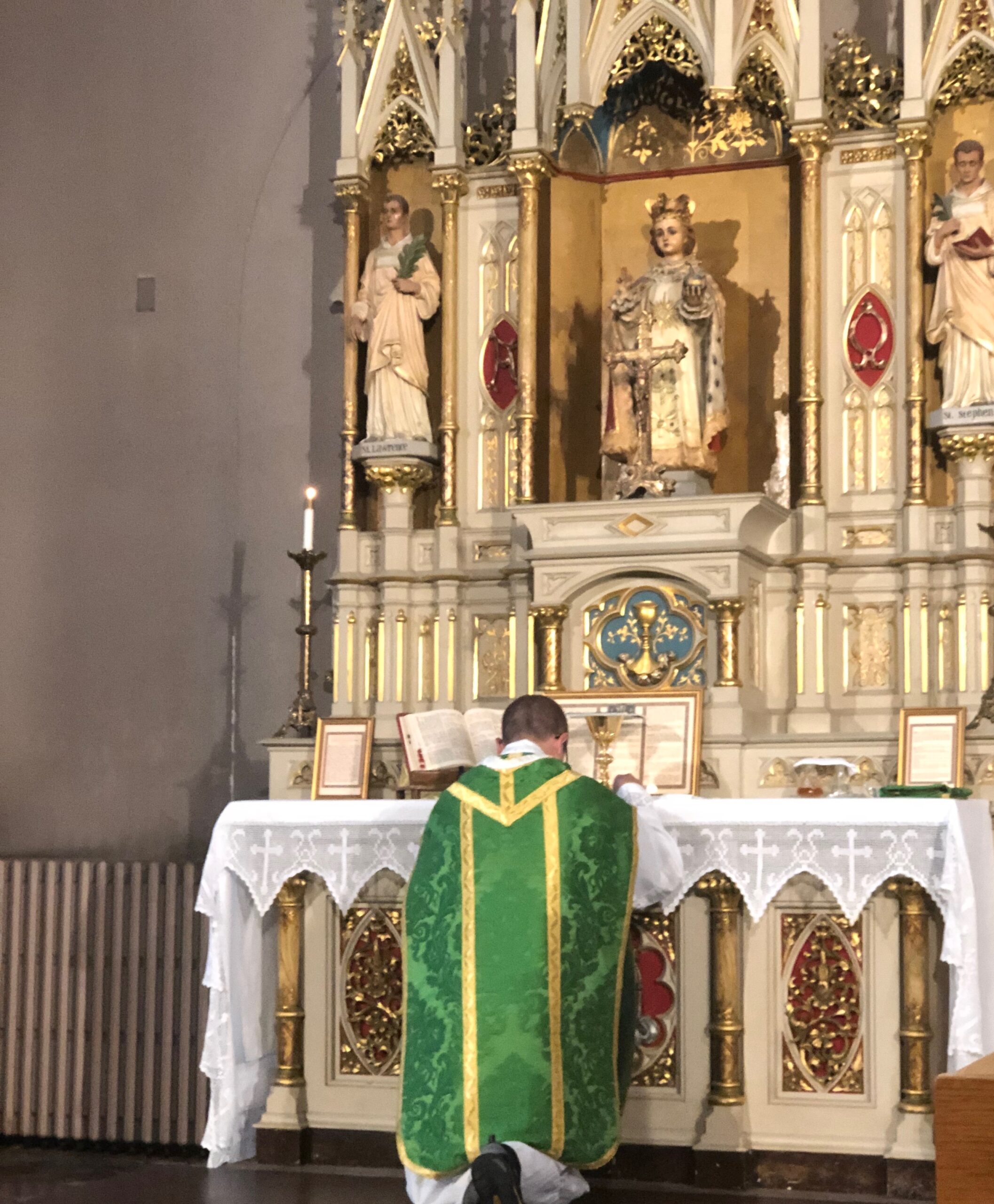 Me in the Midwest a few years ago.

Most people would think that the low Mass is the original standard, but the Solemn High Mass does indeed date back to the earlier Popes in Rome. Only when clerics became more sparsely spread through the Empire did the low Mass seem to have become a concession (not a goal, but a concession!) to Divine worship. The low Mass is not the ideal when compared to the Solemn High Mass with all of its beauty, but both are still the same re-presentation of the perfect sacrifice of love upon Calvary of God the Son offering Himself to God the Father.  The low Mass (still a Traditional Latin Mass, but, again, without singing or servers) is what I offer alone in my hermitage during the week and on Sundays.  The low Mass done alone is the only TLM available to a parish priest (diocesan hermit) who lives alone, except when he is invited to a parish to help.  I had a couple amazing invitations this year that I want to describe below. 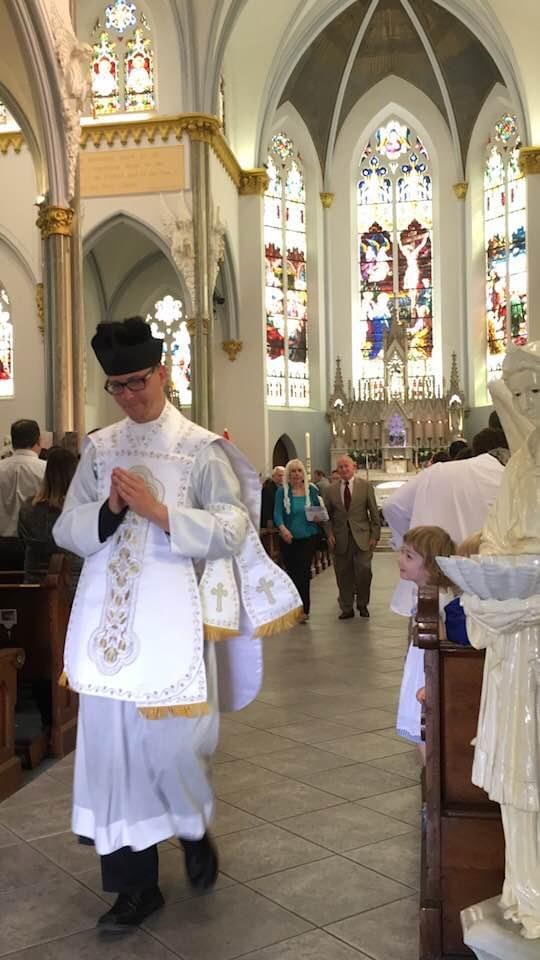 Recessional from a Missa Cantata when I was on loan to the diocese of St. Augustine, FL. This is where I was stationed, in the Cathedral Basilica of the Immaculate Conception in Jacksonville, FL.

When I was ordained in 2010, I started my priesthood offering almost entirely the Novus Ordo Missae (the Mass of Paul VI promulgated at Vatican II.) Halfway through my priesthood (now at 11.5 years, so about 5 or 6 years ago) I switched to the TLM. However, because I learned on my own, I have offered the low Mass for the past six years.  Thus, I never had a choir for my daily Mass at home. I rarely have servers. I certainly don’t have other clerics around me as a hermit to be deacon and sub-deacon. 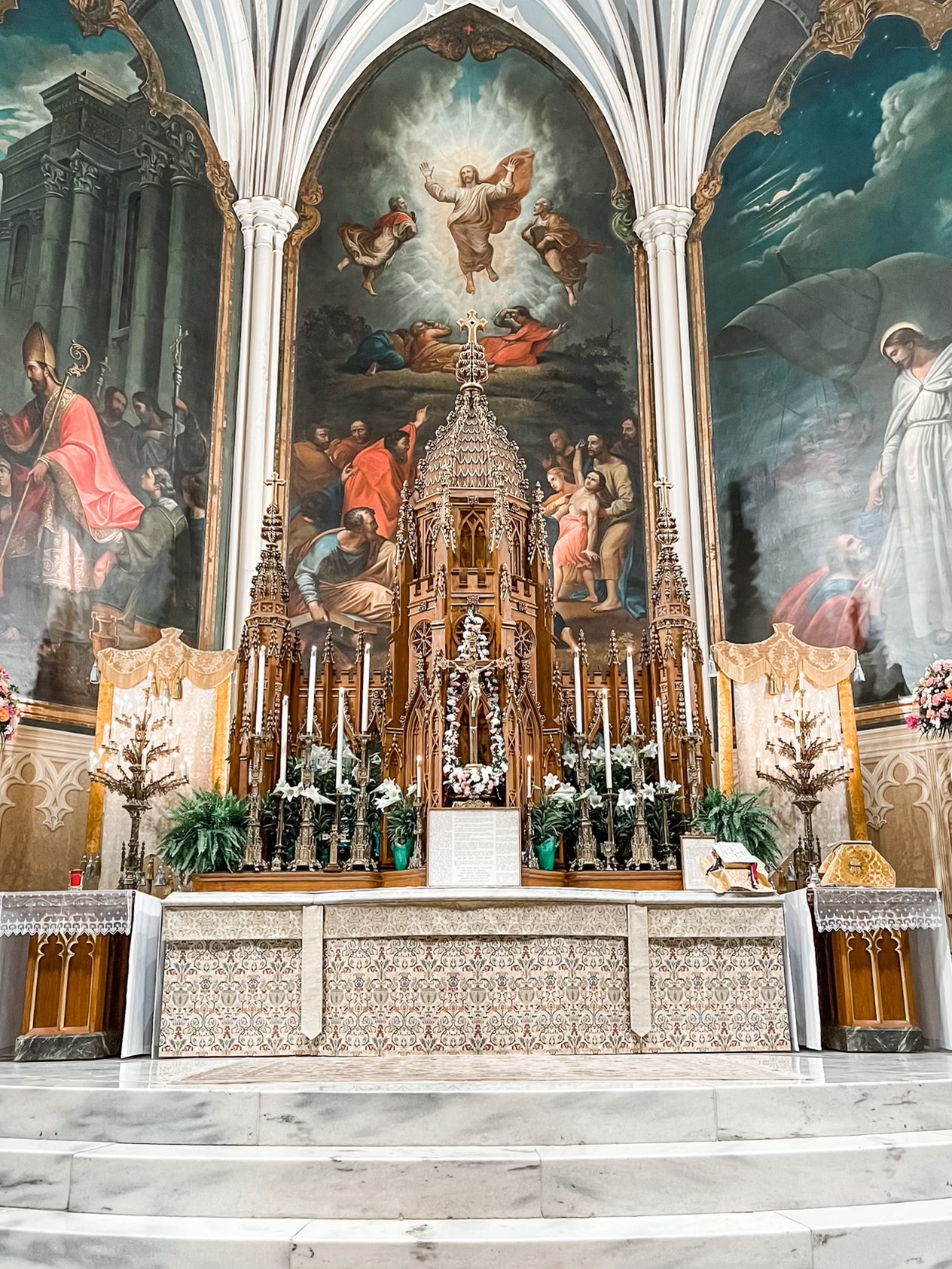 High Altar built by the Irish. This was the norm before Vatican II in any medium-sized Church or large Church.

Four years ago I was on-loan to two dioceses in the South of the United States and because the parish I covered had choirs, we were able to do the Missa Cantata once a week. (The Missa Cantata, again, is a priest plus choir plus several servers, but no extra clerics are needed.) The Missa Cantata is extremely beautiful, especially if the priest and the choir can sing. 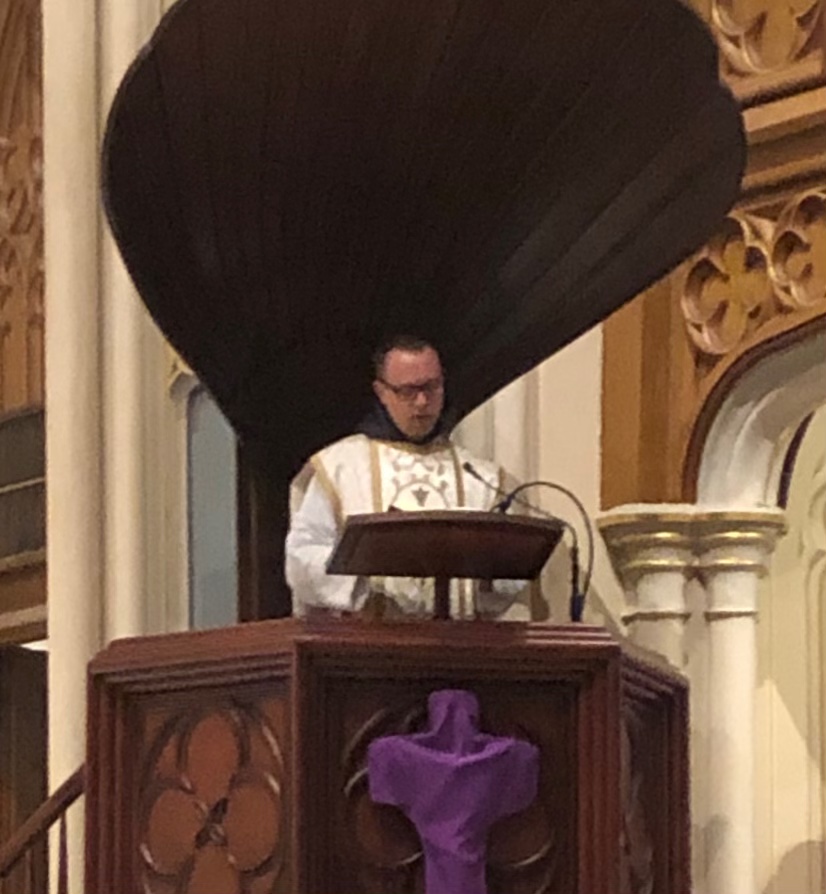 However, up until last year (2020) I had never had the honor of offering a Solemn High Mass as either priest or deacon or even sub-deacon. This year, that changed. This year, I was invited to be sub-deacon at a wedding (strangely also in a diocese in the South of the United States different from the aforementioned ones) and then I was invited to be both priest and sub-deacon during Holy Week’s Solemn High Masses (and yet another different diocese in the South of the United States, strangely different from the aforementioned three dioceses!) The choir singing over that high altar seen there is known as the very best in the Gulf Coast. In any case, I now understand why people say the Solemn High Mass is the most beautiful thing this side of heaven. In fact, even the low Mass is objectively heaven, but the high Mass is not only objectively but also affectively an experience of heaven. 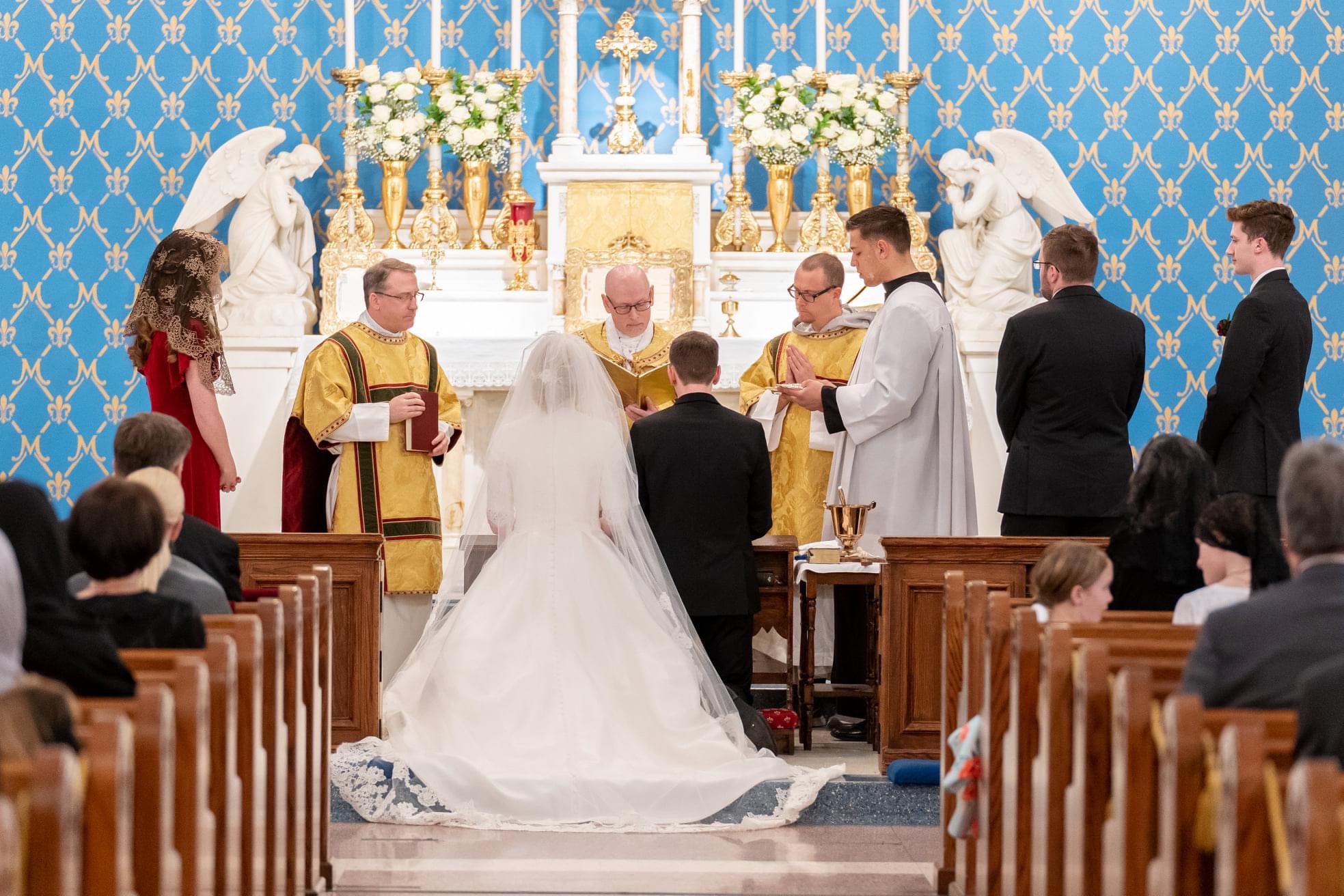 I’m very thankful to God that He found me fit in 2021 to offer at least one Solemn High Mass in 2021. I’m also very thankful to the newly married couple that invited me down South (see above) and a different pastor who invited me down for Holy Week. Appropriately, my first Solemn High Mass as priest (not sub-deacon) was Holy Thursday this year. Of course, Holy Thursday was the feast that Jesus Christ offered His body and blood for the life of the world and established the Holy Priesthood that we might do the same until the end of time. 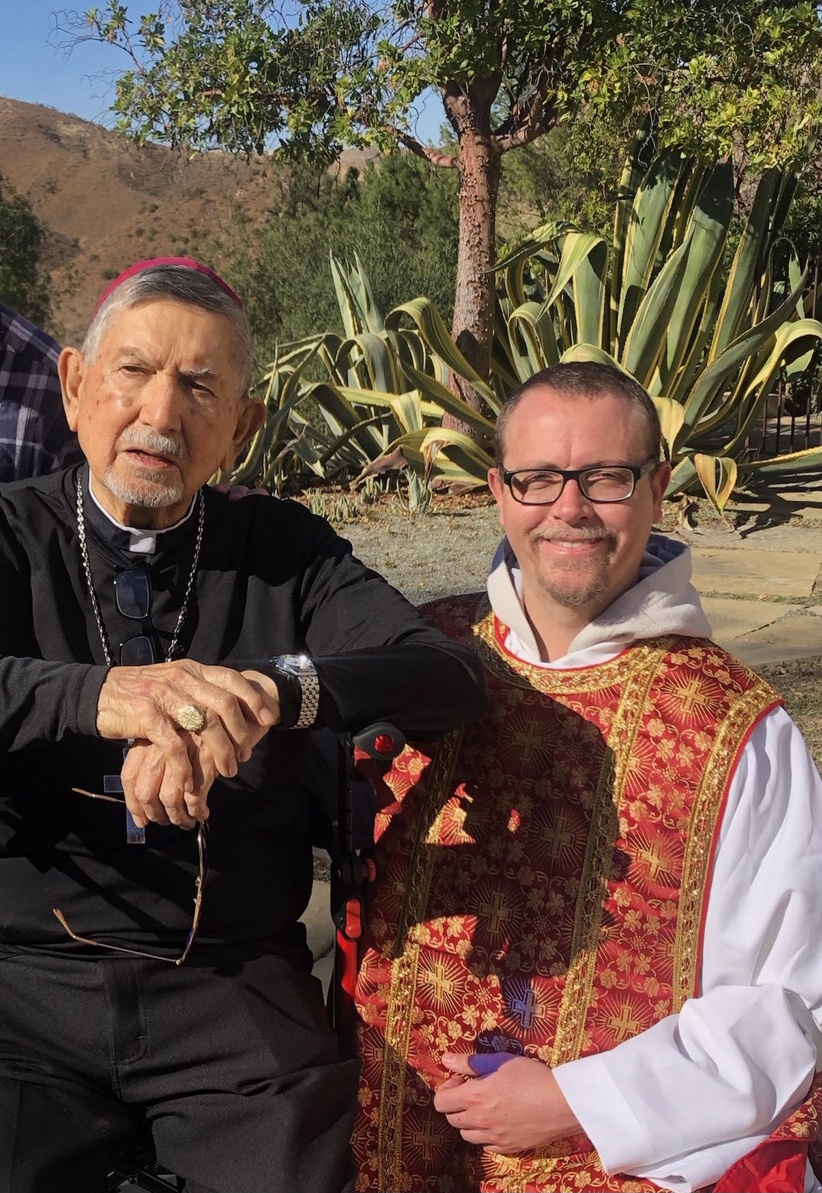