We’ve already covered a kind of Stockholm Syndrome being brought on by the State here. Now we will look at the Church.

This week, the Vatican’s Congregation for the Doctrine of the Faith (CDF) answered in the negative to the question Does the Church have the power to give the blessing to unions of persons of the same sex? This might seem an orthodox response (and it is) but the CDF ironically quoted Amoris Laetitia (the 2016 document allowing divorced and remarried to receive Holy Communion without confession or annulment) by then saying, “There are absolutely no grounds for considering homosexual unions to be in any way similar or even remotely analogous to God’s plan for marriage and family.”

Most in the LGBT community were disappointed, while others celebrated what they saw as an end to the “cognitive dissonance.”  One person commented under Dr. Taylor Marshall’s video, “As a gay atheist, this makes me incredibly happy.  People riddled with cognitive dissonance can no longer hide behind the ‘the pope is literally an ally’ claim.”

You might expect me to be happy about the CDF’s statement, but a happiness is neither true nor lasting while there remains published errata concerning the same grave matter.  These certain contradictions indeed demand an explanation. To know that we are speaking and thinking with the mind of the Church, we must aim for that same clarity which is the definitive (i.e. identifying) mark of the unchanging, universal Church.

Enormous and preceding issues like Canon 188 aside, let’s consider the following two issues in light of the recent CDF statement:

1. Ed Pentin, Vatican correspondent to the National Catholic Register, tweeted this in August of 2017: 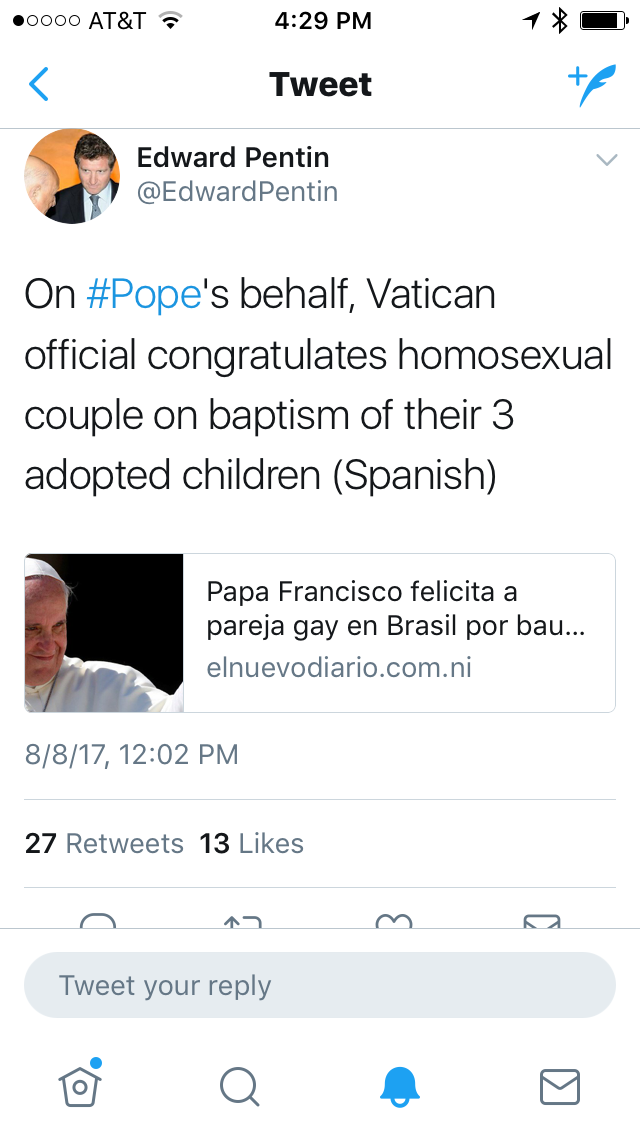 In Stockholm Syndrome, when the abuser loosens their grip on a victim, instead of the victim running, it causes the victim to thank the abuser for these occasional acts of kindness.  It is a survival mechanism for the abused.  Currently, both the left and the right go scrambling for doctrinal crumbs, rejoicing whenever official statements appear to congeal within their own personal beliefs.   Eventually, it all comes around to the abuser knowing he will ultimately be forgiven for the times that he looks like an enemy. Why?  Because the next day he will appear to be your friend.  Flip-flopping on doctrinal issues makes people insane.  Solid answers (even when people don’t like them) keep people sane.

But the mildly-conservative American Catholic celebrities say:  See!  He said something orthodox!  See!  He said something orthodox!  Here, the abuser uses his own flip-flopping to keep Catholics (on both left and right) held hostage as they hope for better doctrinal days.  (We also saw this doctrinal flip-flopping with all the edits to the CCC on the topic of the death-penalty.  They started under Pope John Paul II in the 1990s.)

To avoid getting taken for a ride on all this, I first suggest you teach Apostolic Catholicism to your children from old-school catechisms that don’t bait you into an ever-changing “doctrine.” (For example, try my CPX series you can subscribe to on YouTube for free.  We continue to study the short but handy Catechism of Pope St. Pius X written in 1880.). The old catechisms do no flip-flopping on important issues like sexual morality or the death-penalty as we see in the modernist hierarchy.  Yes, continue to be obedient to the hierarchy on whatever is within their bandwidth of authority, but remember such authority never includes changing the Apostolic faith or liturgy.

Secondly, make the resolution to neither get happy at CDF statements nor sad at tweets (when the opposite comes out in a month or two.)  Remember:  It’s all a game of oscillations between orthodoxy and liberalism  to keep us hanging on for the next wave of control followed by a doctrinal treat…manipulation followed by a treat…manipulation followed by a treat.  This is all explained in the third secret of Fatima, namely, apostasy from the top down.  Don’t be the victim of Stockholm Syndrome who defends your abuser—just because you had a good day.