Many prayerful Catholics have been noticing that much of 2 Thessalonians 2 seems to be materializing over the past few years. In fact, it seems prophesies from the Old Testament are being fulfilled. One older friend of mine who is a covert from evangelical Protestant to Catholic believes the “abomination of desolation” (Dan 9:27 and Mt 24:15) was the placement of the Martin Luther statute into the Vatican in October of 2016 (nearly four years ago): 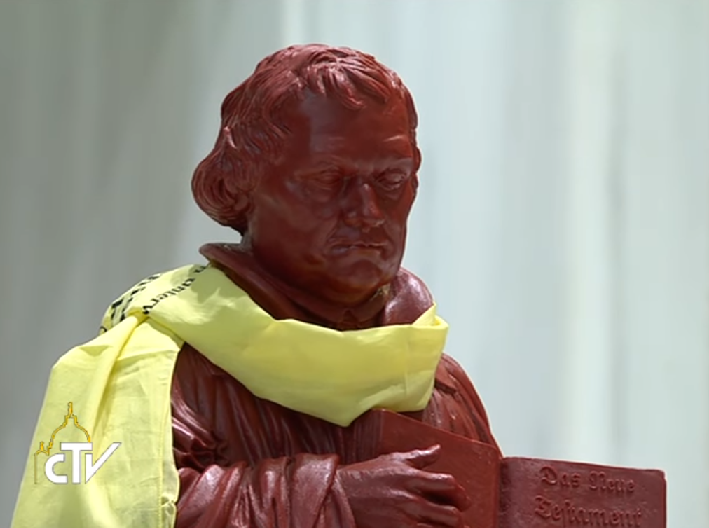 Consider also how a priest friend of mine recently pointed out that 2 Thess 2:10 asserts that a group of people during a global “rebellion” will “refuse to love the truth and so be saved.” He and I were recently discussing how it’s not enough to love Jesus while rejecting the prophetic realities that are being unfurled before our eyes in 2020. In fact, since Jesus is the Truth (Jn 14:6) then we concluded that to reject the obvious scientific and political truths of 2020 may perhaps be even a dangerous move to one’s own salvation. It’s not that I am saying that Fox News is the key to salvation.  But I do mean that that the Truth as found around us in days as prophetic and pre-apocalyptic as 2020 must be more than just an emotional connection to a kind Jesus of the past.  We must recognize the Incarnational truth that is currently all around us.  We must actively reject all agents of deceit.

This includes accepting not only Christ, but also the cross that very few of us want to carry:  We are now called to prophetically live our vocation of baptism by rejecting the lies of the mainstream media like never before.  I look around and see a once-sane people and a once-good people completely losing their minds over a virus, sodomy-rights, the police, religious statues, etc., you name it…Many people are losing their minds in denying obvious historical and scientific truths. Can such people follow Jesus sincerely? To answer that, we must consider this:  Jesus is the Truth (Jn 14:6) and “No one who denies the Son has the Father” (1 Jn 2:23.) This means that denying any truth in 2020 is in some sense a rejection of God.  Accepting the lies of the mainstream media must place us with “those who are perishing because they refused to love the truth and so be saved.”—2 Thess 2:10.

For that day will not come, unless the rebellion comes first, and the man of lawlessness is revealed, the son of destruction, who opposes and exalts himself against every so-called god or object of worship, so that he takes his seat in the temple of God, proclaiming himself to be God.–2 Thess 2:3b-4

Notice that the “man of lawlessness” will take his seat “in the temple of God” and “proclaim himself to be God.”  The Church Fathers believe that man will be the final antichrist, receiving the misdirected-adoration of the nations.  I believe these Church Fathers are correct, of course, but I also have to wonder:  Would this AC demanding worship have to look like the raging demands of a Hitler or a PolPot?  Would simply changing the dogma of the Catholic Church from a “seat in the temple of God” also be enough to qualify as “the man of lawlessness”?  Indeed, such a man is guaranteed to come in a time of global “rebellion” as he epitomizes “lawlessness.”

The Church Fathers also believe that this “man of lawlessness” will be the final antichrist.  I am (of course) unable to identify this man in the world theatre of 2020.  Nevertheless, I do entertain the possibility that his sidekick, the false prophet of the Apocalypse, may indeed be identifiable:  And the beast was captured, and with it the false prophet who in its presence had done the signs by which he deceived those who had received the mark of the beast and those who worshiped its image. These two were thrown alive into the lake of fire that burns with sulfur.—Apocalypse 19:10

In such a pre-apocalyptic year (or at least in these highly-foretold and unprecedented days like 2020) it will be very necessary to not only have an emotional “connection” to the historical Jesus, but to have a fully-aware and incarnational love of Christ right here and now, as He shines light into the darkness of the lies around us.  Such awareness of the Catholic worldview applied prophetically to today will be necessary for salvation, especially as numerous sources of the mainstream media try to deceive us with unbelievable lies.  Literally.unbelievable.lies.  In these days of “rebellion,” the opinion polls of the majority’s passionate deceit would have to be rejected by the remnant of believers to be saved.   St. Paul and St. Peter are clear that the elect will always be recognized by a counter-cultural attitude, cf. 1 Cor 7:31; Acts 2:40 and especially Phil 2:15.

Part of loving God must be seeing past the deceit of a world that has already received the Incarnation but continues to reject It.  But especially in 2020, seeing past these lies of the mainstream media would be intrinsically and even incarnationally linked to the continuation of the Word in our hearts, the only One who can dissipate the deceit of the world, the flesh and the devil.  This is why we must be obedient to a truly Catholic (and truly scientific) worldview even as political and physical things happen around us:  “If I have told you earthly things and you do not believe, how can you believe if I tell you heavenly things.”–John 3:12

Finally, I believe that the only way to see past the deceit that is coming at us from every direction is by looking to Mary.  The Immaculate Virgin Mary is the destroyer of all heresies. This is why the daily Rosary is so important: Without Mary helping you cut through the deceit of the media, you are likely to be deceived into an error upon which you may forfeit your salvation. An abundance of heresies in the last days is exactly why Mary (destroyer of all heresies) would be more important in 2020 than perhaps even all past ages of the Church:

The salvation of the world began through Mary and through her it must be accomplished. Mary scarcely appeared in the first coming of Jesus Christ so that men, as yet insufficiently instructed and enlightened concerning the person of her Son, might not wander from the truth by becoming too strongly attached to her…But in the second coming of Jesus Christ, Mary must be known and openly revealed by the Holy Spirit so that Jesus may be known, loved and served through her. The reasons which moved the Holy Spirit to hide his spouse during her life and to reveal but very little of her since the first preaching of the gospel exist no longer.—St. Louis De Montfort, True Devotion, #49

Whether the Triumph of the Immaculate Heart and the era of peace as promised in the apparitions of Our Lady Fatima be the full end of the world (and the return of Christ) or it be the long-awaited and prophesied époque of peace upon earth with the Angelical Pope and Great Monarch, we know that the few people who escape the deceit of the “rebellion” and the “man of lawlessness” will definitely need the destroyer of all heresies illuminating them at all times.

Praying the Rosary will be the great guarantor of both Incarnational Truth (dogmatic truth) and prophetic truth (perhaps called “political issues” today) for all those who wish to see the Beatific Vision.  The sad reality is that denying the historical Jesus or the true Catholic worldview as required in 2020 is both tantamount to denying the Truth. May we never be counted among those who “refused to love the truth and so be saved”—2 Thess 2:10.  Indeed, in those days of a global “rebellion,” the final Christians will need Our Lady to keep heresy-free like never before in history. 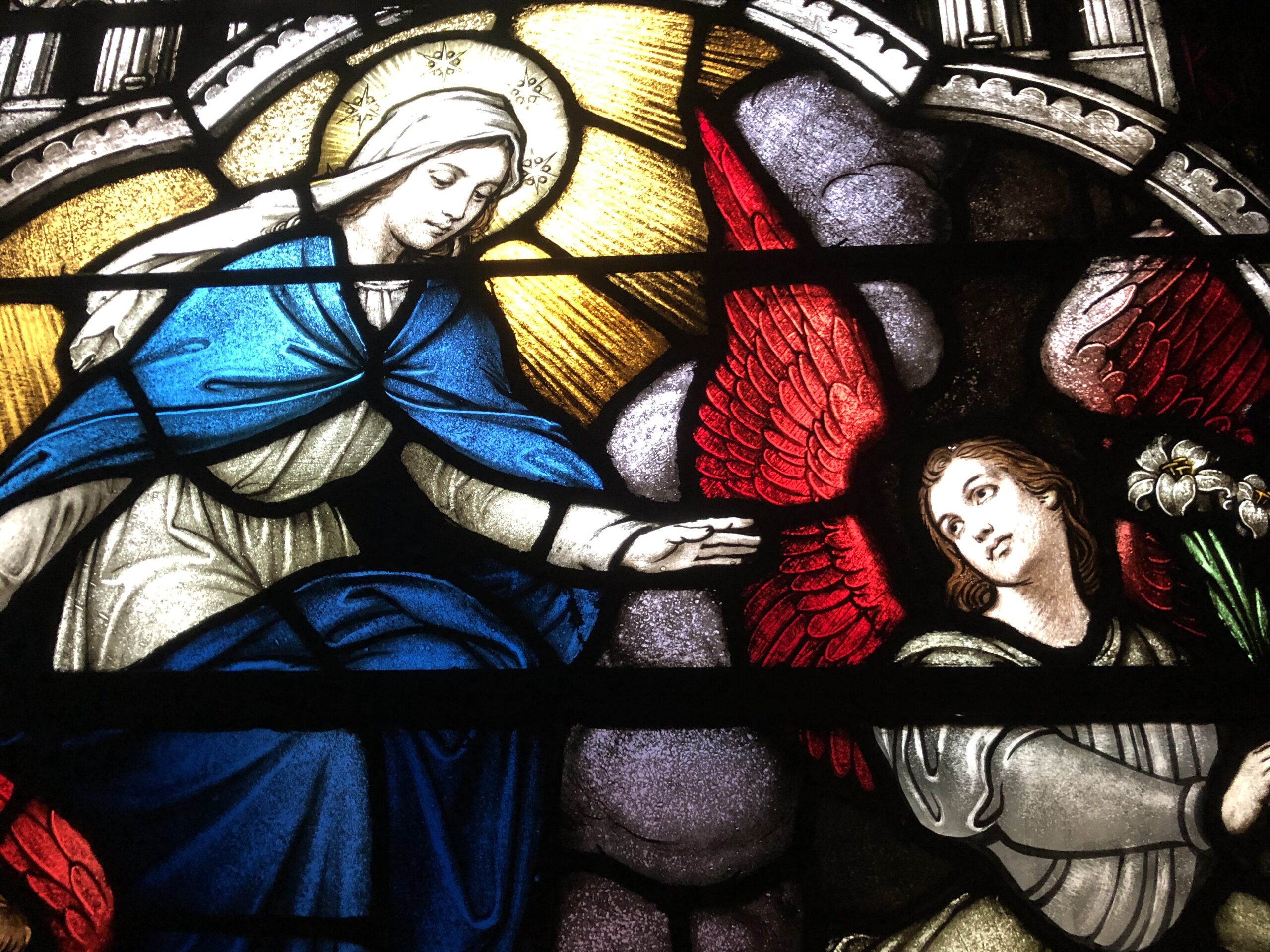