For this reason I, Paul, a prisoner of Christ Jesus on behalf of you Gentiles— assuming that you have heard of the stewardship of God’s grace that was given to me for you, how the mystery was made known to me by revelation, as I have written briefly. When you read this, you can perceive my insight into the mystery of Christ, which was not made known to the sons of men in other generations as it has now been revealed to His holy apostles and prophets by the Spirit.—Eph 3:1-5.

Notice above that the Apostle Paul says that “the mystery” (μυστήριον, mysterion) was made known to him by “revelation” (ἀποκάλυψιν, apocalypsin, unveiling.) What is unveiled? God’s plan for the salvation of mankind is unveiled. St. Paul continues in the same chapter into today’s Sacred Heart lesson of the TLM, also found in Ephesians chapter 3: “To me, though I am the very least of all the saints, this grace was given to preach to the Gentiles the unsearchable riches of Christ and to bring to light for everyone what is the plan of the mystery hidden for ages in God, who created all things.”—Ephesians 3:8-9.

Thus, we can say of Divine Revelation that man’s salvation has neither an origin nor a destination in mankind itself. Man’s origin is God Himself. Man’s destination is God Himself (by grace, should we cooperate with the cross.) This destination is nothing short of heaven. And Jesus is not “the priviledged route” as ecumenism suggests.  Rather, as St. Paul wrote above of himself, he was the unique standard bearer of Christ Himself “to preach to the Gentiles the unsearchable riches of Christ, and to bring to light for everyone what is the plan of the mystery hidden for ages in God.”

In the above video at minute 1, Tucker Carlson says “But democrats know better than that. They don’t lie to themselves.  They understand there is a revolution in process…Like all revolutions, the point is to destroy the current system and replace it with something new…Our current system has been in place for hundreds of years.  It’s based on a very simple idea:  All people are created by God with equal moral value.  Period.  Every one of them.  For that reason, and that reason alone, all Americans are treated equally under the laws of the United States.  In this country, we judge you for what you do, not for how you were born.”

It is striking that Tucker Carlson says that the USA is in the midst of nothing short of a revolution. Let’s remember that revolution is defined as “an overthrow or repudiation and the thorough replacement of an established government or political system by the people governed…a radical and pervasive change in society and the social structure, especially one made suddenly and often accompanied by violence.” Notice again that revolution includes in its definition the words: overthrow; radical; pervasive; violent.

Last year in 2019, Tucker Carlson never would expected that in 2020, he would have to use the word “revolution” to describe the collapsing USA. Similarly, Archbishop Carlo Maria Viganò only recently admitted that the 20th century infiltration of the Catholic Church could be called a “revolution.” AB. Viganò admits in his most recent letter penned to the Catholic world at large that he uncritically followed (and even partly constituted) the modernist hierarchy: “I was one of the many people who, despite many perplexities and fears which today have proven to be absolutely legitimate, trusted the authority of the Hierarchy with unconditional obedience…Just as I honestly and serenely obeyed questionable orders sixty years ago, believing that they represented the loving voice of the Church, so today with equal serenity and honesty I recognize that I have been deceived. Being coherent today by persevering in error would represent a wretched choice and would make me an accomplice in this fraud. ” 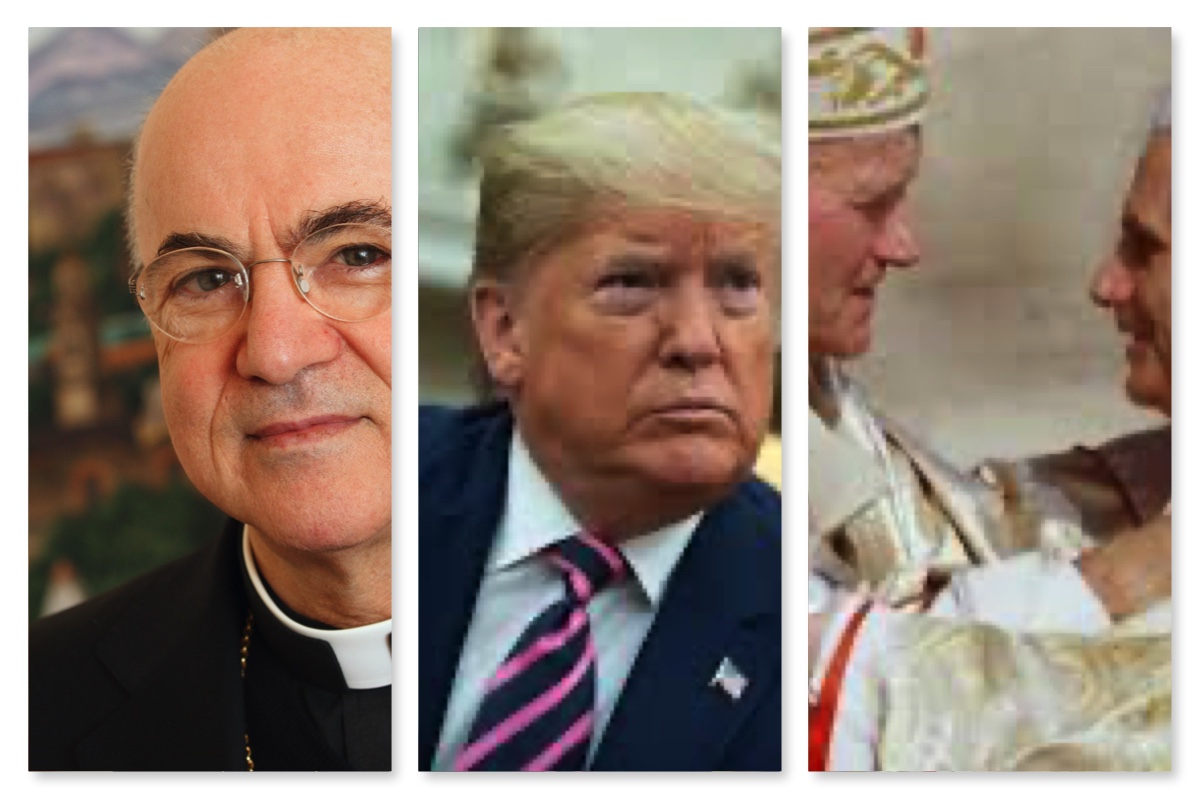 In fact, AB. Viganò uses the word “revolution” three times to describe not only the wonky implementation of Vatican II, but even the documents themselves as found in quotes of Viganò’s most recent letter:

The liturgy was revolutionized: “If we have a liturgy that is Protestantized and at times even paganized, we owe it to the revolutionary action of Msgr. Annibale Bugnini and to the post-conciliar reforms.”—Viganò

The morals were revolutionized: “On March 13, 2013, the mask fell from the conspirators, who were finally free of the inconvenient presence of Benedict XVI and brazenly proud of having finally succeeded in promoting a Cardinal who embodied their ideals, their way of revolutionizing the Church, of making doctrine malleable, morals adaptable, liturgy adulterable, and discipline disposable.”—Viganò

The faith was revolutionized: “Claiming a clarity of judgment from the beginning would not be honest: we all knew that the Council would be more or less a revolution, but we could not have imagined that it would prove to be so devastating, even for the work of those who should have prevented it.”—Viganò.

Tucker Carlson is an Episcopalian so he would probably not guess that the leadership in the United States will always necessarily be lagging a few moral clicks behind the clergy in the United States.  This isn’t my teaching.  It’s the teaching of the saints:  Corruption in the state normally follows corruption in the Church. In fact, just as the Holy Mass is the summit and source of all grace on planet earth, so also sins done at Mass (including changes to the apostolic liturgy) flow like a filthy sludge to all corners of the globe.  Christ said: “You are the salt of the earth, but if salt has lost its taste, how shall its saltiness be restored?”—Mt 5:13a. Thus, if Viganò is correct that “a revolution” (a word he uses no less than three times in his last letter) overtook the Church, then we can not expect the US government to behave any better than US clerics who follow a man-based “revolution.”  Indeed, we can only expect a man-based revolution and anarchy from governmental leaders if we have nothing better from us clerics.

Also, the anarchy of burning cities in 2020 and destroying statues is simply the symptom (not the cause) of the end of our country that took place in 1973:  The legalization of the killing of the smallest children all yet unborn.  We must remember that transgender marriage and the eradication of police departments and drag-queens reading to children in libraries is all the effect of the very worst sin of all of these:  abortion.  (And, like I said before, the only sins commensurate with this would be the sins against the Holy Mass and the pagan idolatry that made it to the Vatican in 2019 in the Pachamama incidents.  Probably child-trafficking is right up there, too.)

This means that the only way out of this violent revolution in the United States is a return to Divine Revelation. And that has to be complete, 100% return to the Creed, minus the ecumenism and modernistic ideas of “religious freedom” (as if our rights came from man!) and the errors of collegiality that reject the unique promise of Christ to St. Peter surrounding the Papacy (Mt 16.)  The “revolution” must be rejected if we want to save the human aspect of the Church and the structure of the United States of America.

Our country will continue falling into the new satanism of a revolution of worshipping man (yes, the new satanism worships man, not satan, for the most part) until the Catholic Church rejects this thing that Archbishop Viganò calls “the revolution” of the Church.

This will be signaled by a specific consecration of Russia to the Immaculate Heart of Mary by a holy Pope and all the bishops as per Our Lady’s request.  Then we can courageously return to the articulated Faith and Morals and ancient Liturgy that Christ gave unstained and perfectly to the Apostles.  Christ’s unique Divine Revelation should lead you away from a man-based state and a man-based religion “to know that you were ransomed from the futile ways inherited from your forefathers, not with perishable things such as silver or gold, but with the precious blood of Christ, like that of a lamb without blemish or spot.”—1 Pt 1:18-19 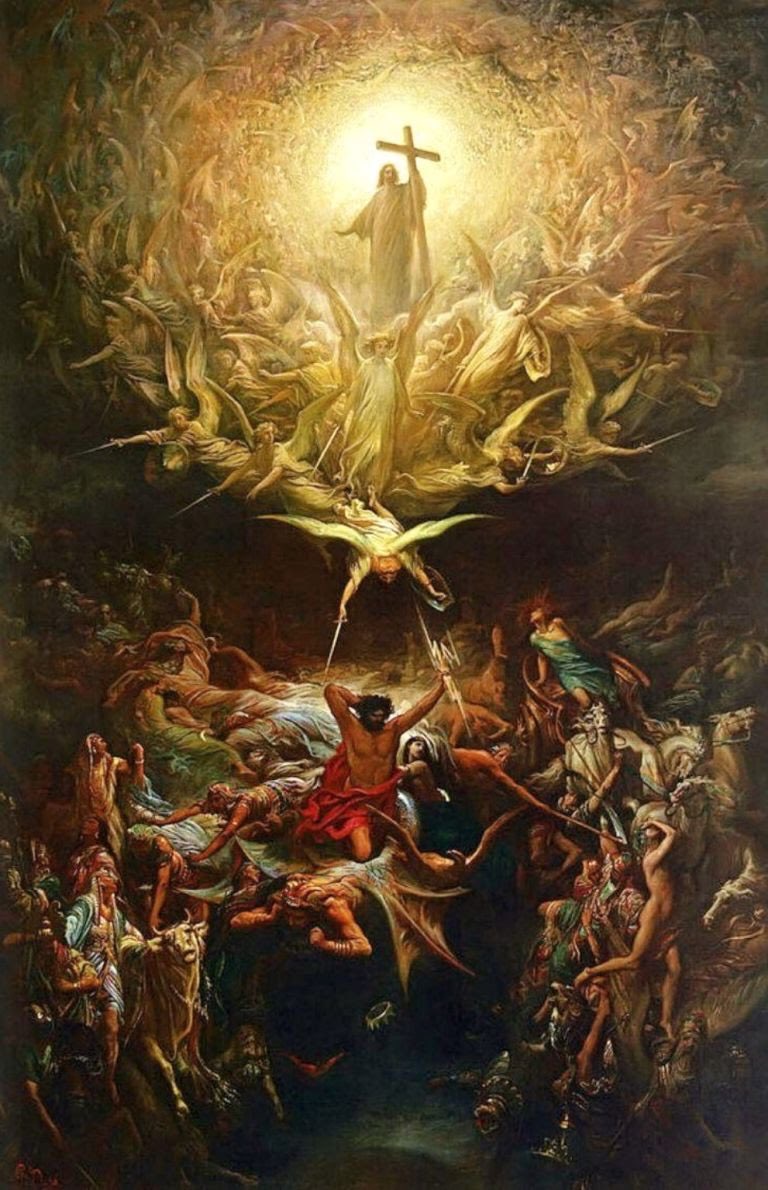 Featured Image at top Photo Credit: Melody Lyons. She took this just last week in a thunderstorm in her home state. I thought it captured the REVELATION part of the blog above insofar as the rainbow is a sign of God’s covenant with man. I thought the lightning captured the REVOLUTION part of the blog post insofar as our tower of babel liturgy calls down the wrath of God, often symbolized (and literally found) in lightning strikes. Finally, the beauty of creation is found in the trees as a symbol that we remain God’s sons and daughters, beautiful as part of his creation. Though buffetted by our own sins, we remain precious and redeemable in the eyes of the Lord, especially if we return to Divine Revelation.  This is our hope to avoid “the wrath to come.”—Mt 3:7