The Priest and Our Lady

The best preposition is probably “through.” That is, the Eucharist came through me. The Catholic Church uses the verb to confect as seen in Canon Law: “Can. 900 §1. The minister who is able to confect the sacrament of the Eucharist in the person of Christ is a validly ordained priest alone.” This verb comes from the Latin conficere, meaning to produce or to effect. It’s a variant-stem of con-facere, meaning “to make with.” Combine these two roots, and we have something like “to effect with.” So, the priest is an instrument who effects something with God…but even then it is only Christ Himself saying Hoc est enim corpus meum, or “This is my body.” This is the summit of a priest’s day when he functions in the person of Christ. He also functions as the person of Christ when the priest says Ego te absolvo or “I absolve you from your sins…” (See John 20:22-23.)

It is the priest who confects the Eucharist. In my chapel in the picture above, I stared at Our Lord and I realized that this is another link between the priest and Mary:   Jesus came through Mary. In this sense, the priest is yet again like Mary: Jesus in the Eucharist comes through me. Although the dignity of being the Mother of God has no parallel, we can both say:  I do not make God. The priest only confects the Eucharist, and even that is God’s own supreme act of love and sacrifice lived through me at my fingertips.

But why was Mary such a perfect vessel? In some sense (and I mean this with the utmost reverence to the fact she is the Immaculate Conception and the Mother of God) it was because of what she was not. She was not impure. She was not arrogant. She was not self-centered. She was not a braggart. She had no concern with being popular. The Uncreated Light of the Blessed Trinity was too transcendent for man to see.  But at Christmas and Epiphany, the Divine Word was all of a sudden visible because of a pure prism with no selfishness. 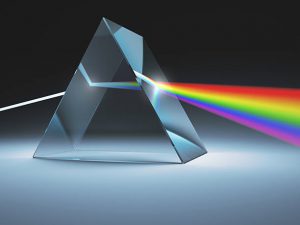 That prism is of course the Holy Theotokos, Mary, Our Lady.  Because of her purity, Christ could enter the physical world through her. Like a perfect prism, purity is more about what is not there. There are no blemishes, marks, scratches or cracks. Purity of intention is more than just matters of the sixth or ninth commandment. Purity of intention is to ascribe nothing to oneself. He must increase and I must decrease. In fact, the word arrogance means to ascribe something to oneself that should not be there.

The mystics tell us that no one in first century Israel was praying for the coming of the Messiah more than Mary. In fact, she only wanted to be the maid of the mother of the Messiah. That is all that she wanted—to be the sidekick of the Mother of the Messiah! Of course, it was her humility that “troubled”  her (Lk 1:29) at the greeting of the glorious angel Gabriel.

Perhaps this is why the best of the desert Fathers did not want to be priests.

I have a good female friend who does a lot of good for the Church, but she is still unmarried and she does not have a religious vocation. The one place she finds great consolation is the most mysterious of all lines of the Apostle Paul: God chose what is low and despised in the world, even things that are not, to bring to nothing things that are, so that no human being might boast in the presence of God.—1 Cor 1:28-29. I can almost hear that deep movie-preview voice say, maybe for a new Lord of the Rings movie, that mysterious line about some barely-existing creature that would change the world: “even things that are not…” I don’t think she realizes how much this humility makes her like Mary, even when she doesn’t understand her vocation.  This is how Mary saw herself, as something that was not. I don’t mean this in the way of self-pity or lack-of-self confidence.  It actually takes an extremely humble person to have self-confidence.

In fact, without humility, God could not have made her the most famous woman in history. Yes, “He hath regarded the humility of His handmaid; for behold from henceforth all generations shall call me blessed.”—Lk 1:48

What does this have to do with Our Lady’s priests?  As Archbishop Fulton Sheen got older in all his sermons and retreats, it seems to my listening ears (many years after his death) that there was a progression in all his talks through the 1970s of his growing concern about how many priests wanted to exert their own personality…to be funny, to be entertaining, to be relevant, to be hip. Archbishop Fulton Sheen would frequently boom a mockery-motto of the modern priest: “I gotta be me!” No, Mary did not need any of these things for Christ to come through Her. Rejecting popularity, she became the most popular woman in history. It’s quite a mystery, actually.

This is true for preaching, too.  We have had 50 years of the via positiva, people preaching from the pulpit that “God loves you.” And this is fine.  But there’s a detriment to no preaching the via negativa.  Years ago, when I first read the hellfire sermons of St. John Vianney, I was discouraged. When I first heard of St. John of the Cross, I thought that this saint spent too much time writing on detachment (the via negativa). Why not more time writing about God and His love? The answer is at the top of Mount Carmel: Because at the top of Mount Carmel, when one’s spiritual ego is totally sunk, the only thing that one experiences is in the honor and glory of God. 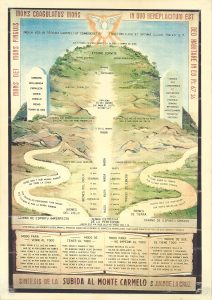 In blue-collar terms: All we need to do is reduce the bad, and God will do His job of turning up the good.   The great saints of old spent so much time preaching against vice precisely because they were sure that God would do his job of shining through us if we could discipline ourselves (of course after the unmerited forgiveness of the blood of Christ arriving via the sacraments and faith.) The preaching of detachment was ironically a brilliant plan to make saints in love with God even more than the modern preachers who demand that we all become “saints in love with God” without any plan, without any content.  The call to surrender without content is comforting…but not for long.    People now again long for the clear moral directives of the old saints and Popes again.  The old-school spiritual writers who wrote so much pro-detachment and anti-vice seem to have treated the spiritual life as an aqueduct:  In a non-Pelagain way, after the grace of our initial conversion, the walls of discipline need to be built by us, and then the Divine Water will flow constantly. 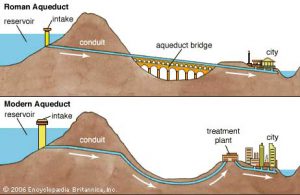 My favorite line from GK Chesterton is: “And the more I considered Christianity, the more I found that while it had established a rule and order, the chief aim of that order was for good things to run wild.” Rules make us run faster!  The zealous and scary saints like St. Vincent Ferrer spent so much time preaching on the moral life not because they thought the moral life is the end-all be-all of the life of grace, but because they knew that if we drew strong parameters, the aqueduct bridge of grace would flow quickly into our lives.

This was true for the Apostle Paul:  “For to set the mind on the flesh is death, but to set the mind on the Spirit is life and peace. For the mind that is set on the flesh is hostile to God, for it does not submit to God’s law; indeed, it cannot.”—Rom 8:6-7.  This certainly includes sexual sins for any vocation, for the Spirit of life cannot reside in a body that is impure: “But if Christ is in you, although the body is dead because of sin, the Spirit is life because of righteousness.”—Romans 8:10. All vocations must live this purity, but especially the priest. St. Alphonsus Liguori said that the priest who confects the Eucharist in mortal sin actually tags four new sins onto it!

But as I wrote earlier, this is not only about purity in body. Purity of intention is to want only one thing. That one thing is God’s glory, that is, sinking popularity and personality-cult followers. The priest must be like Our Lady, to want God’s glory alone, even at the price of a funny or witty mind.  The truth is:  None of it matters to Our Lady.  She loves her priests, but not our egos.  She knows that especially the priest’s heart will ebb and flow in one front of love and purity and orthodoxy as the Catechism points out:

The sixth beatitude proclaims, “Blessed are the pure in heart, for they shall see God.” “Pure in heart” refers to those who have attuned their intellects and wills to the demands of God’s holiness, chiefly in three areas: charity; chastity or sexual rectitude; love of truth and orthodoxy of faith. There is a connection between purity of heart, of body, and of faith: The faithful must believe the articles of the Creed “so that by believing they may obey God, by obeying may live well, by living well may purify their hearts, and with pure hearts may understand what they believe.”—CCC 2518

How about the via positiva?  How do we get to God through positive actions?  In some sense, it really is how much time any of us in any vocation we spend with the Eucharist and with Our Lady.  It’s not that God counts how many prayers we do (though He does know this, of course) but rather, as the Catechism says:  “The choice of the time and duration of the prayer arises from a determined will, revealing the secrets of the heart.“—CCC 2710

Why is the pathway to high levels of supernatural love in the 21st century going to be found in much time with the Eucharist and the Rosary?  Because St. John Bosco predicted these days 150 years ago in his prophetic dream:  “Very grave trials await the Church. What we have suffered so far is almost nothing compared to what is going to happen. The enemies of the Church are symbolized by the ships, which strive their utmost to sink the flagship. Only two things can save us in such a grave hour: devotion to Mary and frequent Communion. Let us do our very best to use these two means and have others use them everywhere.” 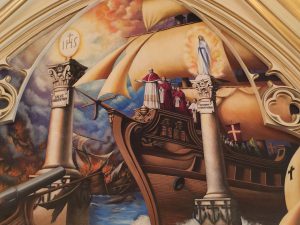