This is an edited re-post of a little-known blog I wrote when I was last in Rome. I originally called it “Peter and Paul” but two other titles that fit are: “Why Eternal Rome will Triumph over Temporary Rome” or “Why the hierarchical Church was no different from the charismatic Church.”

Most of us Americans picture the early Christians of Rome being physically underground but spiritually free. Then, everything changed in 313 when Constantine’s edict of Milan reversed the course of history, allowing Christians to be physically “above-ground” but spiritually oppressed by the Emperor and Pope who inadvertently became strange bedfellows. The idea of the pre-edict-of-Milan Christians being “more free” is attractive to the American Protestant way of thinking precisely because of the separation of Church and State and preference to reject authority making demands upon one’s own personal way of worship.  [footnote] In fact, Protestant Biblical scholar Elaine Pagels pointed out in 1981 that early Gnostic communities believed that “one’s own experience offers the ultimate criterion of the truth, taking precedent over all secondhand testimony and all tradition.” This was quoted by Kathleen Kautzer in her book (and pay attention to this title) “The Underground Church: Nonviolent Resistance to the Vatican Empire.”  This should set the stage for the false-dichotomy tackled in this post. [/footnote]

But those who come to this conclusion are now realizing that the premise must be true. And the premise is essentially the million dollar question of early Church history: Was the hierarchical Church and charismatic Church separate in her very earliest days in Rome? If separate, it means that we Catholics have Apostolic Succession but the Protestants have the Holy Spirit. If united, it means Catholics have both. Why? Because the earliest saints in all of their ecstasies, miracles and tongues would have been subject to their bishop who was either in Rome or in union with Rome. 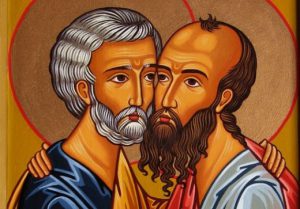 The funny thing is that this question may sometimes be personified in the life of St. Peter and St. Paul. In most people’s minds, St. Peter represents the hierarchy where St. Paul represents love. Protestants will hesitatingly admit that Peter lives in an unbroken line of Popes (as long as they first point out that Paul corrected him in Galatians.) The Catholic response becomes: “Ok, you guys got St. Paul but we got St. Peter!” (This is essentially “You guys have the charisms but we have the Magisterium.”)

Stop reading my blog if I ever turn my blog posts into a travel log, but I sincerely believe the answer to this question comes from an archeological find.  I was directed to this find by others, and I made it a point to visit a certain location as I spent Holy Week 2016 in Rome (and Easter Week on the coast of Italy.  Yes, it’s hard to be a priest in exile.)  I think the answer to the “million dollar question” is found in a small building called St. Pudens, located less than a kilometer away from the enormous St. Mary Major.  St. Pudens is sunken, as it is surrounded by a Rome that has been rebuilt around her several times.  I took this picture from ground level: 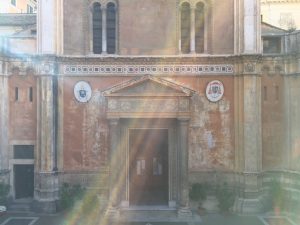 This first century building was the home of a Roman senator named Pudens. After being converted by St. Peter or St. Paul, he was baptized as can be seen from this painting inside his “home,” attended to in his baptism by none other than the juggernaut Apostles Peter and Paul: 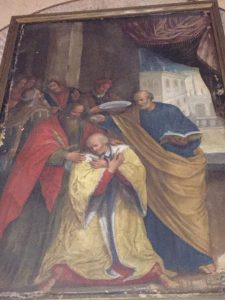 He turned his home into a home-Church, as a staging area for the electrifying Christianity of both St. Peter and St. Paul. As Rome became the Central Nervous System for all of Christianity, Peter and Paul needed a influential bridge to the empire and the people. This was fulfilled by Senator Pudens (later St. Pudens in the Catholic Church.)  In fact, Pudens was so important to early Christianity that the Apostle Paul mentions him in his second letter to Timothy:

“Do your best to come before winter. Eubulus sends greetings to you, as do Pudens and Linus and Claudia and all the brothers.  The Lord be with your spirit. Grace be with you.”—2 Tim 4:21

What this reveals is that the Roman Church was united in her hierarchy and charisms.  This senator-become-saint in his home-become-Church remains a physical symbol of the spiritual union between the hierarchical and charismatic Church. Yes, St. Pudens is dwarfed by the enormous St. Peter’s Church in the distance of the Vatican, but Pudens is still an active parish, containing the relic of the wood upon which St. Peter offered not his first Mass but rather his first Mass in Rome as seen in the first picture below. [footnote] The second picture below is the plaque next to the relic.  My best attempt at a translation is: “In this temple, St. Pudens was the first host of St. Peter, prince of the Apostles, whose Christian faithful approach to receive the most Holy Sacrament of the Eucharist.”  You can email me any corrections if my Latin is off.  [/footnote] 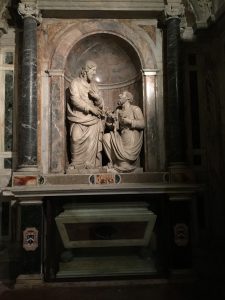 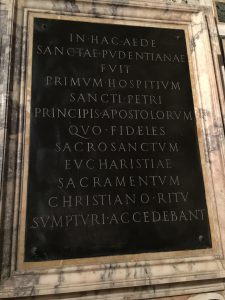 Yes, this Church is still a functioning parish of the diocese of Rome! It is mostly Vietnamese today.  There is a painting above the altar of Pudens with Peter and Paul: 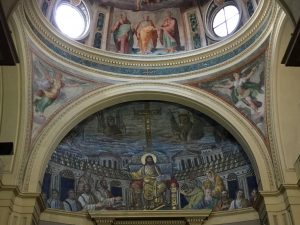 Yes, Paul corrected Peter in Galatians, but this does not mean they were not dear friends!  If you have ever known any middle-easterners, you know that they could yell at each other and still take a bullet for each other.  It is we who have the broken culture in thinking that a silent-backstabbing is better than an honest disagreement.   The hierarchical and charismatic Church remained beautifully united in Saints Peter and Paul,commemorating a first century relationship of brotherly love, respect and evangelization of Peter, Paul and Pudens. 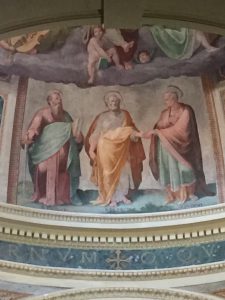 I have been to Rome about five times, but I haven’t been there in seven years. I arrived with the hopes of finding St. Pudens, but ignoring St. Peter’s as if in a lover’s quarrel with the Vatican. (I literally was afraid to look at the Vatican with all the stuff coming out of it these day.) But that first night in Rome, when my priest friend and I came around the corner and saw the Vatican lit up at night, I literally fell to my knees at the sight of it, praising and thanking God for the Church. 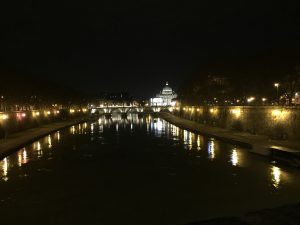 I know Christ tells us to not be seen praying in public, but it was dark that night on the Tiber and few could see me. Kneeling, I asked my Australian priest friend (who studies there in Rome) if I could pray for the Church there for a minute. He said yes and put his hand on my shoulder. I had definitely not planned on this. That enormous, glorious building—that I had planned on not looking at as if pouting—completely overwhelmed me with the sense of the glory of 250+ Popes and martyrs shining through it and all around it that night. I felt God transmitting to me a confidence in His Church in an overwhelming feeling of His power. 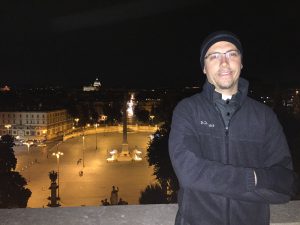 We returned home, but the priest with whom I stayed in Rome had a spectacular view of the whole city from his roof at night. This overwhelming feeling of God’s power strangely continued every time I went up the roof over those two weeks to pray whenever I looked at St. Peter’s, alit. Every time I looked at the shimmering shining solid St. Peter’s at night, I did not see an individual Pope like I thought I would “see.” I “saw” my bride, adorned with the blood of thousands of Roman men and women who died—in some sense—for me to have the fullness of Faith. I saw that building every dark Roman night like a New Jerusalem already on earth, transcending certain individuals with the Faith that I love so much, uniting Apostolic Succession and extraordinary charisms in her saints, charged with the very glory of the crucifixion. 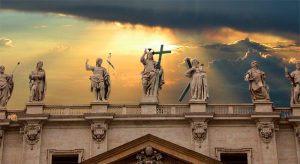