Is Your Marriage Valid? 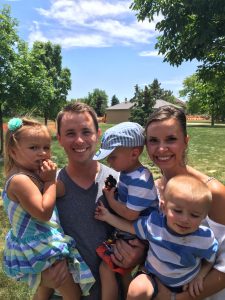 I know this isn’t the most romantic question on father’s day, but as a spiritual father to biological fathers, I think you’ll find this very encouraging by the end of the article.

First, we must understand that it is God who forms the bond of a sacramental marriage when two people in freedom say “I do” and consummate the sacrament that night.

Secondly, what is often called “an annulment” among Catholics is actually better described as a “declaration of nullity.” When a forlorn couple asks their diocese to investigate if they were ever married, the diocese may find real problems and declare it “null.” These problems have to be pre-existent (before the wedding) because a declaration of nullity is basically when the diocese says to the couple: “In our best guess, you never had the ability at the altar on your wedding day needed to consent in freedom to a sacrament.” Notice that this is not an efficacious act, since Jesus said: “What man has put together, let no man put asunder.”—Mark 10:9. Rather, it’s a “best guess.” So, the couple is free to go marry someone else in good conscience, provided they were honest in the investigation.

I once heard that the USA has 25% of the world’s annulments, and I am only slightly less sure that the great majority of these fall under a little code in the Catholic Church Code of Canon Law called “lack of due discretion.”  Other reasons are in this footnote here:1

But it was surely to the tune of “lack of due discretion” that a certain someone recently said that our post-modern “culture of the provisional” means that a “great majority of our sacramental marriages are null, because [the couples] say, ‘yes, for my whole life,’ but they don’t know what they’re saying.”

Now, in defense of the abovementioned person, Canon Law 1066 states: “Before a marriage is celebrated, it must be evident that nothing stands in the way of its valid and licit celebration.” We priests are responsible for this preparation, but few of us do anything but the wedding Mass. So, maybe home boy is correct: Post-modern man is too much of a clown interiorly to be able to choose a size of coffee at Starbucks much less a spouse. 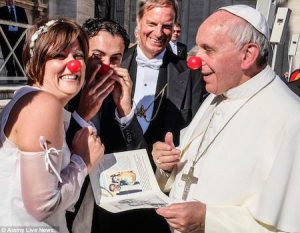 If a marital bond is harder to form these days, then annulments should be easier to obtain.  Thus, home boy is consistent with his September decision to make annulments easier. It would only make sense to have a high bar theologically to marriage (easy annulments) if he were to couple this to a high bar anthropologically…that no one can meet, hence…his new statement that “a great majority of our sacramental marriages are null, because…they don’t know what they’re saying.” (italics mine)

But this is pure conjecture, and Pope John Paul II saw where this excessively high bar of marriage would take the Church in the West: A world where every married person lives in fear a few years into marriage that he or she did not form a valid marital bond, especially when suffering arrives. “Were my words true at the altar?” We are all broken people with mixed motives and imperfect love as we approach our vocation (single-consecrated, religious life, priesthood, marriage.) In short, we all have “lack of due discretion” as we approach any vocation. Where is the threshold for the extreme cases?

Happily, Pope John Paul II gave very clear parameters on determining “lack of due discretion.” On 25 February 1987, JPII wrote that a “real incapacity is to be considered only when an anomaly of a serious nature is present.”

“[A] real incapacity is to be considered only when an anomaly of a serious nature is present.”

What would an explicit and formal rejection of the Church’s teachings be?

2) People who never planned on staying married to the same person until death.

Even contraception on the wedding day would not be grounds for annulment, since contraception in marriage does not constitute a formal rejection of the Church. Don’t get me wrong:  Contraception inside or outside marriage is still a mortal sin. This is first because “the Pill” is an abortifacient that kills nearly half a billion children a year. Even for less serious methods that were around in the 13th century, St. Catherine of Siena was given a mystical vision of married couples in hell who had simply used the barrier method and not confessed it. So, I’m not saying contraception makes a holy marriage. But it does allow a sacramental and valid marriage.  Many of these people have conversions along the way.  I praise God:  They move from having a valid marriage to a valid+holy marriage.

As for the unitive side of marriage: What if a man thinks of an old lover on his wedding day? Five years later can he look back on his family and tell his wife he had big-time “lack of due discretion”? Not according to Pope John Paul II. Even a whole nest of butterflies in the stomach on your wedding day does not constitute “a formal and explicit” rejection of the Catholic Church’s tenant of monogamy.

If anyone is to blame for all these annulments, it is us priests.  We were the first to tell lay people to start doubting the Church’s teaching on contraception in the 1960s.  Even nowadays, few priests give the couples any investment in teaching and discipleship.  However, my first pastor taught me to never marry anyone I haven’t met with five times, and I still follow this.  This isn’t perfectionism.  It’s just that most people will follow the Truth in love when they hear it for the first time, even if it means a conversion.  Maybe half of the young couples convert. The other half just plays me like a fool since  grandma likes the look of a nice old Catholic Church.  I try to get these people to be honest with themselves and go find a good justice of the peace or a priest that doesn’t care about them.

But for those who are even willing to try the Church’s teachings with me, I remind them: Jesus favored the bond for His Church as He died for her, even as He saw through time all of the unfaithful family members (and faithful ones), bad priests (and good ones), honest Tribunals and dishonest ones, the Pope-martyrs and even the 5-10 heretical Popes.  Jesus loves His messy Church through an equally messy crucifixion. This is His example of marriage.

Thus, imperfectly married Catholic couples: Rejoice! You’re still married despite the debate in the news today. Really, folks, if you’re married, you should consider it great news that you don’t have to be perfect to be married, at least according to Pope John Paul II (and his teachings on this are magisterial, where you-know-who here are off-the-cuff.) All I mean in this post is this:  FIGHT FOR YOUR LOVE INSTEAD OF DOUBTING IT (especially based on one comment from one single Pope who was speaking with no infallibility at that moment.)  2

If you got an annulment, I’m not saying you should look back in doubt. The Church has accurately declared many putative-bonds to be null, based on this code “lack of due discretion.” So, I’m not declaring null all declarations of nullity! I’m simply saying that currently married people should not look back and think too much about a possible annulment. This is because on your wedding day you were never made to know all the crosses that would come. Jesus didn’t promise all the answers to the problems of marriage, but He did promise to walk with you through them all. Even if it has been a hard marriage: Be confident that God is with you and that your spouse is with you in a real, sacramental bond.  3