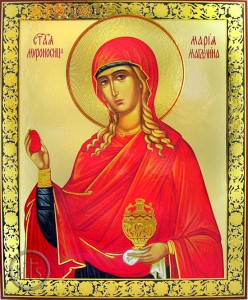 Before I was a priest, I was a paramedic.  I remember running a call with the SWAT team in Southwest Denver. It was a midnight drug-bust and we had to accompany the police in the event that someone become wounded in the raid. We entered minutes after the SWAT team…and it had a pretty anticlimactic ending.  The police arrested only two people.  The young man and woman were caught in a compromised position, so to speak…and it smelled filthy. I was surprised at the stench, and it wasn’t the smell of drugs that was off-putting. Later in seminary, I remember reading on my own about how certain saints (like St. Christina the Astonishing) could smell impurity on people. I’m not claiming that the SWAT team or I had that gift. I just mean that there is a natural and a preternatural link to the fact that impurity stinks, literally.

Today, on both the old and new Catholic calendars, it is the feast of St. Mary Magdalene (22 July.) She too was filthy and with demons before meeting Jesus.  How interesting, then, that the Tradition Latin Mass Gospel of today recognizes the following woman as St. Mary Magdalene:

Then turning toward the woman, [Jesus] said to Simon, “Do you see this woman? I entered your house; you gave Me no water for My feet, but she has wet My feet with her tears and wiped them with her hair. You gave Me no kiss, but from the time I came in, she has not ceased to kiss My feet. You did not anoint My head with oil, but she has anointed My feet with ointment. Therefore I tell you, her sins, which are many, are forgiven—for she loved much. But he who is forgiven little, loves little.” And He said to her, “Your sins are forgiven.” Then those who were at table with him began to say among themselves, “Who is this, who even forgives sins?” And He said to the woman, “Your faith has saved you; go in peace.”—Luke 7:44-50

There is a mention in another Gospel of the smell surrounding Mary Magdalane:

Mary anointed the Feet of Jesus, and wiped Them with her hair; and the house was filled with the odour of the ointment.

This quote from John 12 was actually the morning prayer antiphon taken from John chapter 12. Thus, the ancient Western Church took the controversial women of Luke 7 and John 12 to be both the same person:  St. Mary Magdalene.

But notice the word “filled” in the above italics from John 12:3.   The word “filled” comes from the Latin impleta or Greek “ἐπληρώθη,” meaning that the whole house was filled with that smell of that spiked nard of extremely rich oil. What the ancient liturgy is telling us in placing those words in the morning-prayer antiphon is clear: No longer was the house filled with the stench of the sins of impurity.

Not only is Mary forgiven, but the smell of purity fills the entire house. The house is clearly analogous to the temple that is the body of St. Mary Magdalene. She now sits in the home, at Jesus’ feet, not only cleansed from her sin, but with a pacifying inebriation that comes from the anointing of a transformed soul.  She is beautiful and clean, and everyone can detect this, except those who remain in spiritual pride.  They remain in pride because they refuse to trust in the One they simply call “master.”

Remember also that oils were used to clean wounds. The stripped and half-dead traveller by the side of the road is approached by the good Samaritan who “binds up his wounds, pouring on oil and wine.”—Luke 10:34. In ancient culture, oil was used to clean wounds, assumedly because most bacteria could not survive when drowned in strong oil.  Thus, Jesus doesn’t just take away the juridical imputation of sin, but at that point makes her strong again, inside and out, through and through, to the point that the overwhelming smell of spiced nard fills the whole house, the whole new life of Mary Magdalene.

This is not just post-modern presumption of God’s mercy. How do I know? Because within the ancient office of readings that we pray (the Divine Office) there is the equally astounding call-and-return a few hours later within the Psalms called “Tertia,” still referring to St. Mary Magdalene:

Who would have thought that the Messiah would spiritually wed the Magdalene? But the ancient liturgy today is clear: God-Incarnate, Jesus Himself, is calling a soul once-filthy to be His bride, for she is now filled with comeliness and beauty. So go forward, and reign in that anointing that fills the whole royal house with Christ your king, your spouse.  Forget your past, for you now exist in comeliness and beauty.