The earliest age of the Church was the age of blood martyrs. As I currently am reading the Victories of the Martyrs by St. Alphonsus, I am repeatedly shocked how spontaneously the earliest Catholic men and women and children chide their Roman procurators for their pagan worship. Before the threat of flames, little girls openly declare they would rather suffer several minutes in the flames than the eternal flames to which the Roman procurator will throw himself if he does not repent for his idolatry.

That early age of the Church carried the physical cross of Jesus Christ. Indeed, many of the early martyrs were literally crucified, as was Our Lord Jesus Christ.

Then came the Edict of Milan. Early Church-history easily disproves the silly Protestant notion that AD 313 marked the bifurcation of the “charismatic Church” and the “hierarchical Church.” Early documents quickly disprove accusations that the Papacy was corrupted at such an early age of Church history. Something like 28 of the first 30 Popes were all martyrs. However, it is true that the legalization of Christianity in 313 AD made it a little easier to carry the cross of Catholicism across the Empire. Thus, it became popularized. And popularization sent some (but not all) of the most serious Christians from the cities to the desert to find solitude and intimacy with God.

That second-age of the Church in the desert carried the cross of Our Lord’s near-starvation fasting in the desert, as well as tremendous temptation in silent battles with the devils. Of course, it seems every age of the mystical body of Christ carries a difference facet of the cross of Our Lord. Remember Jesus did not say to Saul “Why are you persecuting my Church?” but rather “Why are you persecuting ME?” This happened when Saul was persecuting the Church herself. Later, Saul was given the answer interiorly as St. Paul as he wrote, “Now I rejoice in my sufferings for your sake, and in my flesh I am filling up what is lacking in Christ’s afflictions for the sake of His body, that is, the Church.”—Col 1:24.

Currently, in the Far-East and in the Middle-East, the martyrdom of Catholics is clearly a very red martyrdom. Countless Christians are executed by communists and Muslims every day. (I challenge anyone who doubts this fact to join me on a podcast and we’ll debate the numbers.)

But in the Western hemisphere, the martyrdom of the Mystical Body of Christ (at least for those who take the traditional faith seriously) is a white martyrdom unlike any age of history. Why is this martyrdom white so unprecedented? Because the marytrdom comes from persecution within the Church.

Now, I now many will now say “Oh no, no! Most saints were persecuted from people within the Church.” Yes, that is true that many great saints (like Padre Pio) were persecuted by prelates out of jealousy for their extraordinary gifts. But never in Church history (except maybe the Arian crisis) have we seen a global persecution against anyone who holds to very low-level orthodoxy in the Western Hemisphere. St. Vincent of Lerins said long ago that in any Church crisis of confusion, we can be on solid ground by holding to the ancient faith as it was kept ubique, semper and ab omnibus (everywhere, always and by everyone.) That is, we are called to keep the faith and liturgy by not following the current spirit of the world, but rather clinging to the faith and liturgy of all past saints, Popes, confessors, martyrs and virgins.

But this time in the 21st century is unlike the Arian crisis in that even the Vatican and average bishops gaslight traditional Catholics. I meet many traditional Catholics in the Western world who are striving for holiness and yet they seem to be the mystical body of Christ living a reflection of Jesus in the garden, carrying a tremendous psychological burden. I read a lot of Church history, and never have I seen before open idolatry of a Pachamama in the Vatican with those who stand against Roman idolatry as the “disobedient ones.”  Does anyone realize how insane this is?   We’re not talking advanced Christological errors.  We’re talking about standing against Roman pagans under the guise of prelates re-introducing pagan Pachamama worship into Rome.

Or, if traditional Catholics are not like the saints, and we are just the rigid “disobedient” ones, then why did St. Vincent of Lerins admonish all Catholics of his age of the Arian crisis to hold to those arcana verba of Apostolic Catholicism believed ubique, semper and ab omnibus (everywhere, always and by everyone.)? Is that not the litmus test of who is carrying the cross of the mystical body of Christ above and beyond the spirit of the age?  Why are Catholics who hold to really basic teaching on the 6th commandment now being called “a problem” in the Church.

Such a rebuttal is partly correct, namely, that we have no example in history in which we can claim gaslighting from the Vatican for simply trying to be traditional Catholics. Maybe we trads are all self-made white-martyrs of disobedience, clinging to ways of the past when “the spirit” has moved the Church to dialogue and mercy.

But here’s problems with that: First, Traditional Catholics are never treated with “dialogue” or “mercy,” from about 1960 onwards. We are constantly lied to and lied about. So if we’re wrong about the hermeneutic of continuity, it would not take constant acts of mendacious subterfuge to disprove our requests for “dialogue” and “mercy.”  But it seems all prelates had much more time to meet with Hindus and Muslims than to meet with people like AB. Lefebvre or Bp. Bishop Antonio de Castro Mayer. This has been the case for over 60 years. Why are we to be so feared if we do not have the Truth?

Secondly, all of this persecution of traditional Catholics will only make sense when we see the true Third Secret of Fatima. I have been studying the Third Secret a lot the past five years, and every expert I read holds that the Third Secret comes down to One Thing: General Apostasy in the Catholic Church from the Top-Down. Notice that if that was God’s warning through His own Mother in 1917, then our refraining from following heretics is not only a lack of disobedience—it is actually required for the salvation of our own souls. And that is a terrifying martyrdom when you realize we all want to be obedient to someone not just in heaven, but here on earth. Compare this current crisis even to the Arian Crisis or the psychological torture of the English Catholics of the 17th century, and you will see most of them had at least someone to think of in Rome, even when they felt abandoned by their own family or bishops.

Yes, these are truly unprecedented days of a changing crucifixion of the Mystical body of Christ carrying a white martyrdom in [an albeit pale] reflection of Christ in the Garden at Gethsemane. Only Fatima’s Third Secret will explain why, for example, God asked the modern Popes to consecrate Russia (something never done) and how this has led to the psychological torture aimed towards traditional Catholics who side with Our Lady in a simply calling for Russia’s consecration. To be called “disobedient” for siding with Our Lady is not anything any of us want. But… here we are.

I am not saying I have the strength to undergo red-martyrdom right now. By God’s grace, one day, I hope to be able to say yes. So I’m not saying we traditional Catholics are saints. But navigating the gaslighting accusations of “disobedience” from superiors for doing what the Church has always done—not just for holding to the TLM—but even for holding even to the most basic parts of Catholic morality (like stopping Roman pagan idolatry) has led to an unprecedented martyrdom of so many I know, precisely because we have never seen an infiltration of the hierarchy to this extent in 2,000 years.

But we only carry a sliver of the cross. For we must guess that part of Christ’s shock and sorrow in the Garden was that He Himself was handed over to a Roman crucifixion by His own spiritual fathers in religion. 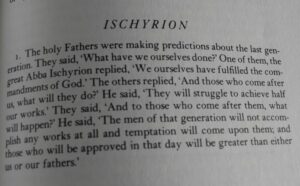