The amice is the neck and shoulder sweat-guard that is the first item put on by a Roman Catholic priest while vesting for Holy Mass.  The priest touches the amice to his head as a blessing as he prays:  Place upon me, O Lord, the helmet of salvation, that I may overcome the assaults of the devil.  I say that prayer in Latin before every Mass, which is: Impóne, Dómine, cápiti meo gáleam salútis, ad expugnándos diabólicos incúrsus.  After the amice touches the priest’s head, he wraps it around his shoulders and ties it across his torso.  Besides being a blessing and a sweat-guard, the amice also covers the cassock (or a habit in my case) with white below the neckline but above the dip in the center-chest of the fiddleback chausible: 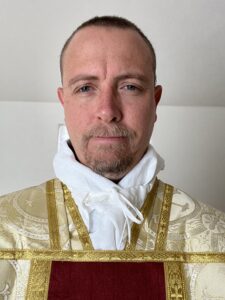 Monks, however, must cover not only their chest and shoulders, but also their cowl (hood.)  Thus, monks and religious need to find what is called a “monastic amice” that covers shoulders and cowl.  Since becoming a diocesan hermit, I have attempted to purchase a monastic amice online, but they are nearly impossible to find.  My mother tried to buy me one for my birthday, but that was also a dead-end.  Ultimately, I found a monastic-amice at a local traditional priory, normally used by the traditional Benedictine Monks from Our Lady of Guadalupe Monastery in Silver City during their occasional visits to a local parish.  With permission, I borrowed it and gave it to my friend Liz as a template.  Liz copied it and made me a monastic amice.  It’s seen in the two pictures above, and below. 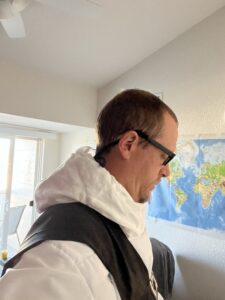 The monastic amice covers the cowl (hood) so that there is uniformity to the priesthood at the altar, be the priest diocesan or religious.  Or my unusual vocation of diocesan hermit functioning as a monk-missionary.  I’m thankful to my friend Liz for making what was very hard to find online or in any store, as the monastic amice is a rarely sought-after liturgical item in the Roman Rite.  Ultimately, it’s to cover that habit’s hood that sticks out the back during my day-to-day life. 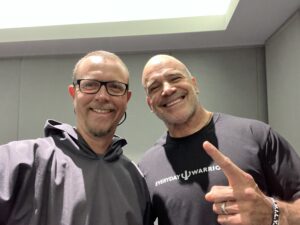 Bas Rutten and me