St. James Intercisus’ martyrdom from Butler’s lives of the saints, reprinted with permission of Sensus Fidelium.  St. James’ feast day in the Roman Martyrology and the Eastern Rites is 27 Nov.

St. James was a native of Beth-Lapeta, a royal city in Persia, and a nobleman of the first rank, and of the highest reputation in that kingdom for his birth and great qualifications, both natural and acquired, and for the extraordinary honors and marks of favor which the king conferred upon him, and which were his most dangerous temptation. For when his prince declared war against the Christian religion,† this courtier had not the courage to renounce his royal master and benefactor’s friendship; and, rather than forfeit his favor, abandoned the worship of the true God, which he before professed. His mother and wife were extremely afflicted at his fall, which they ceased not every day bitterly to deplore before God, and earnestly to recommend his unhappy soul to the divine mercy.

Upon the death of king Isdegerdes they wrote to him the following letter: “We were informed long ago that, for the sake of the king’s favor and for worldly riches, you have forsaken the love of the immortal God. Think where that king now lies, on whose favor you set so high a value. Unhappy man! behold he is fallen to dust, which is the fate of all mortals; nor can you any longer hope to receive the least succor from him, much less to be protected by him from eternal torments. And know that if you persevere in your crimes, you yourself, by the divine justice, will fall under that punishment, together with the king your friend. As for our parts, we will have no more commerce with you.”

James was strongly affected by reading this letter, and began to reflect with himself what just reproaches his apostacy would deserve at the last day from the mouth of the great Judge. He appeared no more at court, shunned the company of those who would have endeavored to seduce him, and renounced honors, pomp, and pleasures, the fatal lure which had occasioned his ruin. We see every day pretended penitents forget the danger they have just been rescued from; lay their hands again upon the hole of the aspic which stung them before, and unadvisedly put their foot into the snare out of which they had just escaped. The very beasts which have been once taken in a gin, if they have broken it and recovered their liberty, by bare instinct never venture themselves again in that place.  Infinitely more will every man who governs himself by reason or religion, or who sincerely abhors sin above all evils, fly all the approaches of his mortal enemy. This was the disposition of our true penitent; nor did he stick, in the bitterness of his grief for his crime, openly to condemn himself. His words were soon carried to the new king, who immediately sent for him.

The saint boldly confessed himself a Christian. Vararanes, with indignation and fury, reproached him with ingratitude, enumerating the many high favors and honors he had received from his royal father. St. James calmly said, “Where is he at present? What is now become of him?” These words exceedingly exasperated the tyrant, who threatened that his punishment should not be a speedy death, but lingering torments. St. James said, “Any kind of death is no more than a sleep. May my soul die the death of the just.”1 “Death,” said the tyrant, “is not a sleep; it is a terror to lords and kings.” The martyr answered, “It indeed terrifies kings, and all others who contemn God; because the hope of the wicked shall perish.”2 The king took him up at these words, and sharply said, “Do you then call us wicked men, O idle race, who neither worship God, nor the sun, moon, fire, or water, the illustrious offspring of the gods?” “I accuse you not,” replied St. James, “but I say that you give the incommunicable name of God to creatures.”

The king, whose wrath was more and more kindled, called together his ministers and the judges of his empire, in order to deliberate what new cruel death could be invented for the chastisement of so notorious an offender. After a long consultation the council came to a resolution, that, unless the pretended criminal renounced Christ he should be hung on the rack, and his limbs cut off one after another, joint by joint. The sentence was no sooner made public but the whole city flocked to see his uncommon execution, and the Christians, falling prostrate on the ground, poured forth their prayers to God for the martyr’s perseverance, who had been carried out from the court without delay to the place of execution.

When he was arrived there he begged a moment’s respite, and, turning his face towards the east, fell on his knees, and, lifting up his eyes to heaven, prayed with great fervor. After waiting some time the executioners approached the intrepid servant of Christ, and displayed their naked cimeters and other frightful weapons and instruments before his eyes; then they took hold of his hand, and violently stretched out his arm; and in that posture explained to him the cruel death he was just going to suffer, and pressed him to avert so terrible a punishment by obeying the king. His birth, and the high rank which he had held in the empire, the flower of his age, and the comeliness and majesty of his person, moved the whole multitude of spectators to tears at the sight.  The heathens conjured him with the most passionate and moving expressions and gestures to dissemble his religion only for the present time, saying he might immediately return to it again. The martyr answered them, “This death, which appeared to them to wear so dreadful a face, was very little for the purchase of eternal life.” 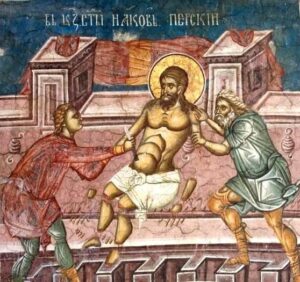 Then, turning to the executioners, he said, “Why stand ye idle looking on? Why begin ye not your work?” They therefore cut off his right thumb. Upon which he prayed thus aloud: “O Saviour of Christians, receive a branch of the tree. It will putrefy, but will bud again, and, as I am assured, will be clothed with glory.” The judge, who had been appointed by the king to oversee the execution, burst into tears at this spectacle, and all the people that were present did the same, and many cried out to the martyr, “It is enough that you have lost thus much for the sake of religion. Suffer not your most tender body thus to be cut piecemeal, and destroyed. You have riches: bestow part of them on the poor for the good of your soul; but die not in this manner.” St. James answered, “The vine dies in winter, yet revives in spring; and shall not the body when cut down sprout up again?”

When his first finger was cut off, he cried out, “My heart hath rejoiced in the Lord; and my soul hath exulted in his salvation.3 Receive, O Lord, another branch.” Here the joy of his heart seemed sensibly to overcome the pain he suffered, and appeared visibly in his countenance. At the lopping off every finger he exulted and thanked God afresh. After the loss of the fingers of his right hand, and again after those of his left, he was conjured by the judges to conform, and save himself. To whom he meekly answered, “He is not worthy of God, who, after putting his hand to the plough, shall look back.” The great toe of his right foot was next cut off, and followed by the rest; then the little toe of the left foot, and all the others after it. At the loss of each part the martyr repeated the praises of God, exulting as at a subject of fresh joy.

When his fingers and toes were lopped off, he cheerfully said to the executioners, “Now the boughs are gone, cut down the trunk. Do not pity me; for my heart hath rejoiced in the Lord, and my soul is lifted up to him who loveth the humble and the little ones.” Then his right foot, after that his left foot: next the right, then he left hand were cut off. The right arm and the left: then the right, and after that the left leg felt the knife. While he lay weltering in his own blood, his thighs were torn from the hips. Lying a naked trunk, and having already lost half his body, he still continued to pray and praise God with cheerfulness, till a guard, by severing his head from his body, completed his martyrdom.

This was executed on the 27th of November, in the year of our Lord 421, the second of king Vararanes. The Christians offered a considerable sum of money for the martyr’s relics, but were not allowed to redeem them. However, they afterwards watched an opportunity, and carried them off by stealth. They found them in twenty-eight different pieces, and put them with the trunk into a chest or urn, together with the congealed blood, and that which had been received in linen cloths. But part of the blood had been sucked up by the sun, and its rays were so strongly dyed therewith as to unge the sacred limbs of the martyr, upon which they darted, with a red color. The author of these acts, who was an eye-witness, adds, “We all, supplaint implored the aid of the blessed James.” The faithful buried his remains in a place unknown to the heathens. The triumph of this illustrious penitent and martyr has, in all succeeding ages, been most renowned in the churches of the Persians, Syrians, Coptes, Greeks, and Latins.  1 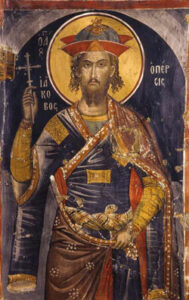