The Speed of Science and Superstition

Many of you have already seen the above 45 second clip where Mr. Roos, a conservative member of the European Parliament, asks a Pfizer representative named Mrs. Small if Pfizer even tested their Covid-19 vaccine on stopping the transmission of the Covid-19 virus before its international rollout.  Mrs. Small replies, “No [laugh]… We had to really move at the speed of science to really understand what is taking place in the market.  And from that point of view, we had to do everything at-risk.”

So, notice that the Dutchman Mr. Roos is not asking about a certain amount of studies.  Rather, he is simply asking if Pfizer did any testing to make sure their Covid-19 vaccine actually stopped the Covid-19 virus before peddling it.  Nope. The answer was a big no, from Mrs. Pfizer, herself, as she laughs.  She laughs at a now admittedly-untested vaccine that made billions and killed thousands (or maybe millions.)  Actually, we’ve known for a long time that the safety of their vaccine has been untested, hence the countless people dying of blood-clots and miscarriages.  But the above video is a new revelation:  Not only does Pfizer harm your heart, but it actually never stopped Covid.  How do we know this?  Because it wasn’t even tested on people with covid-19!  She admits that in the above clip with a laugh, implying they had to take a big pharmacological risk on the little people to make billions of dollars for the big people.

Regarding this international roll-out of an untested injection, Mrs. Small (officially speaking for Pfizer to the European Parliament) said it had to be done “at the speed of science.”  I think she means “at the speed of lucrative population-control poisons being rolled-out before getting caught.”  Really, what exactly is “the speed of science”?  We’ve known for a long time this “speed of science” was to dupe people into the most fatal injection in the history of modern medicine.  But even I thought at one point, “Well, maybe even if the jab kills many people, it may have saved a few.”  Nope.  She basically admits the big-bad Pfizer vaccine was no vaccine at all.  How do we know that?  Because Pfizer didn’t have time to test it on anyone with Covid-19.  Why? Because they were moving at the “speed of science. ” She even adds that they had to do everything “at-risk.”  At risk to whom?  Everyone who took it, many of whom died of it.  So, the vaccine truly did nothing…except kill people.

Why did people believe it?  It’s found again in her three words “speed of science.”  What she really meant is the “speed of superstition.”  Archbishop Fulton Sheen once said, “An age without faith is an age of superstition.  Religious belief is so essential to the heart of man that once it is cast aside, some false form is called to fill the void.  Every epoch of materialism has been followed by an era of superstition in which minds believe everything as fanatics and quacks become shrines of worship and adoration.”

All the Catholics (from laymen to bishops) who called me “crazy” for resisting the covid-19 vaccine, look at how many have already died of the vaccine:  My friend who is a clinician on the East Coast told me this week that she believes more have now died of the vaccine than covid itself.  It seems to me that the bishops who put up public pictures of themselves getting the jab two years ago were nothing more than lackeys of government, flunkies for the witch-doctors at Pfizer.  As I said on a video nearly two years ago, the US bishops have no indemnity against pharmacological malpractice lawsuits. If you lost someone due to their coercion, I wish you could sue them but right now it wouldn’t do anything.

Nevertheless, since no member of the clergy (especially one with no medical training) had any right to tell you that a completely experimental injection was “an act of love,” I hope you keep them accountable if one of your loved ones died of the vaccine at the coercion of your local clergy.

Why did the bishops and priests of the US and Europe push the vaccine?  I don’t see how you could have done that if you had any adherence to true religion or true science.   The Catholic hierarchy (from the Vatican downwards) who pushed the DeathVax to lay Catholics now seem to me to be the “fanatics and quacks,” bowing before an injection-site as a “shrine of worship” found only in “an age of superstition.” Such quacks lightly took jobs in the highest echelons of the Catholic Church, thinking it would be easy, that their judgment might be easy, “since probably nearly everyone goes to heaven.”  No, we should not be surprised that a diabolical injection supported by not only no supernatural faith, but even no science would kill so many, and help so few. 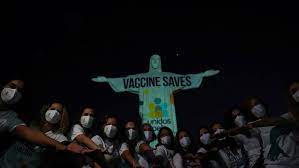 A blasphemy of true salvation, found upon the ‘Christ the Redeemer’ statue in Rio, 2021. 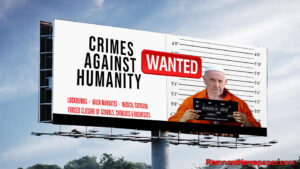 Roadside billboard in the USA produced by ‘The Remnant’ periodical, 2022.