We Need to Change Our Strategy with Infiltrators 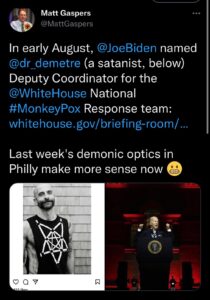 When I saw this tweet by Matt Gaspers, I realized we were being trolled by the left. Or, Satan was openly trolling the left and still all leftists don’t realize they are now fully under the grip of who St. Ignatius calls “the enemy of human nature.”  Either way, there are currently no attempts by the left anymore to hide their evil intentions or actions. Aleksandr Solzhenitsyn wrote: “We know that they are lying. They know that they are lying. They even know that we know they are lying. We also know that they know we know they are lying. But they still continue to lie.”  That’s because the big-time leftists get “a high” not so much by lying to us, but by getting away with it.  That is very thrilling for them, especially since most good people on the right (in both Church and State) put their tail between their legs as they try to reach across the aisle to meet the left halfway: 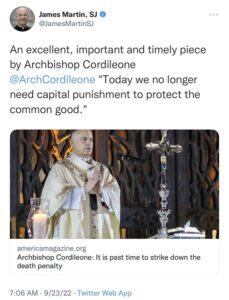 Fr. Frederick Faber gave a strangely prophetic sermon on Pentecost 1861 in the London Oratory, including these words:  “We must remember that if all the manifestly good men were on one side and all the manifestly bad men were on the other, there would be no danger of anyone, least of all the elect, being deceived by lying wonders.  It is the good men, once good, we must hope good still, who are to do the work of anti-christ and so sadly to crucify the Lord afresh… Bear in mind this feature of the last days, that this deceitfulness arises from good men being on the wrong side.” 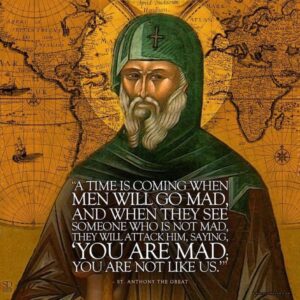 KGB-defector Yuri Bezmenov once gave this advice to America in the 1980s to help us preempt the coming brainwashing of communism: “Educate yourself [and] understand what’s going on around you. You are not living at [a] time of peace. You are in a state of war and you have precious little time to save yourself… especially if you are talking about [the] young generation.”  Notice he did not say that we must try to change the left.  He considered them “too far gone” (so to speak.)  Bezmenov said “They are programmed to think and react to certain stimuli in a certain pattern… You can not change their mind even if you expose them to authentic information. Even if you prove that white is white and black is black, you still can not change the basic perception and the logic of behavior.”

Recently a friend told me about her family’s several-day family reunion. On the first day her far-left sister wore something extremely outrageous to the beach, hoping to get a rise out of people. When everyone in the family ignored her, she went back to her relatively-normal clothes in the next day. Perhaps she should have preached to her at that moment, but she judged her sister too “far gone” (so to speak) at that point for a pious lesson on modesty. Ignoring her sister made her put on decent clothes, at least for the weekend.

Ignoring the left when they want to get a rise out of us is only one part of the strategy when we want to win a war for souls.  We also have to see that our greatest weapon is the cross. When the bad guys increase the crosses of the good guys, there is a hidden victory in that for the good guys.  For example, when a priest-friend of mine had his Church vandalized by pro-aborts, he had the attitude of the Triumph of the Cross that I saw early Roman Christians when he texted me: “Just like in the Acts of the Apostles: when they spoke the Truth the people ground their teeth and stopped their ears. They then acted out in violence on the disciples, but the disciple rejoiced and continued the mission our Lord gave them. Over the 2000 years it is still the same. We will continue the mission of Christ, bringing the Truth to the world despite the violence.”

That is truly the right attitude, since the left wants us to know they’re destroying Church and State. So, even though we have to fight hard spiritually and intellectually for Church and State, I am at the point that I now believe we need to stop acting so outraged on social media just to get “likes.”  The left isn’t even pretending to be good anymore if they are publicly fighting to chemically mutilate children.   Protect your family and then in education and self-defense, hold the line on no-compromise.  Offer up redemptive suffering for the rapid Triumph of the Immaculate Heart of Mary (which I believe will happen in the next decade.)  And maybe attempt to educate the USA on politics, too, but she’s probably too far gone for a renewal if half our nation’s populations wants to see us embarrass ourselves on an international stage. 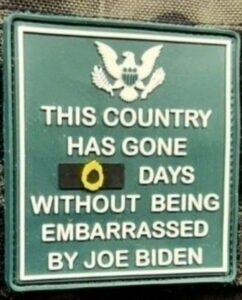 We also must delineate between the left and their victims. For example, transgender children are not our enemies. Those children are deceived. Lonely teens are frequently groomed by high-level predators who may appear innocent or even silly.  You must realize that kids tempted to go “trans” have one common enemy: Predatory pediatricians, education officials and child psychiatrists who are frequently making millions on mutilating surgeries and chemical treatments of confused children. Yes, the leftists need us to evangelize them with the good news of Jesus Christ and His Church, but let’s stop meeting them “halfway across the aisle.” They aren’t going to listen, so please fight to save the children of this country,

-You can follow me on Telegram by clicking “join” on that channel.
-Thank you to everyone who can Donate to my life and ministry. My entire income (except health insurance from my diocese) comes from you, my readers and listeners.