Above top left is my friend, Msgr. Philip J. Reilly, a priest of the diocese of Brooklyn who has saved tens of thousands of babies from abortion.  Above top right is a man who he helped convert, Dr. Bernard Nathanson MD who killed 75,000 babies before being baptized a Catholic.  The good news of the blog post will eventually get to these two men. 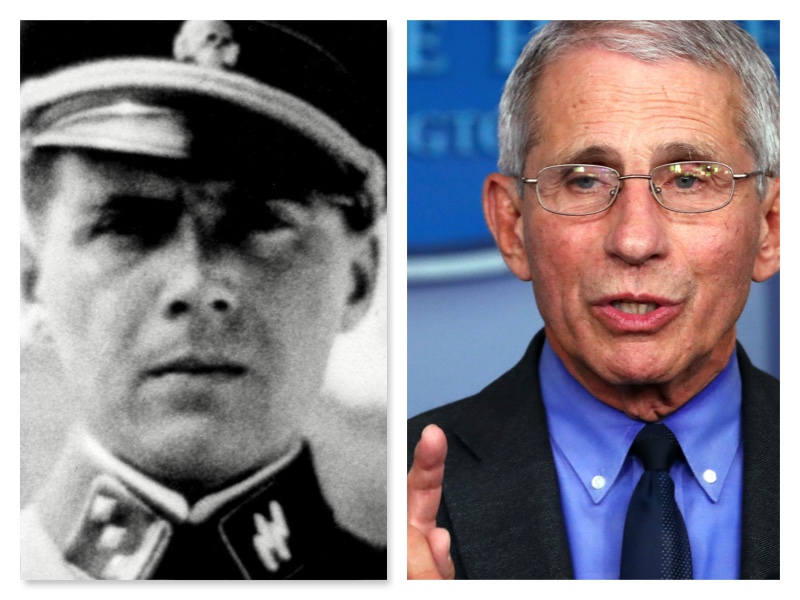 But first, I want to admit that I was going to write a blog post on these two men.  The top left (second set of pictures) is Nazi doctor, Josef Mengele. Wikipedia says of him that he was “known as the Angel of Death (German: Todesengel), and he was a German Schutzstaffel (SS) officer and physician during World War II. He is mainly remembered for his actions at the Auschwitz concentration camp, where he performed deadly experiments on prisoners, and was a member of the team of doctors who selected victims to be killed in the gas chambers and was one of the doctors who administered the gas.”  Later in that article, even Wikipedia admits that “files released by the Argentine government in 1992 indicate that Mengele may have practiced medicine without a license while living in Buenos Aires, including performing abortions.”

The top right (second set of pictures) is obviously Dr. Anthony Fauci.  I was going to write a blog post comparing Fauci to Dr. Josef Mengele.  One source (that I will not link here, due to immodest ads) writes tellingly of his obsession with death: “During the AIDS epidemic in the 1980s, Dr. Anthony Fauci discouraged and prevented inexpensive treatments for AIDS and focused exclusively on AZT. He’s doing the same thing today with COVID, focusing on highly profitable vaccines and ignoring potentially safe and effective treatments.”  Furthermore, Fauci (like Mengele) is viciously pro-abortion as seen here and here.  Finally, notice the lack of compassion in both men:

JUST IN – Fauci’s NIH division partly funded a lab to drug dogs and "lock their heads in cages filled with hungry sandflies so that the insects could eat them alive."https://t.co/TuujeCjb3M

The above is my bad news on those men in the second set of pictures.  The below is my good news that refers to the two men at the first set of pictures, namely, Msgr. Philip J. Reilly and Dr. Bernard Nathanson MD, both of NYC.

Msgr. Reilly (once a very handsome young man, but now a very beautiful old man in the Lord’s eyes due to years of offering up facial cancer for the unborn—including numerous surgeries that happened accidentally without anesthesia) has counseled for decades in front of a Brooklyn abortion center that took 500,000 lives before closing.  But Msgr. Reilly rescued many of those would-be victims before death.  In the pro-life world, he trained “the whole world” (as the owner of the abortion center in Brooklyn once complained.)   I was one of those people who he trained in the ways of Helpers of God’s Precious Infants.  So was my friend, Liz.

But my friend Liz was more than a trainee.  She was his assistant for years.  Last week on the phone she told me that Msgr. Reilly was very angry at one point about how many babies Dr. Bernard Nathanson had killed (75,000.)  But, then one day before the Blessed Sacrament in the 1980s, Msgr. Reilly changed his tactic to start praying for Dr. Bernard Nathanson instead of being angry at him.  Sure enough, a saint’s prayers converted a big-time sinner into a great penitent.  Dr. Bernard Nathanson MD (a Jew) was then baptized a Catholic Christian in NYC.  Remember that baptism gets rid of Purgatory time.  Oh, the mercies of God that a man who killed 75,000 kids would not have to do Purgatory for those sins!

To be honest, when Liz told me this, I felt I should probably research this fact if it was going to go into a blog post.  Sure enough, I found the same account at the website of Chicago’s Pro-Life Action League that reads:

Monsignor spoke in particular about his relationship with the recently deceased Dr. Bernard Nathanson, admitting that he at one time considered Nathanson his enemy, but that he came to realize that God never stopped loving Nathanson and wanting him to amend his ways, even after he committed all of the thousands of abortions he was responsible for. Later, Msgr. Reilly realized he must be Christlike and love those opposed to us without preconditions — and so too must all of us.

So, that is how we become the great ones conquering in love over the would-be “great-ones” of the earth like Fauci and Gates:  We pray for them.  I admit that I have just as much a distaste for praying for global genocidal megalomaniacs like Fauci and Gates.  But here we have the proof above from the saintly witness of Msgr. Philip Reilly that such prayers may in fact be heard by God Almighty for the conversion of even great killers.  Remember that the Virgin of Revelation told Bruno in the 20th century (in the Vatican-approved apparition) the following: It is love that wins everything.  Do penance on every occasion that is presented to you. It is a request of love.  The penance He asks you is to love your neighbor and give a good example through your life.