Ramping Up for a Global Scapegoating

A Bloomberg article titled Previous Covid Prevents Delta Infection Better Than Pfizer Shot reads, “People given both doses of the Pfizer-BioNTech vaccine were almost six-fold more likely to contract a delta infection and seven-fold more likely to have symptomatic disease than those who recovered.”  Mercury News also reports that a team at UCSF “found that 78% of infections in fully vaccinated people among the study were caused by variants with these mutations, compared to 48% of the cases among unvaccinated people, who remained an easier target for earlier generations of the virus. Overall, the proportion of cases linked to these variants more than doubled between February and June” of 2021.

This tenured Navy surgeon also explains here that the vaccine is killing our US Military members more than covid:

This lines up with what I am finding among my friends with boots-on-the-ground.  Late last week (Aug 2021) I texted a fire-medic buddy of mine the following:  “What percentage of those on a ventilator due to covid would you suspect were fully vaxxed right now?”  He texted me back, “90%.”  (He and I both fully realize that this is the complete and total opposite narrative of what the mainstream media and even the hospitals are reporting.)  He then texted me:  “The ER’s aren’t testing people for Covid if they have had the jab. They are only testing the unvaxxed.”

It also turns out that “fully vaccinated” doesn’t last long as the official definition on the website of the City of St. Louis reveals: 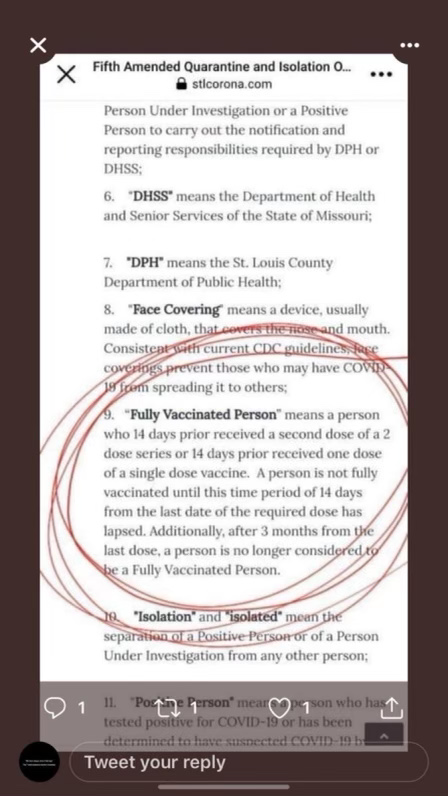 What is the motivation for all of this?  I have another friend whose family runs a pizza parlor in NY and he texted me the following, out of the blue.  Keep in mind as you read his text (and he and the fire-medic above gave me permission to publish) that his family comes from Italy:

“Hi father, just wanted to share this. My mom talked to her brother in Italy today. He gave her the whole talk about getting jabbed. My parents think like both of us. Most of the people in in my town and Italy are all jabbed. Then he told her a family member and a friend who are jabbed both got sick. According to him you can still get sick but you won’t die, and it’s the un-jabbed fault. The brainwashing is the same there, if not more. I’m not an expert on end times things and I don’t know if it will happen in our lives, but this worldwide obedience, and mandatory shot seems like they’re paving the way for the anti Christ.”

Finally, remember that this is a real project in Australia:

Notice that the woman tweeting the above story as “breaking” is masked, so she is not ashamed of the news story.  Australia is quite proud of this.  But don’t think for a minute, “That is Australia; this is the United States.”  Even a cursory look on American social media will quickly reveal many masked-jabbers clambering the unjabbed to lose all rights.  They constantly write on social media, Let ’em die.  Umm….Kristallnacht, anyone?

What do you do about it?

First, protect your families and then remember:

For He knoweth the secrets of the heart. Because for Thy sake we are killed all the day long. We are counted as sheep for the slaughter.—PS 43:22 DRB

For the eyes of the Lord behold all the earth, and give strength to those who—with a perfect heart—trust in Him.—2 Chr 16:9.