Another Good Priest Threatened with the Funny-Farm

ACI Prensa, the Spanish sister news agency of CNA, confirmed that the Diocese of Alajuela, in the Northern region of Costa Rica, ordered Fr. Sixto Eduardo Varela Santamaría to be suspended from all ministries for six months, and will be sent to a psychological treatment clinic for celebrating in Latin the Mass of the Missal of Pope Paul VI, also known as the Ordinary Form or “Novus Ordo.”  In a statement issued on behalf of the Bishop of Alajuela, Bartolomé Buigues Oller, Fr. Luis Hernández Solís, director of communications, explained that Fr. Varela Santamaría was “admonished two previous times” for celebrating one Mass in Latin at his parish of St. Joseph the Patriarch.  According to the statement, his removal from the parish and the suspension of his priestly activities “are expected to be measures that will restore the ecclesial communion and the priest’s well-being; for this, we ask all to unite in fervent prayer.”

Although I want to ultimately discuss an attack on many priests’ mental well-being in this blog, we must briefly look at the liturgical issues raised in the article quoted above to get to the point of manipulative psychology.  First of all, notice that Fr. Santamaría is being punished for offering a reverent Novus Ordo (NO) not for offering the Traditional Latin Mass (TLM.)  His bishop, Bishop Oller, must not know that the original Missal of the Mass of Pope Paul VI has in its Latin version the command that the priest “turn around” to say Dominus Vobiscum.  In other words, the Novus Ordo can and should be offered to God ad orientem.  (And keep in mind as you read this blog, I am no apologist for a “reverent Novus Ordo” being the end-game of liturgical reform.)

Secondly, his bishop is wrong to prohibit the new Mass being offered in Latin since the document Vatican document Redemptionis Sacramentum released under Pope John Paul II released in 2004 reads:  “Mass is celebrated either in Latin or in another language, provided that liturgical texts are used which have been approved according to the norm of law. Except in the case of celebrations of the Mass that are scheduled by the ecclesiastical authorities to take place in the language of the people, Priests are always and everywhere permitted to celebrate Mass in Latin.”—Redemptionis Sacramentum #112.  (Again, keep in mind that document is referring to the Novus Ordo, not the Traditional Latin Mass.)

So, why is Fr. Santamaría being punished for doing the new Mass in Latin facing away from the people?

The first reason given by the spokesman priest of the diocese is “to restore ecclesial communion” as if a few Masses by a lone priest threw the entire diocese into a maddening disarray of confusion, sadness and heresy.  But, seriously, we must ask:  Ecclesial communion with whom was restored?  The pre-Vatican II Church that only allowed the Traditional Latin Mass?  The post-Vatican II Church that allows the new Mass in Latin facing away from the people as proven above?  The diocese is not clear.  They only say “he has been admonished two previous times” for doing what Vatican II tells him to do.  Their second reason gets to the heart of the issue.  Catholic News Agency above reported that Fr. Santamaría “will be sent to a psychological treatment clinic for celebrating in Latin the Mass of the Missal of Pope Paul VI.”  Fr. Luis Hernández Solís, director of communications for the Alajuela diocese in north Costa Rica said the goal of this psyche-unit would be “the priest’s well-being.”

I have noticed that all kinds of people (including traditional Catholics) are mis-using the term “gaslighting” these days.  Let’s look at the correct definition.  Psychology Today accurately defines gaslighting as “an insidious form of manipulation and psychological control [where] victims… are deliberately and systematically fed false information that leads them to question what they know to be true, often about themselves.” Gaslight comes from a 1938 play called Gas Light and later the Ingrid Bergman 1944 film Gaslight where she is made to feel crazy by her new husband.

And this is exactly what is happening to Fr. Santamaría by his bishop.  This is true gaslighting, especially considering the fact that spokesman for the diocese said that he would have to go to a psychological treatment clinic and that this would be for “the priest’s well being.”  Now, I don’t think Fr. Santamaría would be very happy that I’m writing this article because later in the CNA article he says, “I am aware that I can start a canonical process, or that I could appeal, I know there are many (legal) options … but I will do none of that.  I love the Church.”

Fr. Santamaría ostensibly believes that defending his priesthood against a hierarchy that wants to destroy him is tantamount to overturning his love of the Church.  I wish he had read the blog post I wrote earlier this year called Should a Young Traditionalist Submarine Through Normal Seminary? where I wrote:  “Just the past month, I have spoken on the phone to two priests in different parts of the US who got sent to different psyche-wards after ordination for being too traditional. There in the monkeyhouse, they either break you or make it impossible to re-enter active ministry with a clean bill of mental health.  It’s totally a decision ad libitum of your own bishop.  In fact, one traditional priest told me recently how he was not allowed to go back to active ministry, but another priest in his own psyche-ward was being treated for having a homosexual relationship with another priest…and was still invited back to active ministry.”

In all transparency, my blog linked above was purposefully written as a rebuttal to a Fr. Z article where he says the young trad seminarian should submarine through seminary just to get ordained.  Fr. Z has a bit of a “infiltrate the infiltration” strategy.  I still think he is wrong on that.  But now I want to greatly compliment Fr. Z on two excellent articles that he wrote about what happens to young traditionalists (and even non-traditional conservative) seminarians who end up in the hands of modernist bishops, and what happens to their minds as they go through these kangaroo courts.  The first of Fr. Z’s posts is called Soviet style “psych” tactics used against priests by bishops.  In that, he writes very accurately about what has happened to many good priests in the United States:

The pattern is alarmingly similar. The priest has some sort of dust up in the parish (or wherever). For example, a woman gets angry because he preached about contraception, someone claims that he has “boundary issues”, somebody on the staff says that he is “cold” or “remote”. They complain to the bishop. The bishop tells the priest – pressures the priest – to go for “evaluation”. With great trepidation the priest obeys (an important point). He goes for a week or two of evaluation, at the end of which he is told that there isn’t much wrong with him. He goes home, thinking that all is well. Shortly thereafter, he is called in to the bishop’s office, where he is told that the clinic sent the bishop a very different assessment. The priest is diagnosed – and it is always about the same – narcissism and borderline bi-polar. The bishop then really puts the screws to the man to go back that clinic for “treatment”. He is told for three months or so. But when he gets there, and they confiscate his mobile phone and even his shaving kit, and start pumping him full of drugs and monitoring/controlling email, he is told that he’ll be there for six months. The horror show begins.

Fr. Z is not exaggerating.  This year alone I have spoken to two good priests who were sent to the funny-farm.  Fr. Z later had a blog called Moral Injury, traditional Catholics and burnt out priests.  The beginning of the blog begins with a physician who wrote Fr. Z about a term that was new to me, moral injury:

I am a physician and have had the opportunity to work with several burnt out priests over the years. I am concerned about the emotional well being of priests during the current situation because of a stressor being called moral injury.  This injury comes from a situation when a person can not take an action that he feels to be morally right, or is forced to do something morally wrong, by the order of a superior. I am concerned that priests are experiencing this as there bishops have prohibited the sacraments.

In many cases tradition-inclined priests have been treated savagely by their bishops and other priests. Traditional Catholic have been too. They have been for years, even for decades, prevented by authority (usually through bullying) from doing what their consciences tell them is the right thing to do. They are forced, year in and year out, to do what they think is, if not outright wrong, at least inferior to what could be done with a little leeway and compassion. They are in a perpetual bind.

Fr. Santamaría says he is going to refrain from getting a canon lawyer because he loves the Church too much.  But he has made the rookie mistake of conflating the hierarchy with the Church.  No, I’m not doubting the bishops are validly ordained with valid seats in their dioceses.  I am simply saying that modernist bishops do not have in mind the good of even mildly-traditional priests who still believe in the hermeneutic of continuity (like Fr. Santamaría) much less traditionalists who do not believe in the hermeneutic of continuity (like my friends.)  They want to break our consciences.  Fr. Santamaría probably does not yet realize that his bishop’s decision to send him to the Funny-Farm has nothing to do with his mental health or even liturgical practices.  It is to break him and to shame him for daring to be a Catholic.  Yes, a Catholic.  (If you doubt this, re-read the first half of this blog proving that Fr. Santamaría is being punished by his diocese for following post-Vatican II documents on the liturgy.)  Should he obey the command to go to the monkeyhouse, they will find a reason he can never return to active ministry.  Should he disobey, he will be permanently suspended for “disobedience.”  There is no way out for a traditional priest to maintain both his conscience and his ministry in a diocese run by modernists.  Thinking otherwise is as silly as an Athanasian priest thinking he will be given quarter by an Arian bishop. 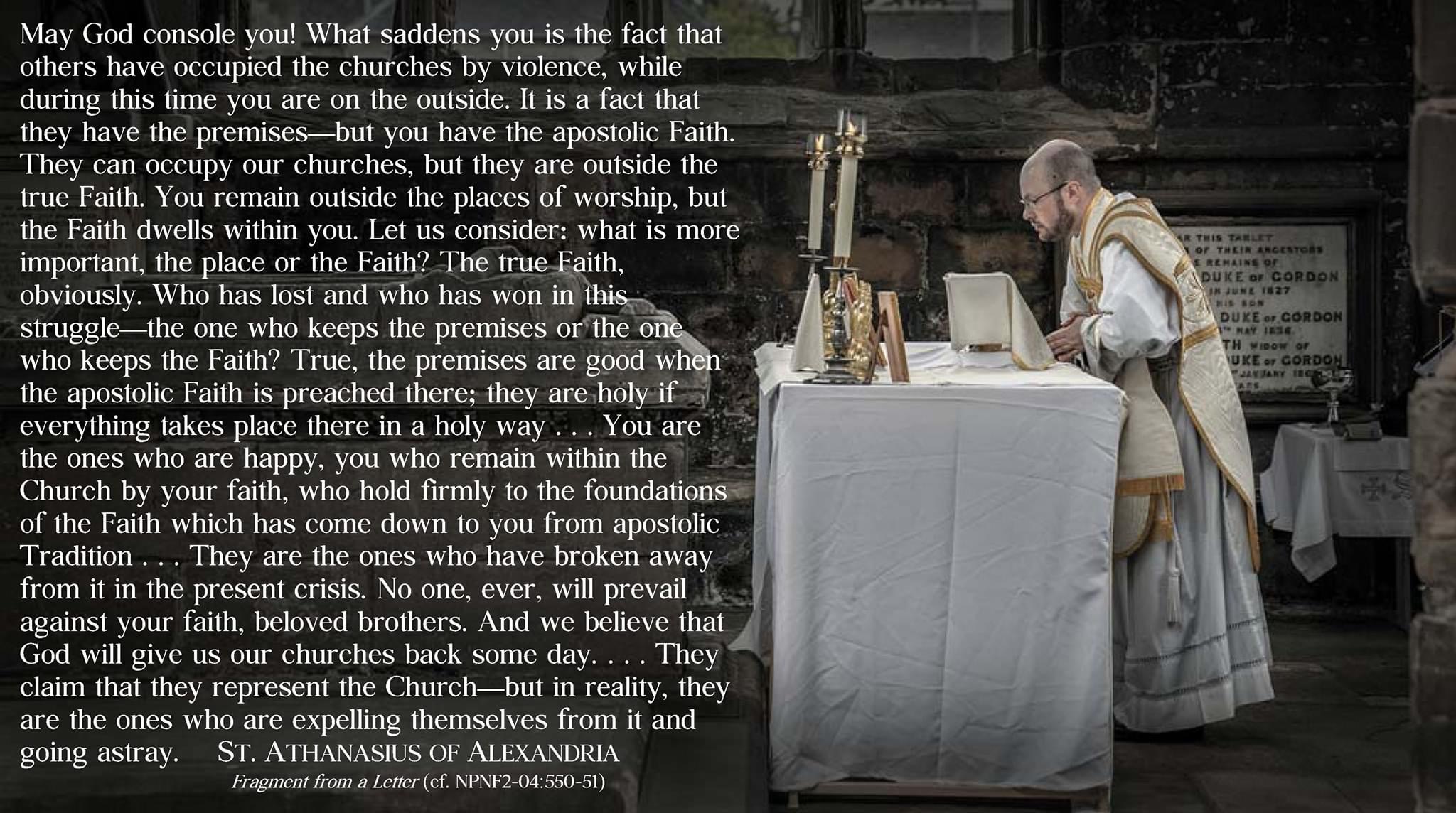