How Humble Are Traditionalists?

The Apostle Paul is writing here that what he delivered over to the early Christians is exactly what he first received (tradidi enim vobis in primis quod et accepi.) And this tradition was not just “small-t tradition,” but “Big-T Tradition.”  In other words, St. Paul delivered over Divine Revelation to others just as it was given to him by Christ Himself.  The verb “hand over” or “deliver” (Greek Παρέδωκα and Latin tradidi) there in 1 Cor 15:3 is in the past perfect conjugation.  Strangely, it is the same verb used when Judas sought how he might deliver Christ to the Pharisees in Luke 22:4 but in the subjunctive tense (Greek παραδῷ and Latin traderet.) But in both St. Paul and St. Luke, one can very much picture a delivering of Christ to another, though obviously the former delivering of Christ’s doctrine was good for St. Paul whereas in St. Luke the delivering of Jesus to the Pharisees was bad for Judas.

On Sunday, I offered my own low Mass in my hermitage, but sometimes I also attend a Missa Cantata.  Besides all the joy I find in both parishes I attend, a few things struck me during last Sunday’s Mass:

Our way of worship in the Traditional Latin Mass includes nothing creative, except exactly what had been delivered to us from our forefathers.  And it was stunningly beautiful.  The Gregorian Chant I heard could be traced to the 6th century.   The sermon was mostly quoting a 16th century saint (St. Francis De Sales.). The integrity of the sacrifice by the celebrant was divine.  But none of the priests there and none of the choir or schola members (I still don’t understand the difference) could claim credit for this heavenly experience at one of the most divine Masses I have ever attended.

It was all handed down.  It was all delivered.  None of it was the fruit of the individual “creativity” of that parish.

What does this have to do with the title of this blog, How Humble Are Traditionalists?

I understand certain Catholics ascribe stylistic demerits to traditional Catholics for being “arrogant” or “mean” about the ancient faith to which they adhere.  I understand why normy Catholics think traditional Catholics are “majoring in the minors” in things like head coverings when people don’t know the basics of the catechism.  But the fact is, stylistic points aside, it seems traditional Catholics have the most merit for humility for the simple reason that  they have chosen a religion that was not invented in the 1960s.  They have accepted what was delivered to them in humility in matters of faith, morals and doctrine.  And this leads to simplicity and joy (two virtues I’m seeing more and more of in the traditional movement.)

But even without that point on virtue, I would still assert that traditionalists are the most humble before Divine Revelation.  The fact is that you can not be humble if you stick with a new religion formed in the 1960s.  Why?  For one, because it becomes a creativity competition with no roots.   There will always have to be a creative spin on the modernistic faith.   Even if one were to say “But what about all the creative modern Popes?” our easy response is: “I’ll take the preponderance of evidence of how 250+ Popes promoted the Traditional Latin Mass and St. Thomas Aquinas as it was delivered over to them.”  You see, we do fall in line with the Popes as traditionalists.  All Catholics just have to consider the preponderance of evidence of not only the Church Militant, but also the Church Triumphant.

What hit me at that Sung Mass was also how Marian it is to stick with tradition.  Mary was the greatest saint because she was simply the prism of God:  God’s white light hit her and the rainbow of glory was seen on earth, primarily in her Son, God-Incarnate.  Mary was the pure prism distorting nothing shining through her.  The Blessed Trinity could be seen perfectly through her precisly because she claimed no “creativity” (despite ironically being the most creative of all saints!)  And this is a connection I meditated upon at Mass:  The Traditional Latin Mass is like Mary because neither claim any creativity.  Both shine forth humbly what was perfectly delivered to each one

Traditionalists (aka Apostolic Catholics) are the most humble of Catholics because they don’t change the faith that was delivered over to them.  Ironically, this produces the most creative saints and sermons. 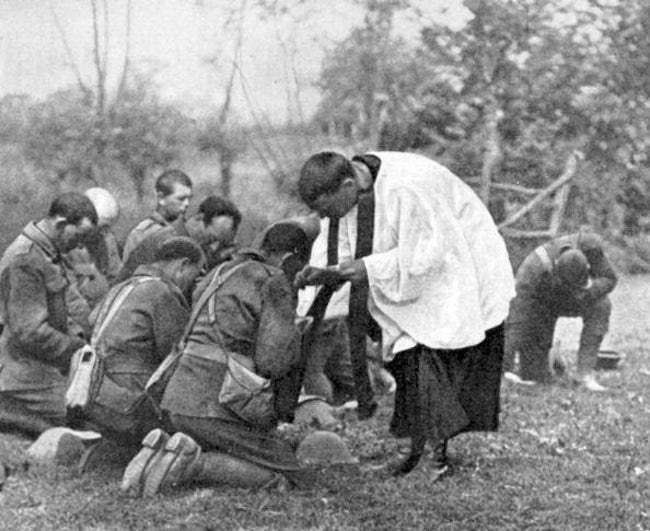 Connected to the life of Immaculate Virgin Mary is the fact that her friends, St. Peter and St. Paul, chose to stay humble before the doctrine and liturgy that God-Himself gave to them.  To stay humble before God is first to do no modifications on His Word.   Even though the saints were the most creative people who ever lived, there is something about the saints where they truly claim no creativity at all and are simply perfect prisms of God’s light and life.  Why?  Because they are knew they are dealing with Divine Revelation before human emotions.  Because purity of life is greatly linked to this, St. Paul was able to write in humility and boldness the importance of inventing no new Gospel (or presumably no new liturgy) from what was delivered from the start:

But even if we or an angel from heaven should preach to you a gospel contrary to the one we preached to you, let him be accursed.—Gal 1:8 ESV. 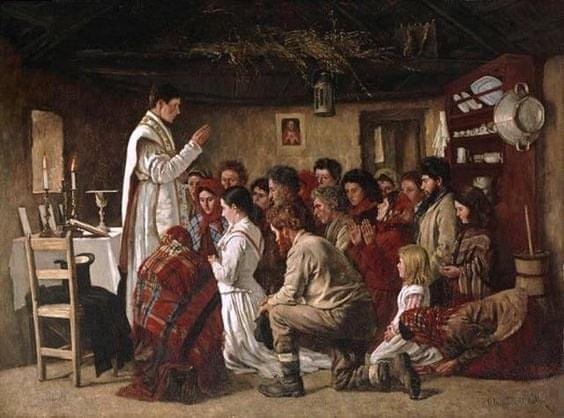 The end of Mass in Ireland.