Should a Young Traditionalist Submarine Through Normal Seminary?

Should a young man who is a traditional Catholic “submarine” himself into his own diocese so as to get ordained?  First, what does this question even mean?  This means:  “Should the young man who prefers the tradition of the Catholic Church join a Traditional Latin Mass (TLM) congregation -or- should he could join his home diocese by keeping his head down in a normie seminary so as to be ordained so that he can reach the average Catholic with the Gospel even if this means he must offer the new Mass in English (or Vietnamese or Spanish or French)?

My answer is,  “No, a young traditionalist should not ‘submarine’ through seminary so as to get ordained for a normal diocese.”  Before you stop reading because you think you know the answer (as either my friend or my enemy) let me write:  This is not a rascally blog post to make the average US Catholic bishop mad.  The average US Catholic bishop will ironically agree with the conclusion of this blog, even he does not agree with the means.  Furthermore, I understand the young man’s arguments that he doesn’t want to abandon the average Catholic just to serve the pious traditionalists.

There’s a few reasons he should avoid the normie seminary…
1) Upon ordination the young-trad over the next five years will either:
a) Compromise his conscience on doctrine and/or liturgy. I suspect 80% of the traditionalists ordained for normal dioceses compromise their conscience on doctrine or liturgy within the first three years.  1
or
b) Get sent to the funny-farm.  Just the past month, I have spoken on the phone to two priests in different parts of the US who got sent to different psyche-wards after ordination for being too traditional. There in the monkeyhouse, they either break you or make it impossible to re-enter active ministry with a clean bill of mental health.  It’s totally a decision ad libitum of your own bishop.  In fact, one traditional priest told me recently how he was not allowed to go back to active ministry, but another priest in his own psyche-ward was being treated for having a homosexual relationship with another priest…and was still invited back to active ministry.
or
c) Get exiled or suspended. The first step for the priest dubbed “too rigorous” is to transfer him to a parish in the backwater boonies of his own home diocese.  If this and the re-education camp doesn’t work (see b above) then he is frequently suspended.  Of course, they hang him on a red-herring like, “Not pastoral enough to be in ministry.” (No, I’m not talking about myself on this issue because I never made it to the funny-farm or got suspended. But it is astonishing how many priests have the same story who were simply “too traditional.”  There are a few traditional priests who are predators, but the majority who go through this are innocent.)

Here’s where the average bishop in the USCCB is ironically going to agree with me:  It is dishonest to your bishop to pretend like you are someone you are not. If you are entering seminary with the intention of only doing the Latin Mass and quoting St. Thomas Aquinas and you just plan to “play the game” through seminary to “beat the system” and get ordained, besides the fact you’ll compromise your conscience -or- get exiled, you also have to consider the fact that pretending you are someone you are not for six years in seminary is not only tantamount to dishonesty but it is also tantamount to a double-life.

Is that the type of priests we want?  Priests willing to live a double-life?  No, for even the “conservative” and “progressive” bishops of the USCCB would agree with me on this one point: We do not need seminarians going through seminary as dishonest men, playing their bishop, just to get ordained for having lived a double-life for six years. 2

All in all, my message to young traditional men who prefer the TLM but want to enter their home diocese so as to change it a few years down the road is this: Don’t do it. You’ll get hurt, hurt others’ feelings, compromise yourself or get sent to the monkey-house.  Furthermore, I can almost guarantee you that your own hometown bishop does not want a young man who will not say the new Mass—or even the young man who admits the old Mass is better than the new Mass.  Remember:  Everything eventually comes out in the laundry, especially your true beliefs.  Submarining is dishonest, and you’ll eventually get caught as a traditionalist.  It’s arrogant to think you’ll change a whole diocese by your orthodoxy.  Satan’s main sin was spiritual arrogance.

So, if you want to hand on Apostolic Catholicism and offer to God the TLM and preach heavily with St. Thomas Aquinas from the pulpit, you are better off going to a Latin Mass seminary run by one of the three or so world-wide congregations of TLM priests and brothers.  Or be a single-celibate or brother where you can dedicate your life to prayer, not politics. That is your most honest way out of a submarining plan that will destroy your mind and your future priesthood…Christ’s priesthood, I should say, as Only Jesus Christ is the One, True High Priest. 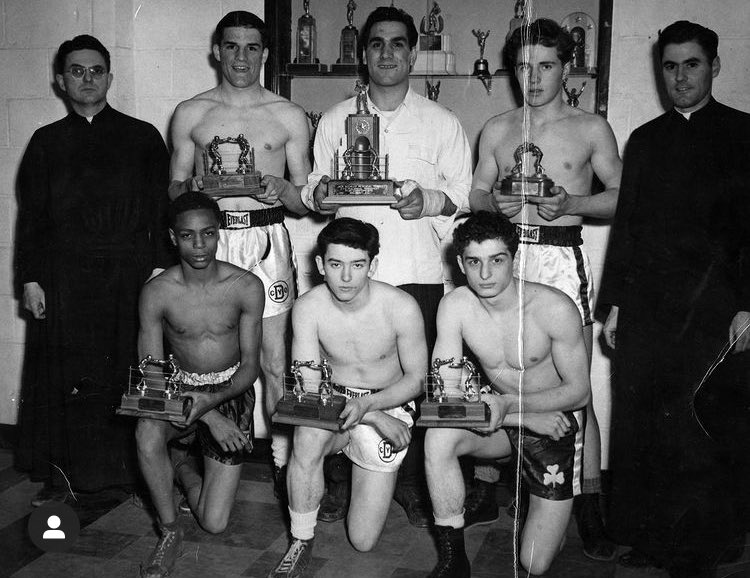 Most people do not know that priests used to teach young men how to box in the ring. This worked for a few reasons, two of which are named here: 1) Priests knew how to fight and 2) They were not attracted to young men dressed like this, unlike fmr-Cdl. McCarrick and many of the clergy of his day.  p/c Adrian F. on Twitter