The Denial of Christ Come in the Flesh

The above is the Vatican’s official advertisement for their May 2021 Health Conference.  It is clearly a mockery of the Creazione di Adamo painted in the Sistine Chapel of the Vatican around 1510 by Michelangelo.  Archbishop Viganò recently wrote that the hands of God and Adam being covered by latex gloves show “the regulations of the new ‘health liturgy'” and imply “that even the Lord Himself might spread the virus.”

Archbishop Viganò also wrote in the above link:  “At La Salette, Our Lady warned us: ‘Rome will lose the Faith and become the seat of the Antichrist.’ It will not be the Holy Church, indefectible by the promises of Christ, that will lose the Faith: it will be the sect that occupies the See of Most Blessed Peter and which today we see propagating the anti-gospel of the New World Order.”

The final “big” antichrist is even alluded to in the new catechism: “Before Christ’s second coming the Church must pass through a final trial that will shake the faith of many believers. The persecution that accompanies her pilgrimage on earth will unveil the ‘mystery of iniquity’ in the form of a religious deception offering men an apparent solution to their problems at the price of apostasy from the truth. The supreme religious deception is that of the Antichrist, a pseudo-messianism by which man glorifies himself in place of God and of his Messiah come in the flesh.”—CCC 675

We know that the theology of every antichrist (big and small) is found in the denial of the coming of Jesus Christ in the flesh:

Beloved, do not believe every spirit, but test the spirits to see whether they are from God, for many false prophets have gone out into the world. By this you know the Spirit of God: every spirit that confesses that Jesus Christ has come in the flesh is from God, and every spirit that does not confess Jesus is not from God. This is the spirit of the antichrist, which you heard was coming and now is in the world already. Little children, you are from God and have overcome them, for he who is in you is greater than he who is in the world.—1 John 4:1-4

For many deceivers have gone out into the world, those who do not confess the coming of Jesus Christ in the flesh. Such a one is the deceiver and the antichrist.—2 John 1:7 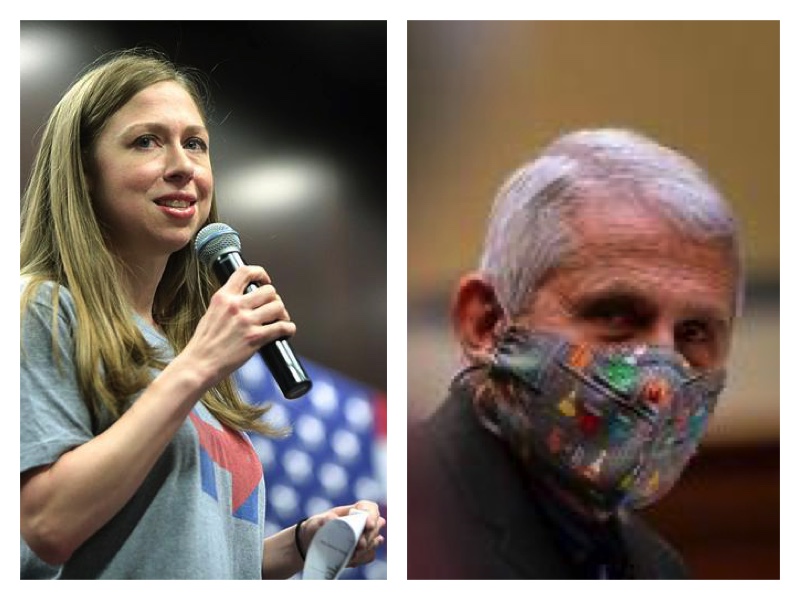 Clinton and Fauci are both pro-abortion Americans who were invited by the Vatican to speak at their May 2021 Health Conference. p/c National Catholic Register.

Again, I have no idea what the final antichrist will look like.  But the notion that the hand of God and Adam would need latex between them to communicate with each other is an obvious denial of Christ’s gift of divinization in the flesh.   Furthermore, the Vatican having two Americans who promote the  systematic slaughter of children in the womb is also a denial of Christ come in the flesh.

A denial of the incarnation does not have to be explicit.  Indeed, after two world wars, we must not expect the false-prophet and the final antichrist (or any “build-up” antichrists) to be screamers like Hitler.  No, I expect the only way to deceive a war-weary humanity after all the violence of the 20th and 21st century would be people who seem very diplomatic, à la the AntiChrist by Soloviev.

In any case, we should watch closely at what Archbishop Viganò above calls “the regulations of the new ‘health liturgy'” implying “even the Lord Himself might spread the virus.” Even more certain is that some denial of Christ come in the flesh is found in pro-baby-slaughter Americans like Chelsea Clinton and Tony Fauci promoting the culture of death at the invitation of the Vatican itself.