Scapular Enrollment: The Best Gift You Can Give Your Family

The scapular is found in the featured image above.  It is a garment dedicated to Mary and worn around the neck by Catholics through the centuries.  Those who wear it are promised two major things, known as the Sabbatine Privilege:

As we Catholics believe one can lose salvation after giving one’s life to Christ and even after baptism (Mt 10:22, Rom 11:22) how can a simple necklace overturn a Scriptural teaching?  It cannot.  The short answer is that wearing the scapular is a two-way street of a covenant, just like all parts of the Catholic life:   Baptism is a right as much as a responsibility.  Confessions are only valid with firm resolution of amendment.  As for the scapular, we receive the promise of no-hell and reduced Purgatory only by fulfilling our part in the covenantal relationship with Jesus and His Holy Mother:

If one fulfills the above three things while wearing the scapular, then it finally becomes easy to see that the scapular is not some type of magic charm or a get-out-of-hell-free card.  Rather, the scapular is a sacramental (a mini-sacrament) that builds upon the covenantal relationship with God that was first forged in baptism and later confirmation.  In fact, wearing the scapular is very much like a religious habit (Franciscan, Dominican, Carmelite) for all to consecrate their hearts and minds deeper to Jesus through Mary.  Fr. Richard Heilman goes so far as to write that the scapular was “a tradition among the Carmelites that when Elijah the prophet (of Mount Carmel) threw his cloak over Elisha thus imparting a double portion of his spirit to him, it was a prefiguration of Mary clothing her children with the brown scapular.”

One interesting aspect of the history of the scapular is that when one is wearing it for the wrong reasons (eg without living the requirements) the person wearing it mysteriously begins to take it off.  Philip Kosloski relates this account from the Spanish Civil War:

“During the Spanish civil war in the 1930’s, seven Communists were sentenced to death because of their crimes. A Carmelite priest tried to prepare the men for death; they refused. As a last resort, he brought the men cigarettes, food and wine, assuring them that he would not talk religion. In a short while, they were all friendly, so he asked them for one small favor: ‘Will you permit me to place a Scapular on each of you?’ Six agreed; one refused. Soon all Scapular wearers went to confession. The seventh continued to refuse. Only to please them, he put on a Scapular, he would do nothing more. Morning came, and as the moment of execution drew near, the seventh man made it clear that he was not going to ask for the priest. Although wearing the Scapular, he was determined to go to his death an enemy of God. Finally, the command was given, the firing squad did its deadly work, and seven lifeless bodies lay sprawled in the dust. Mysteriously, a Scapular was found approximately 50 paces from the bodies. Six men died with Mary’s Scapular; the seventh died without the Scapular.”

Yes, sadly it is implied in this account that the six communists went to Purgatory and one went to hell.  But actually, that is great news considering how few communists convert.   In any case, the lesson is this:  If you are wearing the scapular without faith, you will soon take it off!  If you are wearing it with faith, you will soon make a good confession!  In short, God will not be mocked (Gal 6:7) if you’re wearing the scapular for the wrong reason.

Thus, teach your family to wear it with faith, not as a magic-trick or an amulet (both sinful things) but as a religious habit belonging to Our Lady: 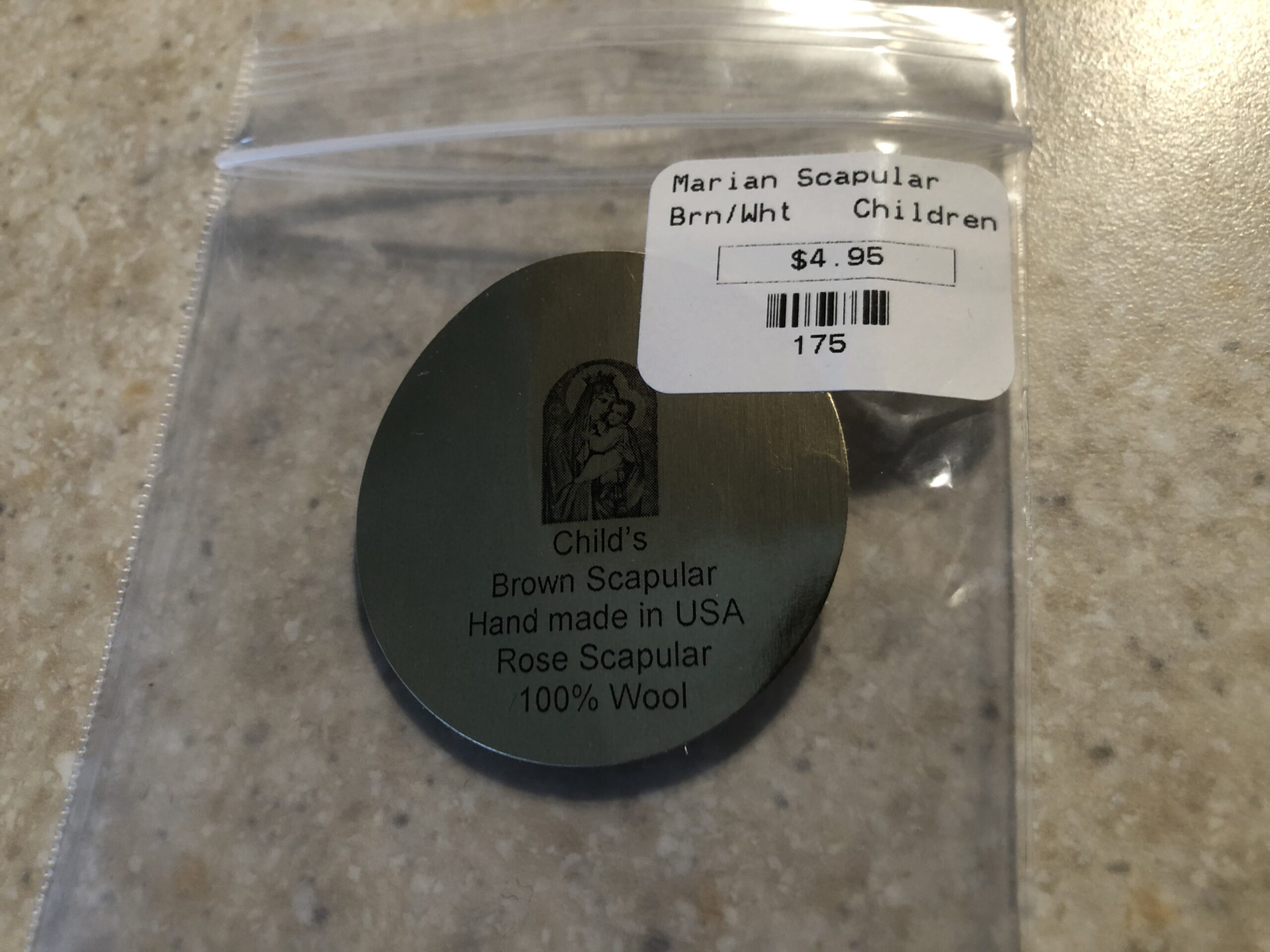 There are two steps to enrollment: 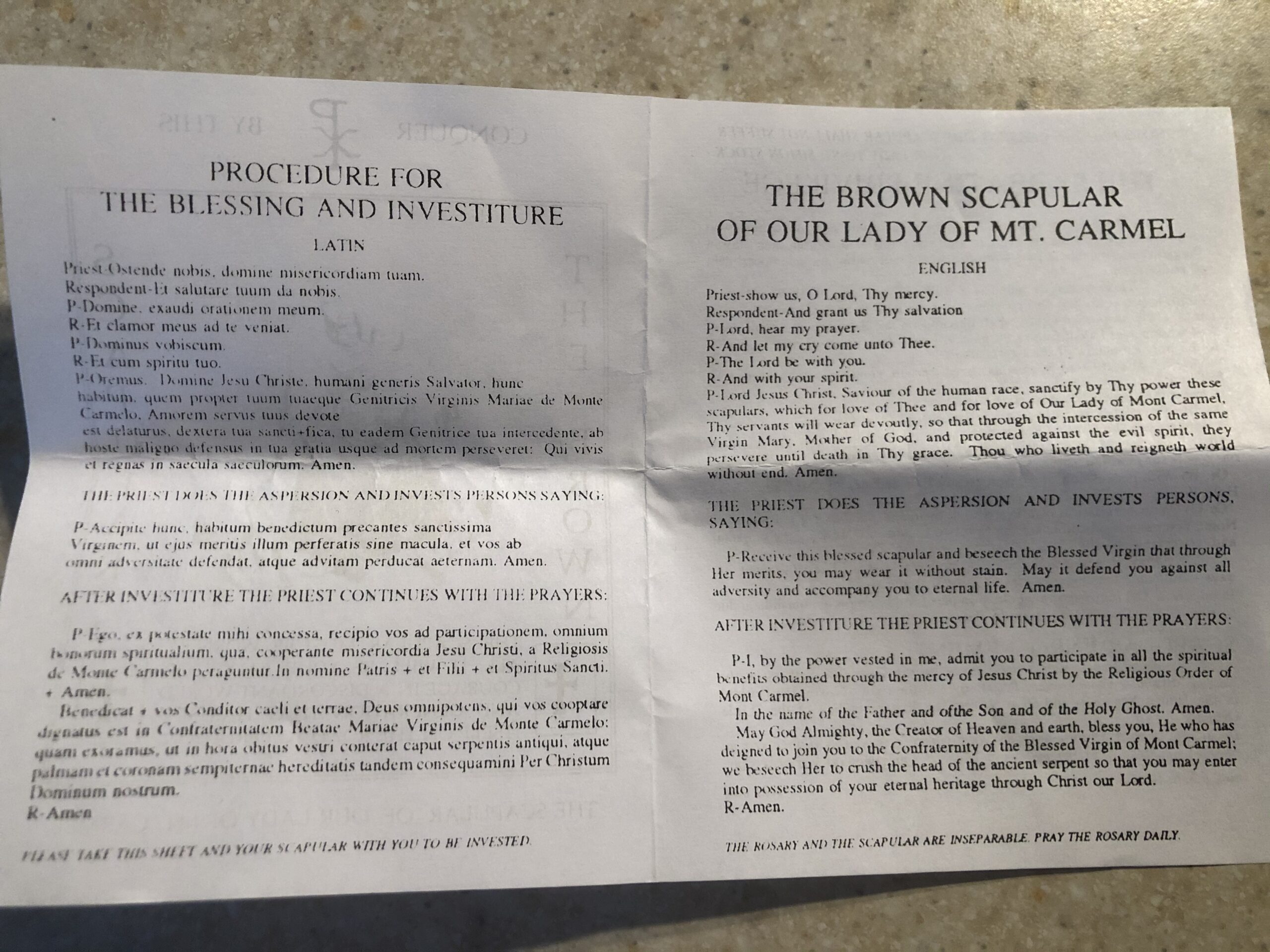