Resurrection and the Problem of Pain

I have thought a lot about “The Problem of Pain” this Lent. The Problem of Pain is the modern atheist’s main objection to believing in God:  How could an infinitely good God who is infinitely powerful allow so much evil on earth?  Indeed, there have been many books written to defend the existence of God and the goodness of God.

But the one line that kept returning to me this Lent was: “Why must we suffer? Because here below, pure love cannot exist without suffering.”—St. Bernadette.

This sounds like an oversimplification of an answer to the Problem of Pain, but it is the most perfect explanation I have ever read of the collision of Heaven and Earth.

This saint’s line implies that the Trinity in heaven contemplates the Trinity without any violence or suffering before the beginning of time, before the creation of the angels and mankind. When God created the earth, He did not intend any of the fraud, betrayal or genocides that would befall human history. But free-will in such creatures was abused, and such evils filled the planet by our own decisions, almost immediately.

Then, the most adorable second person of the Trinity, in all of His infinite charity, came to an earth that He had populated with humans, animals and plants that we had since populated with fraud, betrayal and genocide. In that case, there is only one thing that we who are evil would do to Him who is good: kill Him. Goodness from above collided with a great evil here below: me and you. 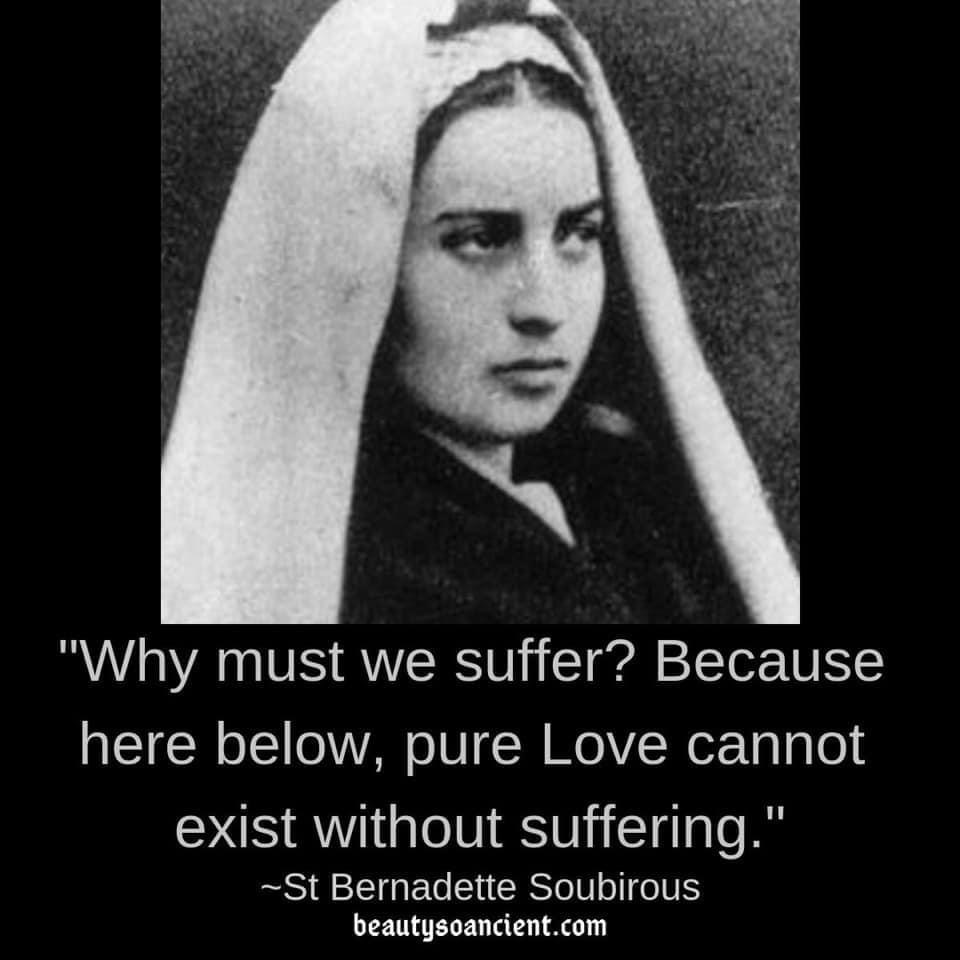 The crucifixion is a picture of True Love from Heaven trying to exist peacefully here below.  But it can not exist peacefully since we have corrupted this earth.  True Love can not exist without suffering in an earth full of rapists and literal demons.  What St. Bernadette also means in the above quote is that just as Christ (who is infinite goodness itself) came down from heaven (where pure love exists without suffering) to an earth of betrayal and hatred (where Pure Love is clearly punished by execution) then something similar would happen to His saints who try to follow Him:  All imitators of Christ of would also be attacked and punished by fallen humans influenced by fallen angels. The elect striving to live pure love here below would similarly collide with evils, and these would be those who suffer the most.

Christianity and Buddhism are the only two world religions that try to explain suffering. Buddhism proposes the extinguishing of desires (and ultimately the denial of reality) in order to eliminate suffering (or in Zen-Buddhism: perceived suffering.) Buddhism necessarily rejects compassion because of its  framework of tenne (the overturning of the mind to realize that nothing is real) and karma (that dogma that lightweight Buddhists in the West don’t realize means the full rejection of compassion.  Why is compassion rejected in true Zen Buddhism?  Because according to traditional Zen Buddhism, good-acts and bad-acts done to a suffering neighbor both need to be avoided because of his or her predetermined fate.)

Christianity, on the other hand, meets reality in a way that no atheist ever could: The Son of God, the Innocent One, with dirt under His fingernails as a man, died as a man at the hands of wicked men, all the while praying for them and praising the goodness of God, first redeeming us and secondly setting an example of suffering and forgiveness.  Forgive them Father, for they know not what they do.  Good Friday is a time on earth where True Love collides with evil. But the success of evil is only apparent and short-lived. The Resurrection of Jesus from the dead (by His own power as God) is also the moment when death was destroyed for ever, giving to His followers the pledge of an eternal song that would never again be stifled by any demon or gulag-ruler.

We just need the patience to get there by seeing what love looks like when colliding with bad people on a bad earth: an actual crucifixion.

Perhaps we could go so far as to say that Good Friday is the mercy of God where Easter Sunday is the justice of God:  God the Father exonerates God the Son.  And the Trinity will do this act of judgment (to a lesser extent) for all of His suffering ones (regardless of the sins they committed—provided they repent and confess) in the Final Judgment. The Christian requirement of patience to wait for this experience of the eschaton is the obvious rebuttal of the atheist who claims this is all pie-in-the-sky.

So, why must we wait for the Final Judgment and the Resurrection of the Body if the innocent die today? Because here below, pure love cannot exist without suffering. This is the collision of good and evil that the agnostic can not see not because the agnostic first denies the existence of God, but because he denies that this earth is actually evil.  The agnostic and atheist frequently put their hope in “humankind,” but then wonder why they are scandalized at evil in the world!

The atheist refuses to admit that God did not originally make this world full of child-trafficking and other forms of slavery. It seems too difficult to believe that there was a paradise in the garden lost and another paradise already prepared that is supersonically better.  Indeed, the patience required to get there is called supernatural faith, an act of trust rewarded by God in a delayed fashion that many agnostics can not wait for in their rebellion against God, for they wrongly ascribe to Christ (the Innocent One) a suffering that we ourselves created on this earth that Christ ironically took upon Himself.

When True Love collides with this earth, it looks like this: 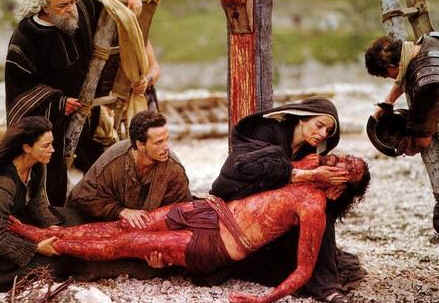 When True Love is exonerated 36 hours later, it looks like this: 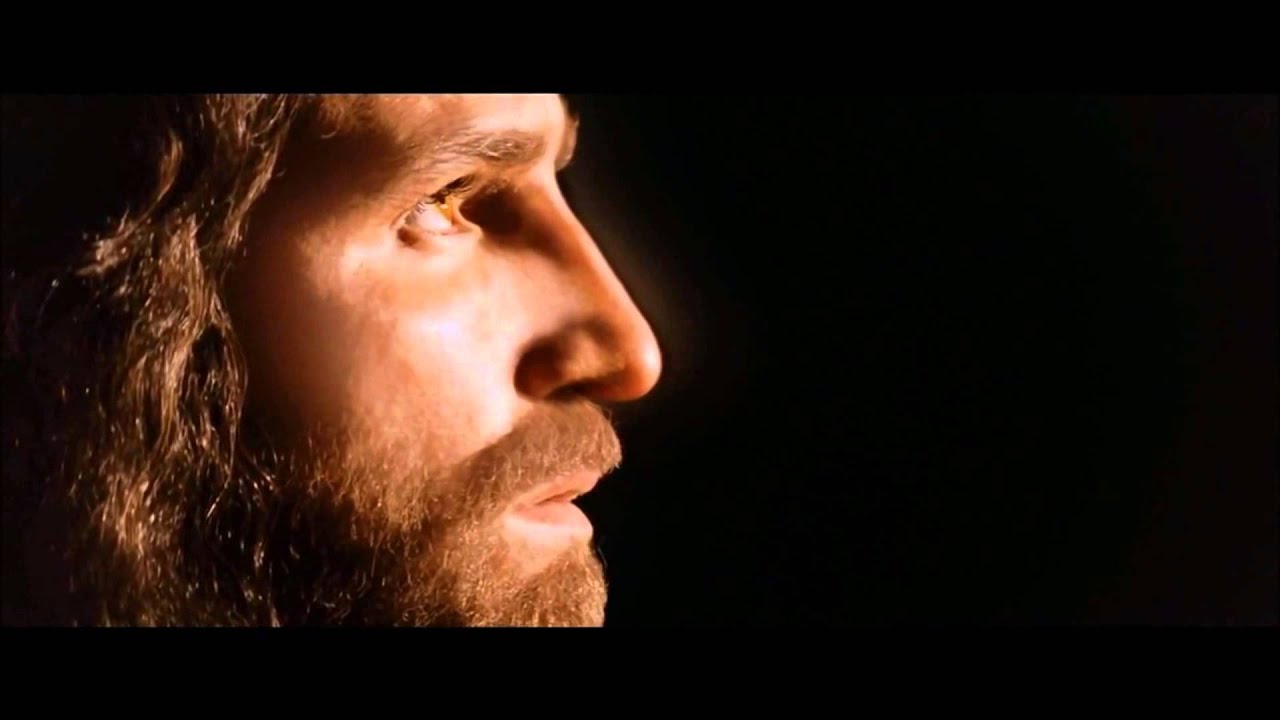