In Mary is the Way and the Truth and the Life?

Many good Catholics are often hesitant to share with Protestants the Marian writings of heavily-Marian saints like St. Louis De Montfort and St. Maximilian Kolbe.  I would number myself among such Catholics, at least at initial conversations with Baptists, Pentecostals and “non-dommers.”  Our Catholic giants of Marian theology write so much of “surrendering our life to Our Lady” that such vocabulary could be confusing to someone who has already surrendered his or her life to Jesus Christ (as well as Protestants and Catholics alike both should have.)

Even the old Divine Office seems to ascribe too much to Mary, the Mother of God.  In the set of Psalms called None (9th hour) on 11 Feb, the feast day of Our Lady of Lourdes (the Apparition of the Blessed Immaculate Virgin Mary) the reading after the Psalms from Ecclesiasticus implicitly ascribes the following Scripture passage to Mary, not to Jesus:  In me is all grace of the way and of the truth, in me is all hope of life and of virtue. Come over to me, all ye that desire me, and be filled with my fruits.—Ecclesiasticus 24:25-26

This is a striking reading to apply to Mary instead of Jesus.  The first question we have to ask is:  Is Mary pre-existent since an Old Testament reading is applied to her?  The answer to this first question is: “No, for only God is pre-existent.”  How then can it be said that the way and truth is found in Mary?  First, we must understand that every person was first a blueprint in the mind of God before He created us:  “Before I formed you in the womb I knew you.”—Jer 1:5.  Every evangelical non-denominationalist would admit that God is eternal, and therefore God (outside of time) has decisions not bound by time.  Therefore, we all agree that we all existed as a specific and beautiful thought in God’s mind before our conception.  Even then as a blueprint in eternity we were different from our neighbor,  as each soul would eventually be made “in God’s image and likeness.” (Gen 1:27)

Aristotle would call the blueprint of a book-shelf that must first exist in the mind a carpenter (before being at his hands) “the formal cause.”  The mental design of that book-shelf is the formal cause.  Mary was planned as the exclusive vessel for the Second Person of the Trinity to come from heaven to earth.  And any evangelical Protestant who went to seminary to study Christology would also have to admit this:  The perfect human person to walk the planet was not Jesus Christ since Jesus Christ is a Divine Person with a nature that is 100% divine and another nature that is 100% human.  Therefore, Jesus is 100% human, but the center of His responsibility is Divine.  Therefore, He is a Divine Person.  Mary, on the other hand, is 100% human and the center of her responsibility is human.  Mary is a human person.  (Again, I’m not saying Jesus was not human.  He obviously was 100% human who bled and cried.  But his single personhood was divine.) In short, Jesus was the most perfect (and only) divine person to walk the earth but Mary was the most perfect human person to walk the earth.  (Protestants may not grant me the last sentence.)

And if Jesus is the way and the truth, then the way and the truth are found inside Mary.  Why? Because literally inside Mary’s womb was once Jesus Christ, the Divine Word, the Second Person of the Trinity.  Inside Mary is the unborn Jesus who is the only Life and the only Truth and the only Way to the Father.  Again, every Protestant who celebrates Christmas and believes that God became man would have to agree with this.  Indeed, Jesus is God and Jesus grew His first nine months inside the womb (uterus) of the Immaculate Virgin Mary.  Therefore, in Mary (physically) was the Way and the Truth and the Life.  No evangelical Protestant could deny this.

But, they might object, Jesus was once in the womb of Mary.  No longer.  And physically doesn’t have anything to do with spiritually today.

My answer: The incarnation makes all physical realities and spiritual mysteries completely and totally commensurate.  To deny this would make you a gnostic, an early heresy against Christianity that says salvation is based on special knowledge instead of the physical blood shed by Jesus Christ.  Yes, Christians believe in an Incarnation where Jesus really cried as a baby.  True Christianity holds to the Incarnation where Jesus, the God-man, really bled on the Cross, “offering up prayers and supplications, with loud cries and tears.”—Heb 5:7.  His mother would have had His blood on her lips that day on Calvary when she kissed His dying body.  Physical reality can not be separated from spiritual reality.  This means that even today the sufferings of you as a Christian constitute Jesus mostly suffering in you, making you very close to Mary spiritually in love when you suffer. 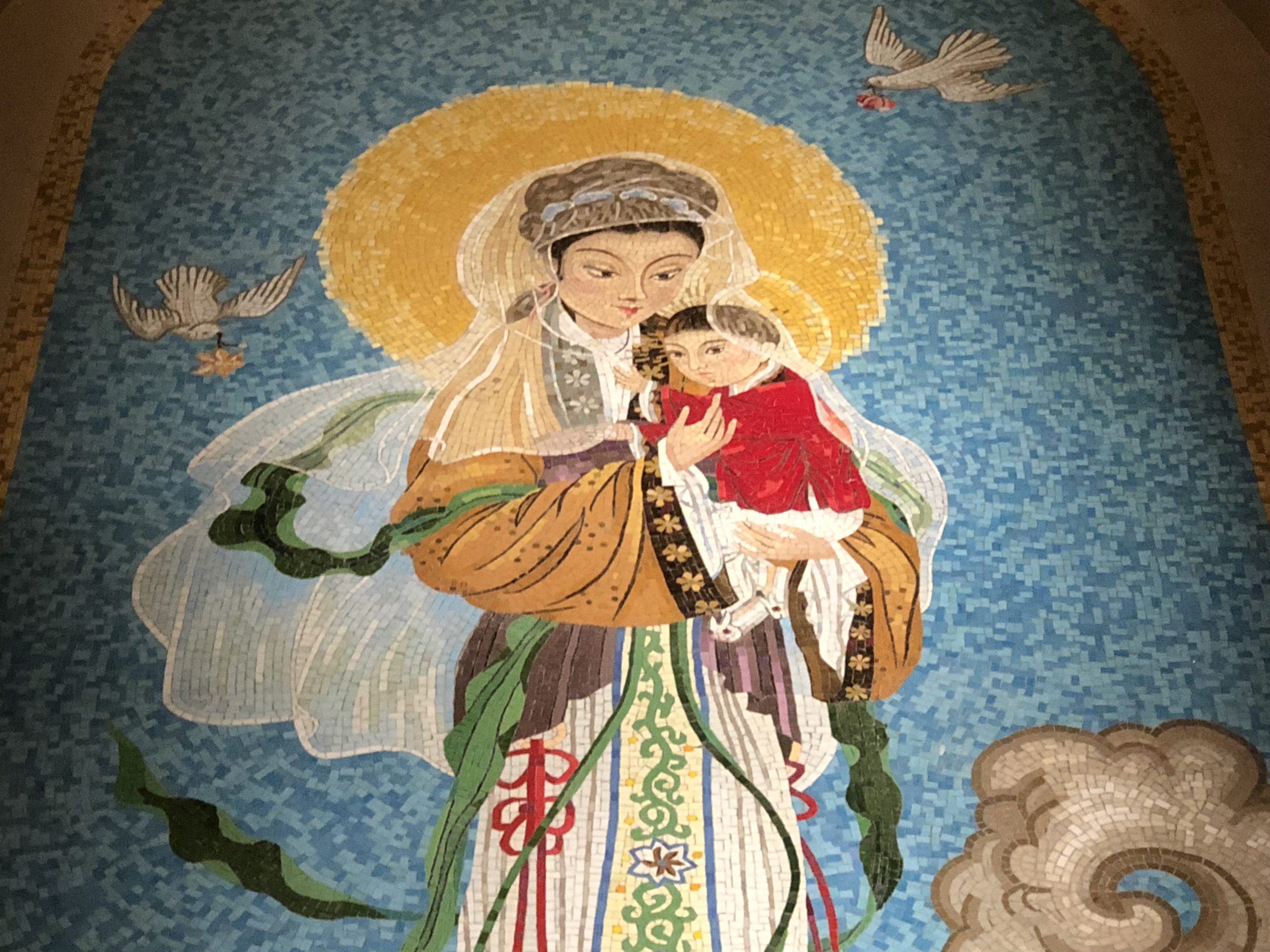 p/c:  I took both above pictures at Basilicas in the United States.  The featured image at the top is found in the Museum of St. Maximilian Kolbe north of Chicago.  The lower picture is found in the Cathedral Basilica of the Immaculate Conception in Washington D.C.