There are many good books for Catholics to purchase to defend the Catholic Faith while talking to non-Catholics on topics such as the Resurrection of Jesus Christ or the Eucharist or the Immaculate Virgin Mary or even all Scriptural topics including Purgatory.

But three debilitating moves for Catholics to use on Protestants while debating on-the-fly are as follows:

1) Disprove Sola Scriptura by reading Scripture Alone? 21 Reasons to Reject Sola Scriptura by Joel Peters.  It can be found online or in $2 pamphlets from Amazon.   It will take less than an hour to read, and it is undeniably the best little booklet to disprove the erroneous Protestant notion that Divine Revelation is found exclusively in the Bible. Consider St. Paul: “So then, brothers, stand firm and hold to the traditions that you were taught by us, either by our spoken word or by our letter.”—2 Thess 2:15. Also, why do Catholics have seven books of the Old Testament that the Protestants don’t?  Peters explains in this footnote, also found at the end of this blog post:  1

2) Ask an evangelical Protestant friend to name just one Christian in the first 1000 years of Christianity who he or she admires who did not believe in the perpetual virginity of Mary, the True Presence of Christ in the Eucharist or the intercession of deceased saints.

Re-read the bold again before continuing to let sink-in that challenge.  Dialing up that challenge to 1500 AD sounds like we’re trying to exclude the Protestant “reformers.” Thus, I like to include only the first 1000 years. Either way, we must recognize that since everyone is obsessed with imitating the early Christians (as well we should be!) just keep the “find a Protestant saint” business to the first 1000 years of Christianity. In fact, you can challenge your Protestant friend to find just one Christian in the first 500 years of Christianity who did not believe in the perpetual virginity of Mary, the True Presence of Christ in the Eucharist or the intercession of deceased saints.

He will find no one.

Or, if he is snarky, he might answer: “The Apostle Paul is my early Christian who did not adhere to Catholic dogma.” We have two ways to disprove this. First, St. Paul is explicitly Catholic in his teachings. The Apostle Paul clearly teaches the True Presence of Christ in the Eucharist (1 Cor 11) and even rejects the future goofy Protestant notion that one could be once-saved-always-saved: “Note then the kindness and the severity of God: severity toward those who have fallen, but God’s kindness to you, provided you continue in His kindness. Otherwise you too will be cut off.—Rom 11:22-23.

Secondly, other first generation Christians like St. John the Apostle did not fail to accurately convey Catholic truths (like the sixth chapter of his Gospel—”for my flesh is true food, and my blood is true drink.”—Jn 6:55) to his disciples like St. Ignatius of Antioch.  This is true to the point that the latter disciple allows for no symbolic interpretation of the former, even as early as 110AD: “I desire the bread of God, which is the flesh of Jesus Christ, who was of the seed of David; and for drink I desire his blood, which is love incorruptible.”—St. Ignatius of Antioch, Letter to the Romans 7:3, A.D. 110

Thus, you could ask your Protestant friend if Apostolic succession of dogma broke down after the death of St. Paul but before the great age of the Church Fathers.  If the Protestant says, “No, dogma did not get tainted early on,” then he should be able to find an early Christian who believed the Eucharist was merely symbolic, or any other novel Protestant tenet of theology that allegedly began before Luther and Calvin.  Again, your interlocutor will find no one to support this.

However, if your Protestant friend says “Yes, dogma did get tainted early on” then simply ask him what to do with this line: “When the Spirit of truth comes, He will guide you into all the truth, for He will not speak on His own authority, but whatever He hears He will speak, and He will declare to you the things that are to come.”—Jn 16:13. In other words, this promise of Christ has apparently failed if every early Christian fell into a putatively-erroneous Catholic dogma shortly following the death of St. Paul. 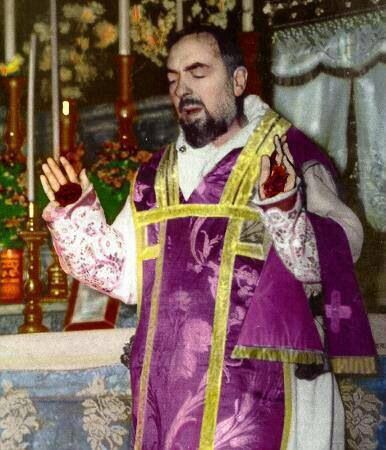 How does this saint prove the preeminently holy Church on earth?   Jesus once said of His own time, and perhaps our own: “Unless you see signs and wonders, you will not believe.”—Jn 4:48