This is actually one of my most hope-filled posts, but follow me down the bad rabbit hole of humanism for a minute before we come rocketing up to the glory of God: Most conservative pundits say that the world is now worse than previous centuries. However, most professors of world history at American and European universities teach that (except for modern wars) we now live in a world much safer, thanks to medicine, secularism and globalism. Of course, I would want to point the latter group to the millions of yearly abortions, but the Western academy will not accept that the unborn constitute an actual genocide of slaughtered human beings.

However, every once in awhile, even the liberal academy releases evidence that things are now worse now than ever in world history. The United-Nations-affiliate International Labor Organization released statistics in 2017 that there are now 40 million people in modern slavery and 152 million in child labour around the world: “The new estimates also show that women and girls are disproportionately affected by modern slavery, accounting almost 29 million, or 71 per cent of the overall total. Women represent 99 per cent of the victims of forced labour in the commercial sex industry and 84 per cent of forced marriages.” Notice that the trans-Atlantic slave trade of the 18th century had enslaved between 6 million and 7 million black slaves from Africa. 1

But the Apostle Paul writes: “Where sin increased, grace abounded all the more.”—Romans 5:20b
St. John of the Cross writes: “The Lord has always revealed to mortals the treasures of His wisdom and spirit, but now that the face of evil bares itself more and more, so does the Lord bare His treasures more.”—Dichas, #1

So, two things have been on my mind incessantly the past year as I see world history “circling the drain” (as people in EMS would rather irreverently describe deteriorating patients.)

First, I see great global hope of Christians uniting.  (Remember I have never been accused of being an optimist on this topic, so follow me closely here.)  This is because I think constantly of a mysterious, short 20-page prophetic fiction written in 1900 by the elusive Russian named Vladimir Soloviev. He called his short work Antichrist, and I linked it here on my Evernote if you want to take the 25 minutes to read it. I highly highly suggest you read it. In this short and striking tale of the future, the final global persecutor of the few remaining good Catholics, good Orthodox and good Protestants accidentally becomes the one to unite all Christians. Yes, you read that correctly: God uses the final antichrist to unite all Christians into one fold. The few remaining final Catholics, Orthodox and Protestants become one under the final Peter in this hauntingly beautiful apocalyptic tale.

Secondly, I think constantly of St. Louis De Montfort who wrote, “Mary scarcely appeared in the first coming of Christ. … But in the second coming of Jesus Christ, Mary must be known and openly revealed by the Holy Spirit so that Jesus may be known, loved and served through her.”

St. Louis De Montfort prophesies that the true apostles of the latter times will look like this:

Towards the end of the world … Almighty God and His holy Mother are to raise up saints who will surpass in holiness most other saints as much as the cedars of Lebanon tower above little shrubs.

These great souls filled with grace and zeal will be chosen to oppose the enemies of God who are raging on all sides. They will be exceptionally devoted to the Blessed Virgin. Illumined by her light, strengthened by her spirit, supported by her arms, sheltered under her protection, they will fight with one hand and build with the other.

They will be like thunderclouds flying through the air at the slightest breath of the Holy Spirit. Attached to nothing, surprised at nothing, they will shower down the rain of God’s word and of eternal life. They will thunder against sin; they will storm against the world; they will strike down the devil and his followers and for life and for death, they will pierce through and through with the two-edged sword of God’s word all those against whom they are sent by Almighty God.

They will be true apostles of the latter times to whom the Lord of Hosts will give eloquence and strength to work wonders and carry off glorious spoils from His enemies. They will sleep without gold or silver and, more important still, without concern in the midst of other priests, ecclesiastics and clerics. Yet they will have the silver wings of the dove enabling them to go wherever the Holy Spirit calls them, filled as they are, with the resolve to seek the glory of God and the salvation of souls. Wherever they preach, they will leave behind them nothing but the gold of love, which is the fulfillment of the whole law.

They will have the two-edged sword of the Word of God in their mouths and the bloodstained standard of the Cross on their shoulders. They will carry the crucifix in their right hand and the Rosary in their left, and the holy names of Jesus and Mary on their heart. 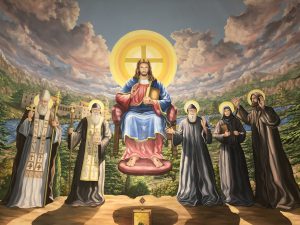