Where is the Ark of the Covenant?

About 1700 years before the birth of Jesus Christ, Joseph’s brothers sold him into slavery, so he was brought from Israel to Egypt. But due to Joseph’s supernatural ability to interpret Pharaoh’s prophetic dreams, the Pharaoh raised him to Prime Minister of Egypt:  Then Pharaoh said to Joseph, “Since God has shown you all this, there is none so discerning and wise as you are. You shall be over my house, and all my people shall order themselves as you command. Only as regards the throne will I be greater than you.” And Pharaoh said to Joseph, “See, I have set you over all the land of Egypt.”—Gen 41:39-41.

Notice that this happens in the first book in the Bible, Genesis. Soon, Joseph’s entire family arrives in Egypt, and things went well for the Jews…for awhile. The next book of the Bible (Exodus) quickly tells us in the first chapter: Now there arose a new king over Egypt, who did not know Joseph.—Exodus 1:8. The Egyptians then enslave the Jews for 430 years, all out of fear for their procreation (as all pagans are always preternaturally afraid of breeders of the true religion.)

Then, around 1200 BC, Moses led millions of Jews out of slavery to modern day Israel. His route is seen in this map here:

Sorry for the poor graphics above, but the two most important mountains in the life of Moses are Mount Sinai and Mount Nebo.  Mount Sinai is in the south of the map and Mount Nebo towards the Northeast.  Mount Sinai is where Moses obtained the 10 Commandments from God Himself. Mount Nebo is where Moses died and was buried.  Between these two mountains, millions of Jews followed the Levites who carried the Ark of the Covenant for forty years.   The Ark of the Covenant contained and still contains (somewhere in the world) the manna that God gave the Jews in the wilderness as well as the 10 commandments as well as Aaron’s rod which budded.

The end of Moses’ life is found in Exodus 34:  Then Moses went up from the plains of Moab to Mount Nebo, to the top of Pisgah, which is opposite Jericho…And the Lord said to him, “This is the land of which I swore to Abraham, to Isaac, and to Jacob, ‘I will give it to your offspring.’ I have let you see it with your eyes, but you shall not go over there.” So Moses the servant of the Lord died there in the land of Moab, according to the word of the Lord.—Ex 34:1,4-5. So Moses dies on Mount Nebo, within view of the Promised Land, the land of milk and honey, but was not allowed to enter. 1

We will return to Nebo, but for now, lets switch gears and talk about the current location of the Ark of the Covenant.

Steven Spielberg placed the Ark in his movie, Raiders of the Lost Ark, in Egypt: 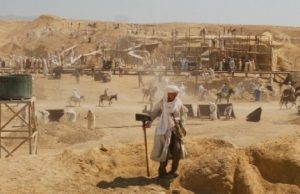 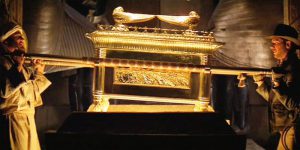 Spielberg would have been more historical to place the Ark in Ethiopia, since the Ethiopian Orthodox actually claim to this day that the Ark of the Covenant is located at their very own St. Mary of Zion Church in Axum.  In fact,  Smithsonian Magazine did a story on this.

But Catholics have a book of the Bible that Steven Spielberg did not know about:  Maccabees.  Our Catholic Bible actually tells us where to find the Ark of the Covenant today:  On Mount Nebo  (Before going further, if you doubt that Maccabees is canonical and inspired by God, please read yesterday’s blog post proving the canonicity of the Catholic Bible above and beyond the newer, cut-up Protestant Bible.)

Now we return to Mount Nebo:  About 1050 years after the death of Moses and 150 years before the birth of Jesus Christ, a Jewish-Greek author wrote Maccabees in Greek under inspiration by the Holy Spirit around 150 BC.  In it, he describes where to find the Ark of the Covenant. It turns out that the prophet Jeremiah hid it on Mount Nebo around 600 BC! The Bible tells us in 2 Maccabees:

It is also found in the records, that Jeremiah the prophet commanded them that were carried away to take of the fire, as it hath been signified: And how that the prophet, having given them the law, charged them not to forget the commandments of the Lord, and that they should not err in their minds, when they see images of silver and gold, with their ornaments. And with other such speeches exhorted he them, that the law should not depart from their hearts. It was also contained in the same writing, that the prophet, being warned of God, commanded the tabernacle and the ark to go with him, as he went forth into the mountain, where Moses climbed up, and saw the heritage of God. [Mt. Nebo] And when Jeremiah came thither, he found an hollow cave, wherein he laid the tabernacle, and the ark, and the altar of incense, and so stopped the door. And some of those that followed him came to mark the way, but they could not find it. Which when Jeremiah perceived, he blamed them, saying, ‘As for that place, it shall be unknown until the time that God gather His people again together, and receive them unto mercy. Then shall the Lord shew them these things, and the glory of the Lord shall appear, and the cloud also, as it was shewed under Moses, and as when Solomon desired that the place might be honourably sanctified.’—2 Macc 2:1-8

Notice that the author (around 150 BC) is describing something spoken by the prophet Jeremiah (who died around 600 BC.)  The Maccabean author shows that although Jeremiah revealed that the Ark of the Covenant is buried somewhere on Mount Nebo, we are not to know exactly where it is.  In fact, future generations will not know exactly where it is until “God gathers His people again and receives them into mercy.”—2 Macc 2:7. Although this could be anytime in the New Covenant (after the Passion, Death and Resurrection of Christ) we have no evidence that the Ark has been discovered, unless the Ethiopians provide some evidence (which they haven’t, and won’t, because their tradition is to not show the goods.)

I will transliterate this Greek as best as I can with the underlining coordinated to the above underlining:  Unknown the place will be until God synagogues the synagogue of the people and becomes mercy and the glory of the Lord is shown in the cloud.  Notice that this is a play on words, namely, that the noun “synagogue” (meaning a gathering) can being used as a verb, “gathering.” So, the location of the Ark of the Covenant is not going to happen until God “gathers the gathering” or “synagogues the synagogue” (!!!)

What could this possibly mean?  I believe this is a reference to the end of the world, when God will gather the Jews into the Catholic Church.

The first proof we have of this is through St. Paul:  For I would not have you ignorant, brethren, of this mystery, (lest you should be wise in your own conceits), that blindness in part has happened in Israel, until the fulness of the Gentiles should come in. And so all Israel should be saved, as it is written: There shall come out of Sion, he that shall deliver, and shall turn away ungodliness from Jacob.—Romans 11:25-26. St. Paul certainly did not mean that every Jew will go to heaven, but that Israel will have her eyes opened to the Messiah, Jesus Christ, and that there will be a massive influx of Jews into the Catholic Church at the end of time.  This new Catechism of the Catholic Church also holds this:

The glorious Messiah’s coming is suspended at every moment of history until his recognition by “all Israel”, for “a hardening has come upon part of Israel” in their “unbelief” toward Jesus. St. Peter says to the Jews of Jerusalem after Pentecost: “Repent therefore, and turn again, that your sins may be blotted out, that times of refreshing may come from the presence of the Lord, and that he may send the Christ appointed for you, Jesus, whom heaven must receive until the time for establishing all that God spoke by the mouth of his holy prophets from of old.” St. Paul echoes him: “For if their rejection means the reconciliation of the world, what will their acceptance mean but life from the dead?” The “full inclusion” of the Jews in the Messiah’s salvation, in the wake of “the full number of the Gentiles,” will enable the People of God to achieve “the measure of the stature of the fullness of Christ”, in which “God may be all in all.”—CCC 674

Thus, the Ark of the Covenant is still located on Mount Nebo near the Dead Sea and Jericho but the specific location will probably not be revealed until near the end of the world. 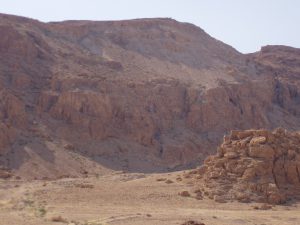 As the prophet Jeremiah promised in the Bible: As for that place, it shall be unknown until the time that God gather His people again together, and receive them unto mercy.—2 Macc 2:7

Eschatologically, remember: Mary is the new Ark of the Covenant as she carried the law of love in her heart as well as the bread from heaven, Jesus Christ (John 6). Remember: The Ark of the Covenant is always considered in typology to be the pre-eminent type or symbol of Mary in the Old Testament because her visit to Elizabeth (Luke 1) reflecting the rejoicing of King David when the Ark of the Lord came to Him (2 Sam 6-7)  Remember:  Mary is the exemplar of the Church—she to whom the Church is striving to be in heaven at the end of time.  Remember: Mary’s body in heaven but entirely genetically Jewish, making her the full daughter of Zion in the heavenly Jerusalem.

Put this all together and you have the obvious conclusion that: Mary is to be the Mother of the Jewish people at the end of the world, when she is to be revealed as the new Ark of the Covenant as well as the mother of the Eucharist and the true daughter of Zion and the Jewish people.   God will then “synagogue His synagogue” of Jews as they recognize Jesus Christ as God, friend, Savior and Messiah, and the original Ark of the Covenant will be found on Mount Nebo with the 10 Commandments, Aaron’s sprouted rod and even the manna from heaven.

Or…the Ethiopians already have it: 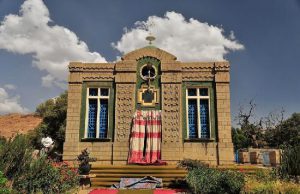