The Image of God in the Human Face

St. Louis De Montfort teaches that Lucifer and all the angels were given a preview that one day, a creature would contain more glory than the angels. That creature is the Blessed Virgin Mary. So infuriated was Satan that a creature would be higher than him, that Lucifer (now Satan) led a third of the angels to rebel against God. St. Michael ejected the rebel spirits to the earth. So, eons later, Satan went to pursue Mary and her child: “And when the dragon saw that he had been thrown down to the earth, he pursued the woman who had given birth to the male child.”—Apocalypse 12:13

Both before and after Satan’s failure at spiritually overcoming the woman and the child, he decided to turn against the image and likeness of God on earth—man and woman. Like Mary, we are each born with God’s image upon our souls. Unlike Mary, we are born without God’s likeness, due to original sin. However, baptism restores God’s likeness in us, bringing us to be children of God in both His image and likeness. This spiritual reality is so Trinitarian that St. Francis of Assisi used to genuflect before newly-baptized babies. The soul reflects God, even in a Triune nature (intellect, memory and will.) Physically, however, there is something in the human face that also reflects the glory of God: 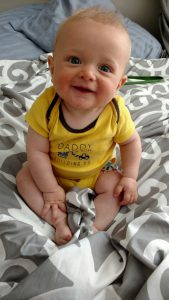 This is a child born to a couple that I married in my University ministry.  He was made in God’s image and likeness, but his likeness was remade the day of his baptism because this was lost after this most-important event of creation:  “And God made man, according to the image of God he made him, male and female he made them.”—Genesis 1:27. The word in the Greek Septuagint (Septuagint being the Old Testament translation from Hebrew to Greek done by 70 elders) uses the words according to the image of God as three words even more power-packed and short in the Greek, κατ᾿ εἰκόνα Θεοῦ. When εἰκόνα is written in Latin letters it becomes eikona, where we get the word “icon.” Man and woman are icons of God. Satan hates a face like that.

Suffering under Nazi Germany, an Austrian couple, Erik and Christiane Von Kuehnelt-Leddihn, wrote a book called Moscow 1979. In it, a bishop in Russia talks to a dead body, but that dead body becomes possessed by Satan. Satan explains through that body his actual tactic for reaching humanity in 20th century:

I am not mean! I’m only radical. ‘Radical’ – that is to say ‘from the roots.’ And sex is the root of all life. Nothing pleases me more than to turn the natural instinct for creation of new bodies and souls into the vilest filth. I hate those human beings who are allowed to take part in God’s creation. At least it is some consolation for me if human beings play tricks on God …if experimental biology is victorious over the curse of Eve, cheating women out of the joy of suffering for the sake of a new being. I don’t want the Creation! And if I’m not able to exterminate it, at least I can twist it, smear it, distort it! 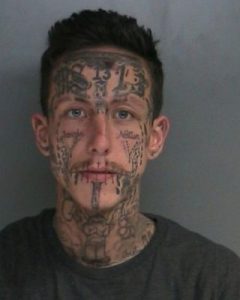 I’m not using this picture for shock-value. But I have to be very honest: I used to see people in circles like this as the enemy of the Catholic Church. Oh sure, I admitted that God loved them, but I saw them as the enemy in a culture war. Now, as things get so twisted, I see they are deceived. How prophetic that in 1940 those Austrians saw that “experimental biology” would be the goal of Satan in communism and secularism: “And if I’m not able to exterminate it, at least I can twist it, smear it, distort it!”

This gang member is obviously deceived by Satan. No, beauty is not in the eyes of the beholder.  There is objectivity to beauty, as there is truth.  And what I see is boys-become-semi-men who were so abused (not necessarily sexually, but in some way abused) finishing the job of twisting what the Ugly One had begun against them.  Yet, they don’t know to whom they belong as hostages. Or maybe they do, since many gang members add satanic tattoos.  But still they are hostages, and Jesus told St. Faustina: The greater the sinner, the greater he has a right to my mercy.

A young woman from an Eastern-block country recently wrote me about her conversion from atheism to Catholicism. She told me how many tears she has wept for what Communism did to not only her country, but what Communism has done to her new-found Catholic Church. One particularly sad story was the story of an 18 year old homosexual man in the rural area of her country.  When he failed at chastity, the rural priests helped him back up, and again when needed.  He was succeeding, albeit with difficulty.  Then, he moved to a large city in “middle-Europe” as she calls it.  There, in that large city, he found a Catholic priest with very different advice than he had ever heard: The priest told him that he could continue his homosexual behavior, as long as it is done “in good faith.”

Now the young man has AIDS. He no longer goes to Church and lives with his boyfriend.

Jesus is infinite Truth and Jesus is infinite Mercy, so please, you priests who are telling gay men and women that they don’t have to live chastity: You are killing people. Not just spiritually as we “trads” say, but now we have proof you are killing people physically. The outcome of your trashing of Catholic teaching is not only hell (which I can’t prove outside of Divine Revelation) but AIDS (which the above story proves.) When we distort Christian doctrine, we distort peoples’ souls and bodies.  Jesus and the Catholic Church have the best plan for every person on the planet, so please stop discriminating and show some compassion for the image and likeness of God that He died to restore. Jesus was disfigured on the cross so that none of the above disfigurement would ever have to happen.  Thus, we priests have no right to sacrifice our children on the altar of popularity. They are God’s children, made in His image and likeness. 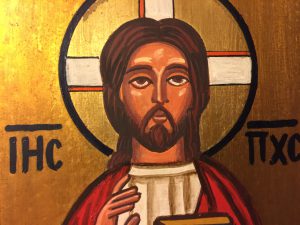