Today is the Memorial of the 40 Roman Soldiers who banded together in modern day Armenia, refusing to renounce Christ.  St. Basil writes of their glorious and manly martyrdom:

These holy martyrs suffered at Sebaste, in the Lesser Armenia, under the Emperor Licinius, in 320. They were of different countries, but enrolled in the same troop; all in the flower of their age, comely, brave, and robust, and were become considerable for their services. St. Gregory of Nyssa and Procopius say they were of the Thundering Legion, so famous under Marcus Aurelius for the miraculous rain and victory obtained by their prayers. This was the twelfth legion, and then quartered in Armenia. Lysias was duke or general of the forces, and Agricola the governor of the province. The latter having signified to the army the orders of the emperor Licinius for all to sacrifice [to false gods], these forty went boldly up to him, and said they were Christians, and that no torments should make them ever abandon their holy religion. The judge first endeavoured to gain them by mild usage; as by representing to them the dishonour that would attend their refusal to do what was required, and by making them large promises of preferment and high favour with the emperor in case of compliance. Finding these methods of gentleness ineffectual, he had recourse to threats, and these the most terrifying, if they continued disobedient to the emperor’s order, but all in vain. To his promises they answered that he could give them nothing equal to what he would deprive them of; and to his threats, that his power only extended over their bodies which they had learned to despise when their souls were at stake. The governor, finding them all resolute, caused them to be torn with whips, and their sides to be rent with iron hooks; after which they were loaded with chains, and committed to jail.

After some days, Lysias, their general, coming from Caesarea to Sebaste, they were re-examined, and no less generously rejected the large promises made them than they despised the torments they were threatened with. The governor, highly offended at their courage, and that liberty of speech with which they accosted him, devised an extraordinary kind of death, which, being slow and severe, he hoped would shake their constancy. The cold in Armenia is very sharp, especially in March, and towards the end of winter, when the wind is north, as it then was, it being also at that time a severe frost. Under the walls of the town stood a pond, which was frozen so hard that it would bear walking upon with safety. The judge ordered the saints to be exposed quite naked on the ice; and in order to tempt them the more powerfully to renounce their faith, a warm bath was prepared at a small distance from the frozen pond, for any of this company to go to who were disposed to purchase their temporal ease and safety on that condition. 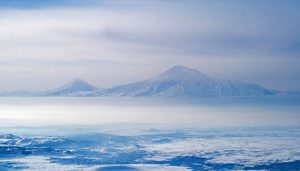 The martyrs, on hearing their sentence, ran joyfully to the place, and without waiting to be stripped, undressed themselves, encouraging one another in the same manner as is usual among soldiers in military expeditions attended with hardships and dangers, saying that one bad night would purchase them a happy eternity. They also made this their joint prayer: “Lord, we are forty who are engaged in this combat; grant that we may be forty crowned, and that not one be wanting to this sacred number.” The guards in the mean time ceased not to persuade them to sacrifice [to false gods], that by so doing they might be allowed to pass to the warm bath. But though it is not easy to form a just idea of the bitter pain they must have undergone, of the whole number only one had the misfortune to be overcome; who, losing courage, went off from the pond to seek the relief in readiness for such as were disposed to renounce their faith; but as the devil usually deceives his adorers, the apostate no sooner entered the warm water but he expired. This misfortune afflicted the martyrs; but they were quickly comforted by seeing his place and their number miraculously filled up. A sentinel was warming himself near the bath, having been posted there to observe if any of the martyrs were inclined to submit. While he was attending, he had a vision of blessed spirits descending from heaven on the martyrs, and distributing, as from their king, rich presents and precious garments; St. Ephrem adds crowns to all these generous soldiers, one only excepted, who was their faint-hearted companion already mentioned. The guard, being struck with the celestial vision and the apostate’s desertion, was converted upon it; and by a particular motion of the Holy Ghost, threw off his clothes, and placed himself in his stead amongst the thirty-nine martyrs. Thus God heard their request, though in another manner than they imagined: “Which ought to make us adore the impenetrable secrets of his mercy and justice,” says St. Ephrem, “in this instance, no less than in the reprobation of Judas and the election of St. Matthias.”

In the morning the judge ordered both those that were dead with the cold, and those that were still alive, to be laid on carriages, and cast into a fire. When the rest were thrown into a waggon to be carried to the pile, the youngest of them (whom the acts call Melito) was found alive; and the executioners, hoping he would change his resolution when he came to himself, left him behind. His mother, a woman of mean condition, and a widow, but rich in faith and worthy to have a son a martyr, observing this false compassion, reproached the executioners; and when she came up to her son, whom she found quite frozen, not able to stir, and scarce breathing, he looked on her with languishing eyes, and made a little sign with his weak hand to comfort her. She exhorted him to persevere to the end, and, fortified by the Holy Ghost, took him up, and put him with her own hands into the waggon with the rest of the martyrs, not only without shedding a tear, but with a countenance full of joy, saying courageously: “Go, go, son, proceed to the end of this happy journey with thy companions, that thou mayest not be the last of them that shall present themselves before God.” Nothing can be more inflamed or more [moving] than the discourse which St. Ephrem puts into her mouth, by which he expresses her contempt of life and all earthly things, and her ardent love and desire of eternal life. This holy father earnestly entreats her to conjure this whole troop of martyrs to join in imploring the divine mercy in favour of his sinful soul. Their bodies were burned, and their ashes thrown into the river; but the Christians secretly carried off or purchased part of them with money. Some of these precious relics were kept in Caesarea, and St. Basil says of them: “Like bulwarks, they are our protection against the inroads of enemies.”