How to Pray for Your Enemies

The Catholic Church has taught from the days of St. Paul that it is the duty of state to use the death penalty. 1

The theory of “just war” is also an important part of the infallible moral teaching of the Catholic Church, especially as one forms the  leaders of state. But today’s post is not about how to deal with enemies at the national level, but how to pray at the personal level. Jesus Christ said “But I say to you, Love your enemies and pray for those who persecute you.”—Matthew 5:44. Notice that such a command does not make that person not-your-enemy! Love your enemies presupposes that you are a real enough person to actually have real enemies. Not just imaginary pseudonyms from social media who want to kill you with the push of a button.

You see, simply the idea of having an “enemy” is jarring to the post-modern mind. We tend to put unity before truth. So, it’s strange that Jesus Himself had enemies. It’s tough for us Americans to grasp this, for we generally want to get alone with everyone. This is not bad, but it is bad to value unity above truth.  God’s reality for our planet is that unity flows from truth.  Anyone who lives this reality of metaphysics will have some enemies.   Having enemies is actually necessary to get to heaven, for we need enemies to get there, primarily so that we can live the Beatitudes.

The above is a photo of desperate families escaping from Khorsabad, a town controlled by ISIS which was under Peshmerga fire. How is it that the tradition of the Catholic Church could have the Knights Templar killing Muslims at the siege of Malta and still believe in a Savior who said Love your enemies and pray for those who persecute you? We have to look past the muddled theology of the past 50 years to see that the tradition of the Catholic Church actually has a more practical and more merciful approach to enemies than a new feelings-based theology. In fact, our answer today is going to come from an official prayer of the Traditional Latin Mass for enemies. Remember, this Mass was not created by a group of Catholics and Protestants sipping espresso in an Italian coffee shop, but it’s roots are “apostolic” by the infallible words of the Council of Trent. Certain parts were later changed or formulated under the blood of martyrs and the fastings and vigils of select saints over very slow centuries. So, almost all of prayers of the Traditional Latin Mass can be traced to time between the 1st and 7th century AD. This is why we can say that the liturgy is a look into the mind of God, even in reference to a single Oratio for an enemy.

As I wrote, there is actually a prayer for enemies in the Traditional Latin Mass, and this shows the mind of God: 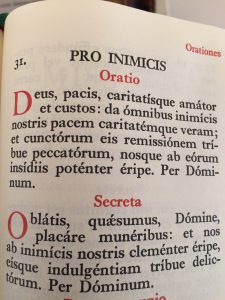 One translation of the top prayer from the 1962 Missal is as follows:

Let’s parce out this beautiful and powerful prayer to see how it is more merciful and practical than anything that could come from a manmade or fabricated liturgy.

Grant to all our enemies true peace and charity
I personally find it astonishing to see that the ancient tradition of the Catholic Church has something more merciful and practical for enemies than anything I found in the first five years of my priesthood praying the Mass of Paul VI. In other words, the intense saints of old all prayed that God would actually grant “peace and charity” to all their “enemies.” This presupposes that priests and saints have enemies.  Thus, it is a prayer that takes blood, sweat and tears.  The old Mass is so subtle, but perfectly crafted in every word.  The liturgy is the bridge between God and man, even for issues as gritty as enemies.  When that bridge is broken, we will forget how to live even the practical sides of life, including prayer for our enemies.

This above Oratio or prayer hits all the transcendentals: Truth, beauty and goodness. It recognizes, however, that the final transcendental of oneness (or unity) can not be met by a fabricated form of man’s peace, but rather only Christ’s peace. This is a peace that has not been accepted by most of the world, as seen in the top picture of ISIS destroying more lives.  We can not fake peace with the Muslims or even Catholic heretics that infiltrate the Church.  But Jesus does not lose peace.  In fact, He gives it in a deep but counter-cultural way: “Peace I leave with you; My peace I give to you. Not as the world gives do I give to you. Let not your hearts be troubled, neither let them be afraid.”—John 14:27 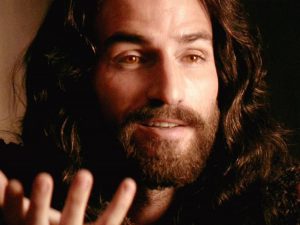 By Thy power deliver us from their wiles.
I really, really love this part of the prayer. We pray nosque ab eorum insidiis potenter eripe which is: “Rescue us from our enemies’ insidious plans, by Your power!” This shows that the fulness of Catholicism is very practical, not amorphous or nebulous. Let’s put it all together: “God, please grant peace and love to my enemies, but keep them far from me and my loved ones!” Real people and great saints (usually one in the same like St. Paul) were not people-pleasers. They were great lovers of the person who stood before them, enough to die for their enemies. So also, we do not deny the harm done to us by our enemies, but we love them, forgive them and pray for them. 2

You see, we  still (barely) live in a world more real, more material, more direct than the virtual reality of an Oculus. It will get more real when terrorist attacks increase on our soil, surely coming in 2017.  Because life is real, material and direct, we need prayers that are real, material and direct. “God, please love on my enemies, but stop them from affecting my life.” Let’s pray this prayer boldly for and against 1) the enemies of tradition, 2) the enemies of unborn life and 3) the enemies of middle-Eastern Christians.

We need gritty, merciful and practical prayers like this.  2016 was a year that produced an estimated 90,000 martyrs. We have had 900,000 martyrs the past 10 years. The tradition of the Church is under siege and enemies of the pro-life movement have no intention of stopping killing babies just because Trump was elected today. I snapped this in New Orleans just a few days ago, and it perfectly illustrates love of enemies, even the enemies of innocent and tiny little children like this “death-scort.” Notice the joy of the Catholic woman behind her, as she prays her Rosary. 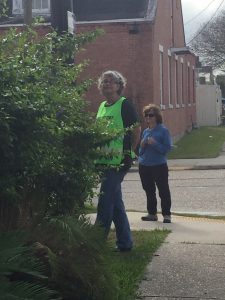 So, God of peace and charity, please grant peace and charity to all our enemies and even the remission of their sins. But also Lord, rescue us quickly and powerfully from their evil designs.