Luther’s rebellion against the Apostolic Faith turns 500 years old, and yet some Catholics actually consider his “reforms” to be a cause of admiration and celebration.  Instead of theological alarms, lets just do some myth-busting of bad European history.  Let’s consider the truths of German history, both medieval and 20th century.

The First Myth to be busted is that Martin Luther was a gentle, reforming monk.  The truth is that by any modern standards, he was a sociopath.  Like Hitler, Luther chose to incite violence by declaring that “Jews and Papists are ungodly wretches.  They are two stockings made of one piece of cloth.”  He once wrote a book called The Jews and Their Lies (seen below) in which he stated that because God struck the Jews, “We are at fault in not slaying them.” 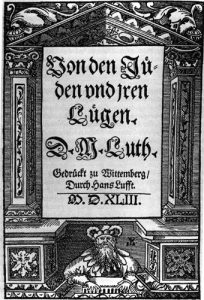 Later, his invective became even more violent against Jews, for he declared:  “They are our public enemies.”  In his second to last sermon before dying, on 18 February 1546, Luther gave what he called his “final warning” against the Jews.  This was all a precursor and inspiration to Hilter’s “Final Solution.”  In the 1930s, the first major wave of violence against German Jews was called Kristallnacht, crystal-night, or night-of-glass, named because of how many Jewish store-fronts were shattered.   After this initial violence, “Bishop” Martin Sasse, of the Evangelical Lutheran Church in Germany “applauded the burning of the synagogues [for]…on November 10, 1938, on Luther’s birthday, the synagogues are burning in Germany.”   Heinrich Himmler, head of Hitler’s SS, wrote of his admiration of Luther throughout the Holocaust.  In fact, almost every anti-Jewish book printed in the Third Reich quoted Martin Luther as a major impetus to eradicate the Jewish people. 1 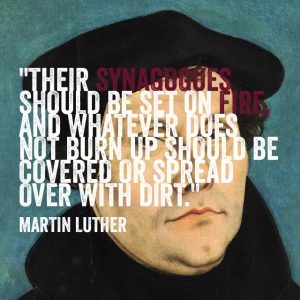 We reach the 500th anniversary of Martin Luther’s revolt against the Catholic Church.  Some Catholics are actually going celebrate this heretic who hated Jews!  I hope that none of my readers would celebrate this major-inspiration to the Holocaust.  Even secular history will judge those who do.

As a side note before we get to our second short study, it should be noted that there were many heroic Protestants in the Holocaust who stood up to the Nazis and paid the ultimate price of discipleship, like Dietrich Bonhoeffer. 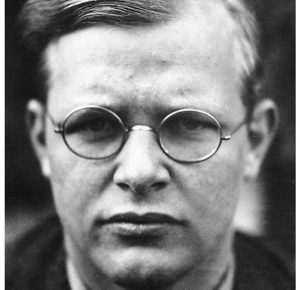 The Second Myth to be busted is Pope Pius XII, the Pope during the Holocaust.  Let me say first that I am not sure if most of the bishops of Europe stood as courageously against the Third Reich and axis powers as they should have.  Perhaps Pius XII could have issued more documents, letters and admonitions of resistance to the European people against the Nazi Regime and Mussolini.  However, the facts speak louder than speculation:  The current, online Jewish Virtual Library holds that Pope Pius’ XII saved 860,000 Jews, many of whose descendants are still alive all over the world today.  This Pope was truly a Christian man during the holocaust, not “Hitler’s Pope” as he was dubbed.  His saving of 860,000 Jews was an inspiration to people of the early 20th century, both Jewish and Christian alike. 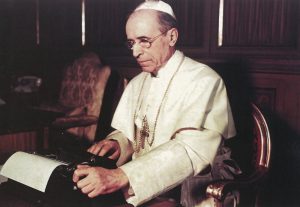 One such Jew who knew that he was not Hitler’s Pope was the chief Rabbi of Trieste (Rome) when Mussolini was in power.  Rabbi Israel Zolli was his name.  He was a devout and serious Orthodox Jew as well as a learned scholar of the Talmud and of Semitic literature.  Perhaps because of this, Pope Pius XII was able to lead him to see Jesus as the fulfillment of all Hebrew Prophesy.  This great rabbi of Rome ended up becoming a Catholic.  Rabbi Zolli was baptized by Pope Pius XII himself.  Below, Rabbi Israel Zolli is found walking on the right.  To the left is Fr. Gosselino Birola, the priest who hid Rabbi Zolli from the Nazis on the grounds of the Gregorian Institute during WWII. 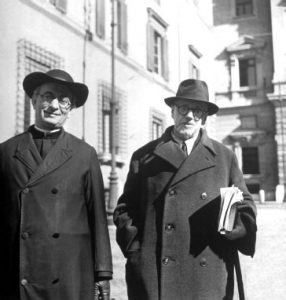