Just in time for the Olympics, I have some good things to say about the clothing of female athletes below, but you’ll have to wait for that.

Many of you know the historical roots of the bikini:  French engineer Louis Réard worked in his mother’s lingerie shop in the 1940s.  There, he designed and got the word “bikini” from the name of the first post-bellum atomic-bomb site, Bikini Atoll, for obvious reasons.  He tried to find a French model to first debut his invention in 1946, but he could not find one.  He ultimately had to hire a stripper.  It took a while for the bikini to catch on in the United States.  As late as 1957, Modern Girl magazine said “No girl with tact or decency would ever wear such a thing.”

And so do I, but from the other side of the spectrum.

Here’s why:  The only difference you’re really talking about anymore  between a one-piece and bikini is the bellybutton.  But the belly button doesn’t make men lust.  Breasts probably don’t make men lust either, at least when seen from a global-outlook.  What I mean is this:  Most pre-Christianized cultures protected the area below women’s waistlines much more than the top side of the female anatomy.  For most tribal men, there is nothing too tempting about topless women. I can tell you this is true, for I have been to Africa. Women are well-covered below the waist even when minimally covered on top.

In a natural environment, men’s minds finish the lines and complete the picture, especially below the waist. For men, women’s legs don’t point out thighs.  Legs point not to admiration but provocation, especially when the whole person is not encountered (as is only possible in marriage, but that proof shall wait for another post.) 1  In non-perverted societies, women see the need to protect their upper-legs from the stares of men.

I am not saying that Christian women in America or Africa should go topless, but I am saying that even pagan cultures have been forced to maintain a sustainable society by eradicating adultery as much as possible.  This is greatly accomplished by long dresses on their women.  I’m serious.  Here’s where swimsuits dovetail into this:  The bottom part of both bikinis and 98% of Western one-pieces both provide men the same visual as her panties.  But perhaps America misses this because of her obsession with breasts.  We who live in an artificially-constructed sexual environment of implantations can learn a lot from the fact that in a natural environment, there is more temptation to a man below the female waist than above the waist.  2

More than half of the male population is addicted to pornography.  Moms, this is not your fault, but it is your responsibility to protect your daughters at the pool.  At least start with the knee-lengths that some female Olympians wear: 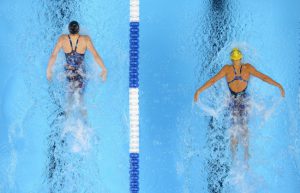 The brains of men and women are different—both in glory and in concupiscence.  Ladies, imagine a guy you just met made you feel yourself the most special, beautiful and protected creature on the planet, and then he tells you that you are the only one. That’s commensurate (but not exact) to what happens chemically in the male brain when he sees as much skin as provided by most modern female swimsuits—one piece or bikini.  Yes, we’re more crude than you who are moved by emotions more than flesh.  I’ll even venture that you’re generally closer to God than us.  But aiding the redemption of the opposite sex must compensate and anticipate the complementary wounds of original sin.

The Mother of God said to the children of Fatima in 1917 in Portugal: “More souls go to Hell because of sins of the flesh than for any other reason… Certain fashions will be introduced that will offend Our Lord very much…Woe to women lacking in modesty. ” 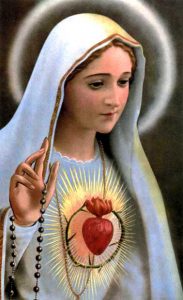 Do you really think that the Mother of God would approve of little Jacinta wearing a “one piece” in public? God forbid even the visual.  I guarantee Our Lady would declare this to be mortal sin.

You say: “But times were different 100 years ago! It was a different culture!”  Yes. I agree. It was a different culture back then when not nearly a fraction of the men were addicted to pornography as today.   I once had a conversation with the Chicago division of the FBI’s chief of child-cyber-crimes department.  If you had heard a fraction of this conversation, each of you mothers and fathers would promise that you would never let your daughters dress in a one-piece or bikini outside the bathtub again.

With all this preaching, I should provide some solutions (for next summer, since I’m three months late on this post!)  One option is the line of relatively-modest swimsuits from Jessica Rey.  Another option is to simply question the system.  Ever wonder why we think it’s normal for there to be public bathing between stranger men and young girls in visually-nothing-more than their underwear?

Why do we take this hook-line-and-sinker?  You can find some websites that doubt the idea that bikinis started in 1946.  But these histories point back to ancient Rome and Greece.  Remember that the Bible gives the Jews the instructions on what to do with immodest gymnasiums from pagan cultures:  Reject them.  In 1 and 2 Maccabees, the last period of martyrs before the arrival of Jesus, many Jews lost their life for refusing (among other things like Greek worship) public gymnasiums.  That is God’s word, not mine.

When I went to India for the first time two years ago, I went to Goa where St. Francis Xavier had first evangelized and baptized thousands.  My friend and I were swimming in the Arabian Sea at dusk. 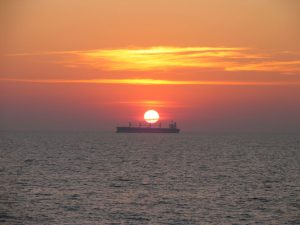 I was shocked to see that Indian women did not swim with men.  There were separate locations and times.  So, that evening, I saw that the women kept their long, flowing, cool-fitting saris as they walked the beach.  The only immodestly-dressed women were white women.  This was great evidence that American sociology departments never meant that progressive Americans should respect the cultural norms of other countries.  They meant Christians should respect the cultural norms of other countries by never speaking of Christ.  This is a sad self-restraint of the West upon herself, since Christianity alone will help bring India out of the child-rape culture.  3

Let me also point out that when I was in Rwanda, I never saw co-ed swimming.  Why do we in the West think this has to be imposed on the rest of the world?  Why do we accept stranger men walking around with girls in their underwear outlines? It’s insane if you stop to compare our culture to the rest of Western history or even current accepted norms in the East.  When we all see the weight of sins of immodesty at the Final Judgment, we will see through the lens not only of Divine Judgment, but even through humanity of every time and culture…not just contemporary soccer-parents of a fervently-lukewarm era—perhaps a relatively unimportant time in Western-Catholic history.