In this short video, Stephen Colbert (comedian-turned-theologian) says “Faith ultimately can’t be argued; faith has to be felt.”  Let’s cut through his poor philosophy and consider reality:

1) Feelings are often no different from biochemical pleasures.  God uses feelings in all stages of prayer, but it is not central to the substance of the soul where the Blessed Trinity resides.  If faith must be “felt” as Colbert said, then where does that leave Mother Teresa who couldn’t feel anything for 60 years of prayer?  But false-positives abound, too:  If I drink an enormous Chemex hipster coffee and feel like a saint who could take on the world, did I just “feel” an increase in my faith?  Of course not.  That is because there is some correlation between good spiritual “feelings” and the release of neurotransmitters like dopamine and norephinephrine. That’s why we called coffee in seminary “liquid consolation.”  But we were joking.  Sadly, Colbert was not.  Back to neurotransmitters:  These reuptake mechanisms are also found in more intense pleasures (like cocaine.) So, “feeling your faith” doesn’t increase faith anymore than cocaine.  Even atheistic scientists will agree with me here:  Spiritual “feelings” are frequently nothing more than the release of biochemicals in the brain. I make no moral judgment against either feelings or pleasure here.  God created both and can affect both in prayer, but it’s not the central tenet of faith.

2) One’s opinion of truth is only as good as the evidence that one has to support it. Few doubt this truth in science, but if religion refers to truth, then this is true in religion also.  Regarding feelings and logic together, Colbert does admit that “they do not defy each other but complement each other. ”  He then says, “Logic itself will not lead me to God.”  This is partly true,1 but there’s a glaring omission in the above video:  The Resurrection of Jesus Christ is a historical binary event (true or not true) upon which hinges our entire creed.  “And if Christ has not been raised, your faith is futile and you are still in your sins.”—1 Cor 15:17.  Colbert inadvertently disparages the starting point of Christianity, namely, that the Resurrection and Divinity of Jesus Christ can be given some real evidence. Or rather, we can not prove that Jesus Christ rose from the dead, but we can disprove the contrary with pretty air-tight historical arguments found in books like Kreeft/Tacelli’s Handbook of Catholic Apologetics.

For all the Social Justice Catholics that promote Colbert, we have to admit it’s ironic that Colbert puts the emphasis on feelings—something the poor don’t have the luxury of always enjoying in their daily walk with Christ.  The Christians being crucified by ISIS may not “feel” their faith, but they have a hope in the crucified and resurrected Jesus Christ based in a historical event.  But I guess feelings are good for a multi-millionaire hanging with the Jesuits of Manhattan.

Yes, for Colbert, “faith ultimately can’t be argued; faith has to be felt.”  In this philosophy, random biochemicals in the brain must take precedent over truth. Besides this conclusion being false for both Jesus on the cross (not good feelings but lots of truth) and St. Thomas Aquinas (who says very little of feelings and lots of truth) there’s actually another odd problem with Colbert Catholicism:  It’s the most boring version of Catholicism we have heard since the 1970s.  Almost all of my Gen-X friends raised by progressive-Catholic baby-boomers have left the Catholic Church.  Inclusive-Catholicism turned out to be exclusive-Catholicism, precisely because it was founded on the feelings of a few ex-hippies instead of the Truth.

Most normal people long for one of two ways of life:

Feelings=Pleasure=Religion of hedonism (max out on pleasure.)

Logic=Truth=Religion of Catholicism (max out on truth and love, but it hurts just a little on the way to heaven.)

At the end of the day, here are our best two options: An-unbridled-pleasure-fiend or a total saint.  I don’t believe in a middle-ground—practical or theological—where you get neither.

This isn’t to say that Catholicism is cold-cut syllogisms without any affections of love of Jesus Christ.  Nor does it mean that all pleasure is bad.   God made feelings and God made pleasure.  But at the end of the day, we have to decide if we’re going to live for feelings or the truth.  2

So, what is faith, then?  “Faith is the substance of things to be hoped for, the evidence of things that appear not.”—Heb 11:1.  Evidence means just that—evidence, as I wrote above in regards to the historical evidence for the resurrection of Christ.  But if Colbert wants this at a more personal level, the word “faith” in Greek (πιστις) is actually also the same as trust.  It means a trust-of-life, not just a single statement of salvation.  It means daily decisions, not just a single act of consent of the intellect (Protestantism) or emotions (Colberism.)  You see, if faith is trust, then this includes loving and hard decisions in the body all day long, including chastity, for “we must all appear before the judgment seat of Christ, so that each one may receive what is due for what he has done in the body, whether good or evil.”—2 Cor 5:10.

Jesus rarely said “Believe in me.”  He frequently said “Follow me.”

Mother Teresa’s faith went deeper than both emotions and logic.  For 60 years she did not “feel her faith.”  Yet she got up at 3am or 4am to pray for two hours before her Eucharistic Lord and served Jesus in the poorest of the poor in the streets of Kolkata for decade after decade.  Mother Teresa was living trust in the body when the feelings weren’t there.  These were decisions she lived out in her body, and yet her emotions were so dark that she had to make constant acts of faith in God via her will—acts that were above and beyond the dark night of the soul that lasted a grueling 60 years.  This is a tough marriage to a Divine Spouse!  She often complained lovingly of her silent lover…

In fact, at the risk of scandalizing my readers, I’ll point out what she once wrote to a friend:  “Pray for me, pray that I may have the courage to keep on smiling at Jesus—I understand a little the tortures of hell—without God.”  I used the word “scandalized” because you should be surprised that Mother Teresa felt herself (not made herself, but felt herself) to be “without God.”  And yet, she made constant acts of faith—essentially hope against hope—of having no feelings of God, yet seeking Him anyway.

Since her death, many people who felt on the verge of suicide have since found strength in the ways of Mother Teresa.  People who had struggled their whole life with very personal sins and thought God abandoned them found hope in Mother Teresa.  Why?  Because, they reason,  if God loved Mother Teresa even when she couldn’t feel Him, then His love must still be there.  If God could love Mother Teresa as she was, maybe He loves me in my serious sin.  They are right.  And it is still His kindness that leads us to repentance.

In fact, in that same letter, Mother Teresa explained her suffering for the life of the world:  “I have no words to express what I want to say, and yet last First Friday—knowingly and willingly I offered to the Sacred Heart—to pass even eternity in this terrible suffering, if this would give Him now a little more pleasure—or the love of a single soul.” 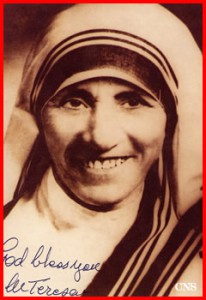