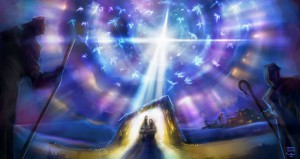 “One will be sent in the flesh,” thundered the most beautiful Trinity to the angels and all the courts of heaven eons ago. In perfect harmony they rejoiced. But later, they wondered if anyone but a lowly archangel like Raphael (still more glorious than a burning star) could dare condescend again to take flesh as Raphael did for Tobit. Their best guess for the new assignment was Gabriel. God said “Gabriel will go…but in spirit as preparation. One much higher than he will become flesh.” “But how?” the angels wondered, “A cherubim’s eyes would melt the trees and mountains. No human warrior’s body could even instantaneously hold the power of a seraphim. Who will go in the flesh?” And they intuited through each other like laser beams, seared and alit by the thought of leaving the splendor of heaven for the dirt and sorrow of earth with man. And then the answer came from God:

“I will become man.”

After ages of silence, awe, wonder, war and adoration, a high angel said “The Lord’s voice flashes flames of fire. What warrior shall you absorb for your powerful and wise task?” And God replied “I shall assume the body and nature of a poor baby, and I will eventually be nailed to a tree to die quietly, without friends. This will be for mercy, for all.” All fell down in confused adoration that the essence of God would be humility.