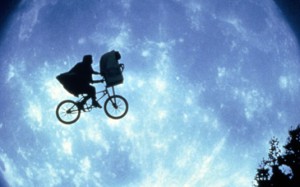 Like most kids growing up in Denver in the 1980s, the only thing that could slow me down was sickness or a movie directed by Steven Spielberg. My brother and sister and I were always spellbound.   We didn’t like to re-watch most movies, but his we could watch over and over and over.

Spielberg, clearly Jewish by his name, had a better mystical understanding of the Old and New Testament than many Catholics.

For example, I don’t remember a single homily growing up on worthy reception of Holy Communion as the Apostle Paul warns the lukewarm Corinthians:

Whoever, therefore, eats the bread or drinks the cup of the Lord in an unworthy manner will be guilty concerning the body and blood of the Lord. Let a person examine himself, then, and so eat of the bread and drink of the cup. For anyone who eats and drinks without discerning the body eats and drinks judgment on himself. That is why many of you are weak and ill, and some have died.—1 Cor 11:27-30

It seems that Spielberg got pretty close in Indiana Jones and the Last Crusade when the unworthy Donovan approaches Christ’s original chalice:

Maybe that scene is partly why I only offer the Latin Mass now.  Just kidding.

Kind of.  Not really.

In any case, my friend Ben once told me his theory that Spielberg’s ET was a projection of his subliminal desire for Jesus Christ, a resurrected savior with a glowing Sacred Heart. It seemed like a stretch.

After re-watching ET in my adulthood, I realized that Ben may be right.  Thus I’m going to add to his reasons.

Here’s some ways that the fictional alien ET is like the historical Jesus Christ:

1) He brings new life (The flowers come back to life.)
2) He heals (Elliot’s finger after the saw accident)
3) He rides his bike in the air (kind of like walking on water…okay, this one is stretch.)
4) He bears the people’s pain.
5) He feels our feelings (Elliot’s, especially.)
6) He dies at the Mercy hour (“1536” is when they call ET’s death)
7) He dies for Elliot—literally takes his death on himself, or rather in himself.
8) He resurrects from the dead  (at the call of love, when Elliot says “I love you.”  Love is stronger than death.)
10) He wears white at his resurrection.
11) He says “I’ll be right here” as he touches Elliot’s head with his lit finger, almost as to say before leaving, “I’ll be with you always.”
12) He ascends whence he came.

13) His heart glows like the Sacred Heart of Jesus: 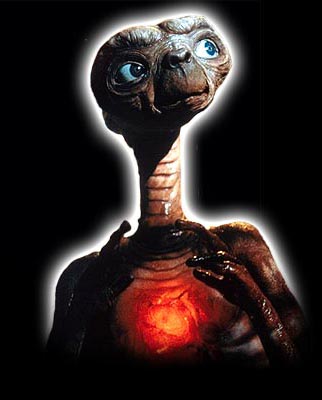 Who is Steven Spielberg really longing for?