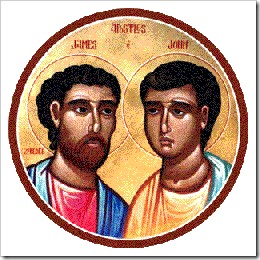 By a strange turn of events, I have to spend a day in Istanbul while trying to get home from Spain—even though it’s the opposite direction.

The reason this is especially strange is because these two countries were evangelized by the brothers James and John, sons of a Galilean fisherman named Zebedee.  These two men became first century Apostles of Jesus Christ.  Jesus nicknamed them “Sons of Thunder” because of their attitude towards life.  After His resurrection, Our Lord sent St. James to Spain and St. John to Turkey (with His own Blessed Mother.)  I flew from James’ land to John’s land today, and I’m tryıng to navigate a keyboard set up for the Turkish language at 9pm here in the city center of Istanbul.

What happened?  This great loss is usually blamed on Islam.  It is true that the violent conquest of Turkey happened as early as the very century of Mohammed (7th century.)  It was completed in the 15th century.

But Jesus is always faithful to His Church, especially in persecution, so something else happened.

We have to remember that Jesus speaks directly to the Turkish Churches in the book of the Apocalypse and warns:

I know your works, your toil and your patient endurance, and how you cannot bear with those who are evil, but have tested those who call themselves apostles and are not, and found them to be false. I know you are enduring patiently and bearing up for My name’s sake, and you have not grown weary. But I have this against you, that you have abandoned the love you had at first. Remember therefore from where you have fallen; repent, and do the works you did at first. If not, I will come to you and remove your lampstand from its place, unless you repent.—Rev 2:2-5

This was evidently not an empty threat from Our Lord.  The light in Turkey would indeed extinguish.  It was lukewarmness that sunk the Church here in Constantinople/Istanbul, just like it is 20th century lukewarmness that has nearly sunk the living Faith within the country I just walked across, Spain.

How do I know it was lukewarmness and not Islam that has extinguished the fire in the two countries of the Sons of Thunder?  Because Spain is the only country in the history of the world that was conquered by Muslims and reconquered by Christians to again become a Christian country.  This reconquest was done by a woman, Isabel “la Católica,” an outrageously beautiful name, considering she came from a line of 800 years of Catholic kings attempting that very reconquest of Spain that Isabel (a married queen who knit her children’s own clothes and rode horseback alone at night in the rain to quell uprisings) finished once and for all in the 15th century.  She did it on horseback and in battle, but mostly on her knees.

The next three centuries then witnessed Spain evangelize most of the Western hemisphere.  In fact, this deed was also due to Queen Isabel “the Catholic” who took a risk on Christopher Columbus.  (She originally told him “No” and then sent her courier to inform him that she changed her mind when he was several kilometers outside the city.)  Whether you like Christopher Columbus or not, the point is that Islam didn’t ultimately stop the greatest Catholic nation in history from producing St. Francis Xaviers.  In fact, in some strange way within the permissive will of God, Islam helped the evangelization of the World.

Now, Spain has fallen to secularism harder than she ever fell to Islam.  This may sound like an exagerration, but I promise the following is true:  Almost every day on the Camino, a Spanish man or woman would see my Roman Collar and preach New-Age relativism to me (in Spanish) before I could ever explain the Gospel, or even say my name.  What St. James and Queen Isabel won heroically—what Islam could not extinguish but strangely fueled—has been trashed by the heresy and lukewarmness from within the Church, not without, especially in the past 50 years.

I’m not much of a patriot for the country that St. John Paul II called “the culture of death” (the USA) but after travelling the world the past year, I can glorify God for the USA for this reason:  We Americans have a hope for a renewal and restoration of the Faith which is greater than the hope of Spain or Turkey, (at least if grace keeps building on the nature of these countries’ attitude to Christ and His Church.)  Yes, miracles can change anything overnight (like Mexico from the miracle of Our Lady of Guadelupe) but right now, I’m proud to be an American.

But if the Catholic Church in the land of the Blessed Virgin Mary (Turkey) can nearly collapse, we must move beyond our extreme presumption of God Almighty and return in sackcloth and ashes to Him.  Better, we must return to our first love (see the quote from Apocalypse chapter 2 above.)   We need Sons of Thunder to do the works those men did at first.

Why did Jesus call them Sons of Thunder, anyway?  One example is this:  When a Samaritain village rejects Jesus, St. James and St. John have an idea:

His disciples James and John…said, “Lord, do you want us to tell fire to come down from heaven and consume them?” But (Jesus) turned and rebuked them.—Luke 9:54-55

In regard to that passage, we have all heard a thousand stupid homilies that go something like this:  “The Apostles were Old Testament—all based in justice.  But Jesus was about to teach them about love.”

1) Has anyone ever considered how or by Whom the Apostles thought (or knew) that they had the power to call down fire anyway?

2) Jesus chose fighters, not lovers.  He chose fighters to turn them into lovers.  Lovers of “the brethren” as John wrote.  Lovers of “Christ crucified” as Paul wrote.  Christ needed fighters who believed in something, precisely so Christ could turn these fiery-fishermen into lovers of the peace that only Christ can give.  He warned there would be no peace from compromise with the world.

Perhaps a 20th century fear of that zeal is why seminaries the past 50 years got so full of men acting out effeminate sexual-perversions.  Apparently it was worth it for dioceses to keep the sacraments flowing out and the money flowing in towards these charming men at the pulpit.  But the real test of a priest is how many men he has inspired to follow Christ into religious life or a holy seminary.  The Sons of Thunder cared more about spiritual multipication than the numbers of money or popularity raised among those making  sacriligious communions.  Just google St. James and Our Lady at Zaragosa if you think discipleship among priests is a new idea.

Globally, we will see the Triumph of the Immaculate Heart of Mary, as she promised at Fatima.  But how many souls will be lost before then?  I believe that the USA, Africa and Asia will be called upon to bear the torch to rekindle the ancient faith in the world, but you must pray for priests who will be fighters and lovers…those who will fight the battle of love for the peace that only the cross of Jesus Christ can bring.  Peace with God the Father comes only from the sacrifice of Christ—the only One who can reconcile us to a God who is infinitely holy.  Divine Mercy and ancient Tradition.

The Church desperately needs priests who wıll not be simply charming and semi-orthodox, but Sons of Thunder.

Raise such men in your families.