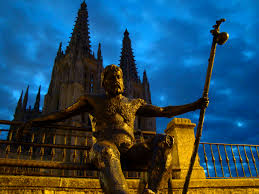 When I think of angels in adoration of the Blessed Trinity, I think of how the angels´ adoration is: cosmic, undulating, unified to an inter-galatic degree of gyrating glory, power, light and effusion.

Then I wonder: How could I praise God like that? Hands up? Sing louder? Better music? Everything except the Mass actually comes up short in reality, and even then the full glories of the Mass are not known except to a few saints, this side of the veil.

Why exactly are we left in dust and ashes on earth while the angels know quite easily how to orbit God in weightless joy, combined with all the weight of glory?

The answer is pilgrimage. This is all training to praise God like that.  St. Therese wrote, “The world’s thy ship, and not thy home.”

If you remember from the last pilgrimage entry, we have to face the giants of the Canaanite tribes in order to get into the Promised Land. These giants are real-live demons threatening the New Covenant. As formidable opponents, we find a third of the angels fell before we were even conceived.  Before that, their level of glory was pre-determined by God. As their slots are now open, it is the glory of men and women to fill into higher and higher places of glory in heaven. But this won´t be based on who shot the best laser-beams at the DC Talk show.

Our level of glory in heaven (1 Cor 15:40-43) will be determined by our level of suffering (Rom 8:17) lived with love (1 Cor 13.) That is, sacrifical love will determine how high of a slot of glory we take in heaven that literally used to be held by a fallen angel. We, however, will have our bodies within this new heavens and new earth.

Why did God ever let us get to this valley of tears? Well, we banished ourselves from the Garden by rebellion, but the angel guarding paradise with the flaming sword became not only a justice, but a mercy of God. The return plan would take 4,000 years, but God is faithful. Now we are in that time which “many prophets and righteous people longed to see…but they didn’t see.” (Mt 13:17) Yes, we were sent out on an adventure by Our Father—one which can now be lost with the most serious of consequences—but He gave us His only Son as the companion for every step of the journey. The journey where? Home.  That’s where praise will be uninterrupted if we pass this gauntlet of a training phase.

This great departure and return has been called by St. Thomas Aquinas the Exitus and Reditus, the exit and the return to God.  It’s a giant circle that is dangerous and fun.   It is called by St. Maximilian Kolbe “Separation” and then “Union.” Either way, both show that we were set out on an adventure, a journey-quest, sent by God Our Father, with Jesus our brother to walk with us. The goal? Make it back home alive in a land of dangerous giants. Why must we leave home? Because our first dad, Adam, chose to leave home and chose death. Home was life. The pilgrimage was death.  But the pilgrimage was transformed into life by the Second Person of the Trinity becoming a human.

By the incarnation of the Divine Word, the second person of the Blessed Trinity, Jesus turned the pilgrimage into the beginning of life (and fun) if we walk it with Him. We are the prodigal, pilgrim sons and daughters. Our family (human beings) had to leave the garden and now we learn how to fight for love.

The phrase “Our kids are on loan from God” may be over-used among certain families, but I remember that the first time I heard it.  I was blessed because the family who said it really, really meant it.  I was stunned at the sincerity of the parents who told me that.  It was during my first year of priesthood. After Mass, I asked this family about their kids, and the parents said:  “We know that they’re just on loan from God.”  Perhaps that philosophy is the greatest medicine against the “cult of the child” that can fester a skewed adoration of one lone child.  It’s also great medicine against the opposite “We had a child to fulfill our emotional need” syndrome.  Both parenting techniques will lead the poor kid to a psychologist’s chair by the age of 14.

But if the kids are on loan from God, then the one goal is:  heaven… not Harvard, not Yale, not Wall Street.  Why would God trust anyone with the precious souls He has created?  This is the mystery of responsibility, how our actions have eternal outcomes.  But also we have to recognize the great mystery of the exitus and reditus of pilgrimage here.  The child goes forth (exitus) from her Origin (God.)  Then, the parents’ job is one:  Return (reditus) the child to her true Origin.  This is why God is Father as no man is father.   This giant circle is the pilgrimage of earth, and we have to get as many home safely as possible.

St. Augustine wrote “God promised eternal salvation, everlasting happiness with the angels, an immortal inheritance, endless glory, the joyful vision of His face, His holy dwelling in heaven, and after resurrection from the dead: no further fear of dying…He wanted, through His Son, to show us and give us the Way that He would lead us to the goal He has promised…It was not enough for God to make His Son our guide to the way; He made Him the Way itself, that you might travel with him as leader, and by Him as the Way.”

Thus, the glory on this earth will not feel like an angels´s spreading of the six-wings. Rather, it will feel like the arms stretched on a cross.