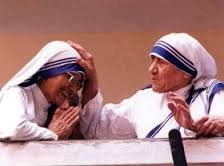 Sr. Nirmala Joshi MC is found to the left in the picture above.  It’s taken on 14 March 1997, the day that Mother Teresa and a closed-door vote of about 100 sisters made Sr. Nirmala the Superior General of the 5,000 Missionaries of Charity world-wide.   CNN took notice in this article because a Hindu-convert to Catholicism took over the most rapidly-expanding religious order of the 20th century. (Up to that point, her CV was already impressive, as Mother Teresa’s co-founder of the MCs and the foundress of the Contemplative Branch of the Missionaries of Charity in 1976.)

Now Sr. Nirmala is 81 years old. She had a heart attack about a month ago. Because she is a veritable celebrity in India, they had to make her hospital stay a very short one.

A couple of days ago, I was surprised when a younger  sister asked me out to take a 15 minute bus ride in order to offer Mass in the 81 year old foundress’ bedroom. There would be just a few nuns assisting at Mass.  I went and offered Mass there.

After Mass, Sr. Nirmala and I got to talk.  I would say that it was one of the only times in my life that I felt the consolation of being in the presence of a living saint. I asked her to tell me why she converted from Hinduism to Catholicism, and I’m going to recount her story as best as I can, even though I wasn’t taking notes as I knelt next to her wheelchair:

Of Nepalese blood, Nirmala Joshi was raised in India in a Hindu family. At age 7, she was leaving the temple of Shiva, and she looked across the street to a Catholic Church rectory statue of the Sacred Heart of Jesus. She explained that at that moment, the statue shined a overpowering light that terrified her. She left the area of the Church and temple, but she went back to peek over the fence every day on her way home from elementary school. She was clear with me that it was more from fear than devotion!

Eventually as a child, she picked up a New Testament, and she opened right to the one verse where Jesus talks about His own heart: “Learn from me, for I am meek and humble of heart.” (Matthew 11, which was the Gospel for the day that I had just read in the private Mass!) Expecting a third miracle of her telling me about the Sacred Heart, Sr. Nirmala surprised me. She said she closed the Bible and said He must be so arrogant talking about Himself all the time! (The sisters giggled because they knew what was coming…I was a little taken aback, but then I realized later that, for Eastern Religions, they wouldn’t understand why Jesus would talk about Himself. For example, Buddha said “Be ye lights unto yourselves” but Jesus said “I am the light of the world.”  This only makes sense if Jesus is God, the only true God.)

But as she became a teenager, Nirmala (which means pure in Sanksrit) wasn’t too interested in Christianity.  Perhaps for the quality of education, she went away to a Catholic High school in a different city. Then, one day in her dorm room, at the Angelus Bell, her roommate (a Hindu) dropped to her knees to apparently pray the Angelus (an ancient prayer with three Hail Marys.)  Sr. Nirmala eyed her curiously, but then Sr. Nirmala told me something I’ll hopefully never forget:

“Jesus entered my heart at that moment, and made it clear to me it was He. And He hasn’t left since.”

She smiled when she told me this, and she meant it.  She continued her story to me, even though I thought she was going to wrap up our session at that point…

After her conversion, she soon wanted to start a congregation to her help her country’s people (Nepal) a land where she had never been. She wrote her Jesuit spiritual director who put her in contact with Mother Teresa (early 1950s, I think.) Mother told her she would only train her as a Missionary of Charity, and she should only come if she were 100% able to put her whole heart into it.

Nirmala went to Kolkata and was one of the first members to join.  In fact, I believed it was the Jesuit spiritual director of Mother Teresa who baptized her upon entrance!  Still, she was worried about her dream to go to Nepal being sunk in the MCs.  So, Sr. Nirmala asked mother about this. Mother Teresa told her: “Kolkata is the same as Nepal. Everywhere you need to bring people to the heart of God.” So, Nirmala slayed her dreams of Nepal.

However, many years later she would not only help found dozens of homes around the globe, but Sr. Nirmala would be responsible for founding three homes of Missionaries of Charity in Nepal! Such is a true Abraham/Isaac story of vocation and God’s faithfulness.

I left Sr. Nirmala with a prayer request but then the sisters asked me back to offer private Mass with her again this weekend, so I will return on both Saturday and Sunday…to offer the Holy Sacrifice in the presence of Mother Teresa’s best friend.