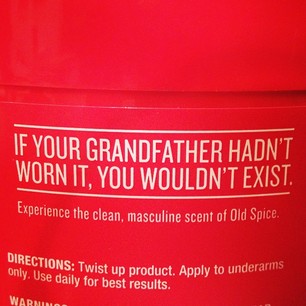 The Americans I live with got me Old Spice, for showers here are rendered useless within five minutes of walking through the streets of Kolkata.  Old Spice is a time-tested product that has been eclipsed by newer sprays that promise impassioned encounters with strangers.  So, I’m happy to go with the Old Spice.  However, with the above advertising, I suspect that Old Spice decided that instead of simply replacing the geriatric connotations with sex, they could just combine the two.

This advertising stunt of being self-deprecating is a bit like how Radio Shack had a Super Bowl commercial with the Muppets so as to display a good self-deprecating admission of antiquated products.  This way they could have a good [forced] laugh with their customers and move on in their sales (or sink into bankruptcy, like Radio Shack did.) So also, Old Spice declares:

If your grandfather hadn’t worn it, you wouldn’t exist.

While that is a bit obnoxious and surely not a visual that any customer wants, there is a profound truth in it:  Attraction was for procreation in a bygone era when no one questioned that connection between babies and bonding, even if pheromonically amplified by grandpappy’s Old Spice.  (N.B. My blog’s spell-check was very disapproving that I just turned the noun “pheromone” into an adverb. )

Old Spice’s advertising recognizes a pre-contraceptive era when male-female attraction  produced children.   I don’t have such a rose-colored view of the past as to think that our grandparents didn’t sin.  But back then, even if your parent was conceived before WWII and your grandparents got married after WWII, this union was still ordered towards…existence, life…in a time of so much world-wide death and world wars.

Existence:  This tremendous reality that God’s creation should leave us in awe at His super-abundant, super-diverse creating power.  God wills your existence as He declares:  IT IS GOOD THAT YOU EXIST.

God bless Old Spice for even talking (albeit in an slightly-gross way) about family, pro-creation and that most-important word of Thomistic Metaphysics:  existence.