That Time When We Tried to Start a Religious Order

Jesus said to him, “If you would be perfect, go, sell what you possess and give to the poor, and you will have treasure in heaven; and come, follow Me.” When the young man heard this he went away sorrowful, for he had great possessions.—Mt 19:21.

In my VLX series (Video Lectio Divina, an online Bible Study) we recently covered the above line from St. Matthew chapter 19.  In it, the rich young man is proud that he has kept the commandments of God.  But Jesus then challenges him to go further:  To sell everything he possesses, give it to the poor, and then follow Jesus.  Any of my listeners might be right to say, “Wait a minute.  Why hasn’t Father Nix taken this literally and tried to sell everything if he is teaching all this online?”

The fact is:  I did try it, just a couple years after being ordained.

Here’s what happened:  Being in campus ministry on two of Colorado’s largest University-based parishes the first few years of being a priest, I met many zealous young men and young women.  At the same time, I was growing in my love of adoration, evangelization and the anti-abortion movement as well as the anti-trafficking movement.   After much prayer, I asked a few zealous University men to discern with me starting a homeless order of men with me who would live nights before the Blessed Sacrament and days on the streets, evangelizing those in danger of those falling into abortion or trafficking.  We would beg every meal.  We would start mendicant like the early Franciscans or Jesuits.  Also, since I spoke French, Spanish and Portuguese, I had big plans to bring this missionary-order across the world.  We even had a few young women who wanted to join us to form the female-contemplative branch of this congregation.

However, due to my hypothyroidism and being frequently cold, I knew we had to start in a temperate environment if we were going to be homeless.  So, a few young men and I flew to Florida to petition the Archbishop of Miami.  We met with him in his office, asking him to begin a Eucharistic-based homeless order under him on the streets of Miami.  He was a little surprised, so he told us we had to try it out somewhere as homeless celibates first.)  So, we did.  We flew to Los Angeles for an experiment in another temperate environment.  There, we did what we had originally proposed:  We stayed in adoration chapels at night.  We walked the streets of Los Angeles in the day.  Because we were fasting, I had never seen so much success in our abortion-center counseling.  We shared the Gospel of Jesus Christ with young people and old people on the streets of Hollywood.  We only begged one meal a day, but Los Angeles truly opened her hearts and kitchens to us when we told what we were doing.  We finished our street-experiment thrilled, but in need of a short retreat which we ended at the Norbertines in southern California.

I was excited to hear from the Archbishop of Miami after we reported our experiment in a radical religious life.  However, he wrote me and said that basically my home Archbishop dissuaded him from taking me.  I was pretty devastated.  Upon reflecting on the history of my favorite order, the Jesuits, I decided to personally write a new Jesuit addition to the Vatican.  I came to the conclusion that if St. Ignatius could start in Rome with a group of homeless, zealous mendicants, so also I could sell all my belongings and move with a few men to live as a homeless priest in Rome for this venture. I wrote the letter and Spanish, and I heard back in Spanish.  Keep in mind that in 2013, Archbishop Viganò was Apostolic Nuncio to the United States, and his below letter to me was written before his 2018 whistle-blowing events: 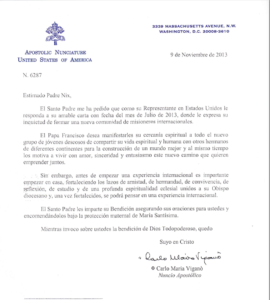 My translation of the above letter is:

The Holy Father has asked me as his Representative in the United States to respond to your kind letter dated July 2013, in which you express your desire to form a new community of international missionaries.

Pope Francis desires to show you all his spiritual closeness to that whole group of young people desiring to share their spiritual and human lives with other brothers of different continents for the construction of a better world, and at the same time, motiving them to live with love, sincerity and enthusiasm in this new way that you wish to begin together.

The Holy Father imparts his blessing, assuring his prayers for you all, and entrusting you under the maternal protection of Mary Most Holy.

While invoking over you the blessing of Almighty God, I remain, yours in Christ,

Notice that I’m just relaying the exact words the words of the letter, and it doesn’t reflect what I discovered around 2016 as I looked back in study at the Vatican-happenings of 2012-2013 in regards to the papacy.  See the very horizontal language of “construction of a better world” and “brotherhood”, when my original letter was “vertical” in speaking of “the salvation of souls.”  Therefore, I’m quite sure it was not AB. Viganò who infused that horizontal language of “construction of a better world” into our potential congregation that was seeking God’s glory.  Yes, I believe Viganò too would have used “vertical” language like salvation of souls if this letter had not been directly dictated to him.

In any case, I wanted to live life as a homeless priest, but it was ultimately the hierarchy who stopped me:  My home-bishop told me no.  A Florida bishop told me no.  The Vatican even told me no.  I obeyed and returned to parish ministry in Colorado.  But here’s the funny thing:  When all this went down in 2013, I had no smart phone, no Facebook, no Twitter, no blog, no podcast.  It was all my superiors who told me “No” to being a mendicant priest who ironically created this online-priest of Church-reform. I’m probably teaching more people now with my current lifestyle than if I had been permitted to start that homeless religious order. Also, ten years ago, I was mostly a Novus Ordo priest.  But now in 2022, God has blessed me with exclusively using the old-rite of sacraments for years now, proving that He uses our would-be foilers to bring about His plans of Providence in our lives, even if the path we end up on was God’s compensatory plan for our lives.

I write this blog mainly to show my readers that I at least tried to take that Gospel-line seriously about selling everything to be poor.  Nowadays, I obviously need a computer and other items for my teaching ministry (which you all fund, and for that I am thankful) but we all have to remember that we are all reliant on God and each other for every single vocation within the Catholic Church.  We’re all beggars before God.  So, I continue that begging in some way here, even though my life didn’t turn out as I originally hoped:  in adoration at night, and full-time on the streets in the day.  Perhaps I wasn’t strong enough to cut it, because it was a tough life we proposed.  1

Featured image at top:  Me as a young priest in Africa, hoping to be a missionary.