The Overton Window of Evangelization

The Overton Window is described by Wikipedia as “the range of policies politically acceptable to the mainstream population at a given time.  It is also known as the window of discourse. The term is named after American policy analyst Joseph P. Overton, who stated that an idea’s political viability depends mainly on whether it falls within this range, rather than on politicians’ individual preferences.” 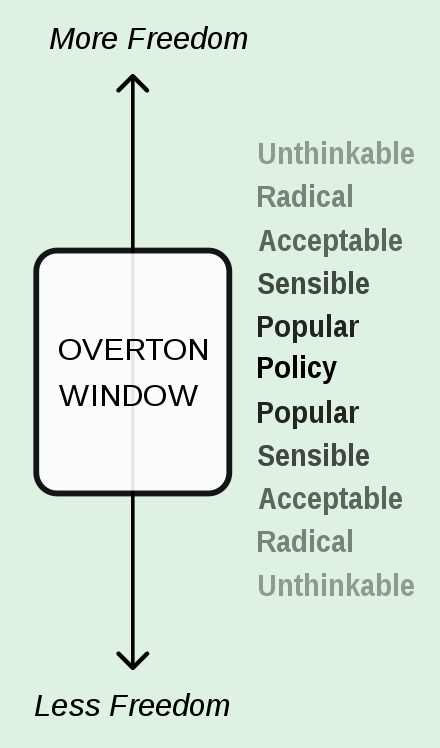 Notice that the enemies of Christ have changed their strategy the past two years.  What was seen as unthinkable just two years ago is now promoted by the left as not only acceptable but necessary.  For example, “Critical Race Theory” taught in schools was unthinkable two years ago.  Now it is necessary to reveal the racist roots of our country (while conveniently covering over the fact that almost all slave owners were Democrats from 1860 onwards.)

St. Paul, while preaching Christ crucified, seems to have sometimes considered the “Overton Window” (obviously without knowing what it was) in going slowly in his catechesis with people:  But I, brothers, could not address you as spiritual people, but as people of the flesh, as infants in Christ. I fed you with milk, not solid food, for you were not ready for it. And even now you are not yet ready, for you are still of the flesh.—1 Cor 3:1-3a

On the other hand, the Apostle Paul probably recognized that if the effect of original sin is so unthinkable (see above Overton Window for “unthinkable”) that most people could not image how bad life on earth since the fall is (St. Ignatius of Loyola describes all life after the fall as “They strike, they kill, they go down to hell”) then only something as “unthinkable” as the cross could be the solution to a wound so “unthinkable” as the separation from God effected in the garden in Genesis 3.  St. Paul shows how hard it is to accept that God (as a man) might die on a cross as this solution seems “unthinkable” to both Jews and Gentiles:

But we preach Christ crucified, a stumbling block to Jews and folly to Gentiles, but to those who are called, both Jews and Greeks, Christ the power of God and the wisdom of God. For the foolishness of God is wiser than men, and the weakness of God is stronger than men.—1 Cor 1:23-25

Thus, evangelization can (and should) be catered to what is “acceptable” before giving the “unthinkable” as St. Paul gave milk before meat.  On the other hand, when a society turns so radically against Christ in “unthinkable” ways, probably the only solution is to preach Christ crucified in the most “unthinkable” ways understanding full-well that this preaching will be deemed totally crazy and untenable, or as St. Paul wrote above, “a stumbling block to Jews and folly to gentiles.”

So when I am on the streets or online, where is that balance I am to strike between giving-only-milk and going full-bore into a Christ-crucified that will be immediately deemed “folly to the Gentiles”?  I do not know…and for that, I ask your prayers for the Holy Spirit’s gift of counsel.  Pray that I may learn to find the Overton Window so as to go slow to win average souls to Christ, or to throw caution to the wind on what is “acceptable” and so be dubbed a total “fool for Christ” who to a nearly unthinkable-thesis of original sin and a nearly-unthinkable solution of a crucified Son of God.