The last time I was in California was last year, but several trips are worth recounting here that shaped my ten years of priesthood.  First, during the summer of 2012 (when I had been a priest for only two years) I led a group of university (and barely post-university) students on a trip called Bike for the Unborn (BFU) where we rode our bikes up the missions of Southern and Central California to raise money for the unborn and their plight in this country.  By “missions,” I mean we visited the ancient Churches founded by Bl. Junipero Serra, the great Spaniard Franciscan known as the “founder of California.”  That summer, we rode our bikes with our belongings on our back and stayed in California State Parks where we cooked by fire at night.  Every mile we tried to raise a few dollars for crisis pregnancy centers or a pro-life organization, riding through the ghetto of USC to the beaches of Malibu, offering Mass at the missions by day. 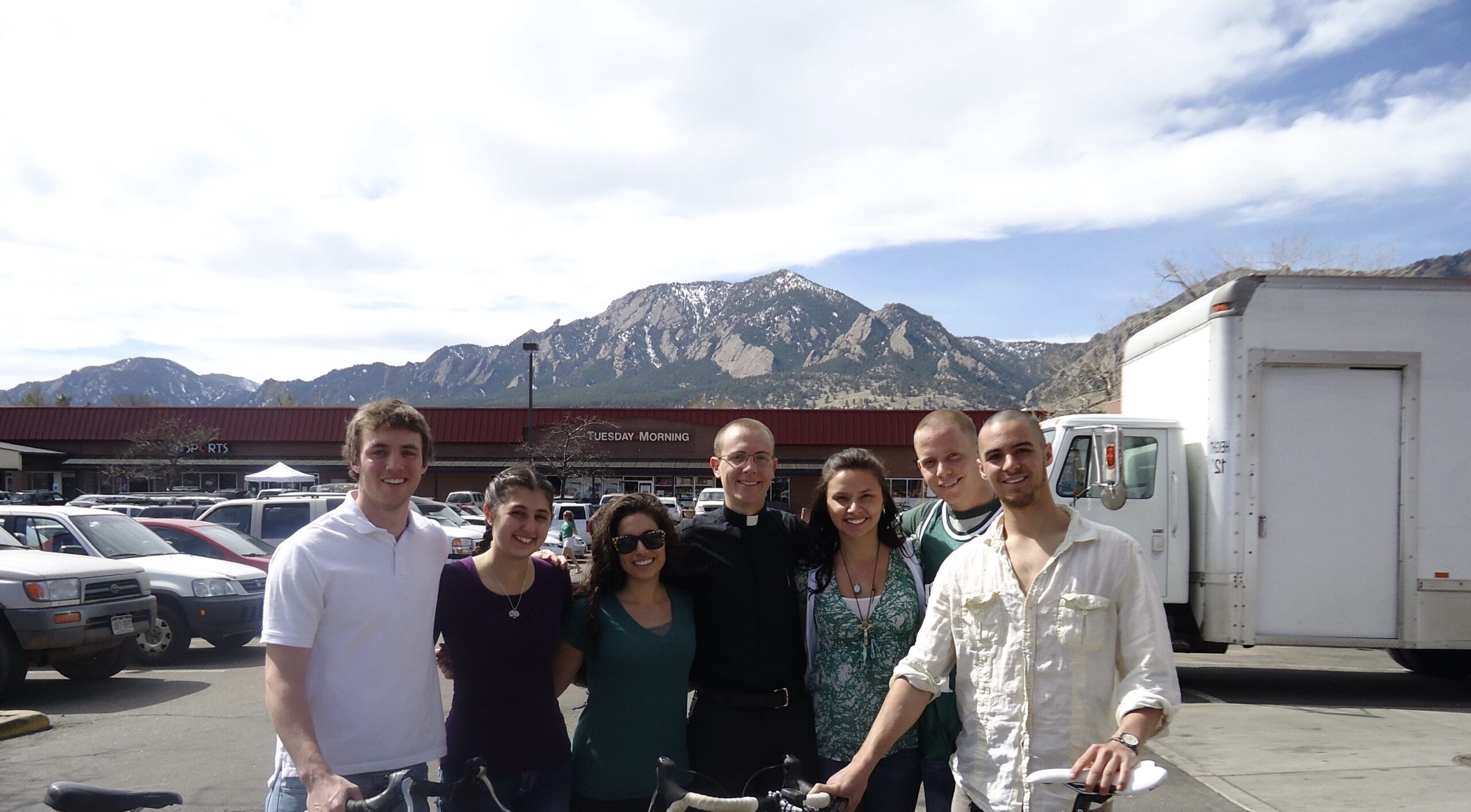 “Bike for the Unborn” prepping in Boulder, CO for our travel across the California missions of Bl. Junipero Serra.

Out of this trip was born not only a love for the unborn, but several of us found a new passion:  The end of child sex-slavery… which fills this country in every city and even many towns.  Two of the women on this trip who would run with this idea for the rest of their lives would be Grace Williams (see featured image at the very very top with another priest and myself) and Lyss de la Torre (see picture above, in the middle with sunglasses.)  These two young women would grow in their friendship with each other and in their zeal to end child-sex slavery in this country.

Several years after the BFU trip, Grace Williams founded (CIH) a charity in to Souther California to help women who had been forced into prostitution.  (I got to lead a Bible Study for them last year while visiting California.)   But its ultimate goal would be a home not for women, but for young girls.  This would be a place of safety and recovery (and even optional sacraments) for young girls who had been sex-slaved trafficked in the USA.  This would take years to open, as it would face much legal opposition in the state of California.  The enemy of human nature was not going let a home for post-trafficked girls to learn the Catholic faith open without a fight.  (Remember that just this week, in September of 2020, California governor Newsom singed a California bill to soften penalties for sex offenders against minors.)

But one day before Newsom signed that horrible bill, Grace’s home, the Refuge (a part of CIH)  opened their doors in Southern California to young teenagers who had been trafficked and sold for sex against their will.  Yes, right here in this country.  I was brought to tears when Grace called me and told me the first girl had walked into the Refuge.  I didn’t know if this day would ever come after CIH had to sue the State of California last year to not force contraception and transgender surgeries on her girls.   But the good guys won, and the Refuge opened last week on the 10th of September, 2020.  The first girl (probably only 13 years old after a whole life of being trafficked and violated) moved into the Refuge with only the clothes on her back and two journals.  My tears were a mix of joy and sorrow for her.

To boot, Lyss de la Torre (the one who met Grace on Bike for the Unborn) recently moved to California to take a job working for the healing and restoration of the young girls of the Refuge.

A few years after BFU but a few years before the opening of the Refuge under CIH, I met Joseph Sciambra in San Francisco.  Joseph is a Catholic writer who left 15 years of a very rough homosexual lifestyle around 2000 and became a strong Catholic who attends the Latin Mass.  A few years ago when I was visiting Northern California, I asked to meet him to make a two part YouTube interview series for Sensus Fidelium on the same streets of the Castro where he had crept in and out of apartments as a young man. 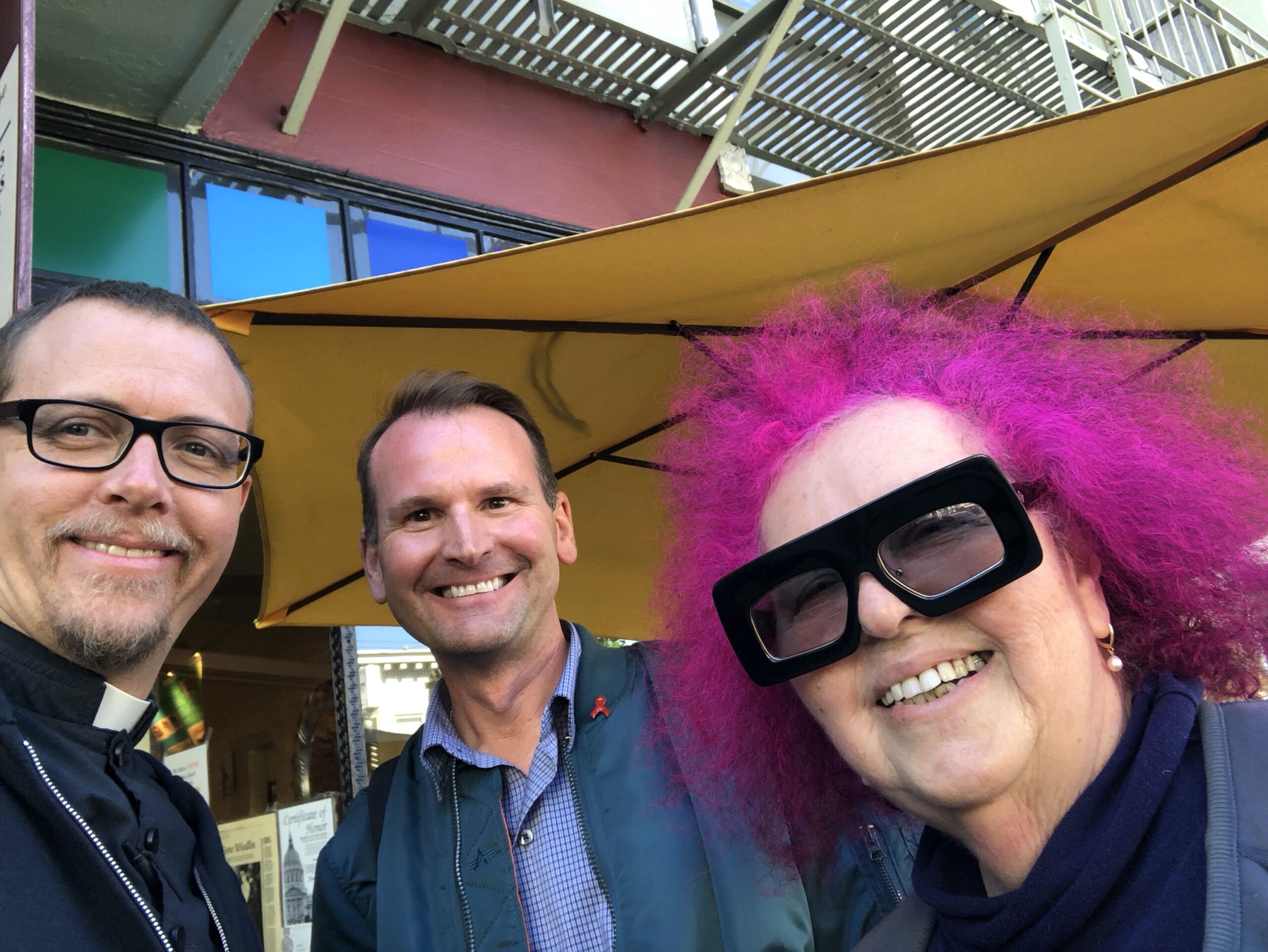 Joseph Sciambra and I meet a new friend in the Castro of San Francisco.

In 2018, Joseph and I made videos for Sensus Fidelium to discuss how he left such a dangerous lifestyle for a life of Christ, why he found a home in the Latin Mass, and finally what fathers can do to make sure their kids stay Catholic and away from such destructive lifestyles.  We made these videos in the Castro with rainbow flags waving behind us, but we met no opposition.  I found that most people (online and in real life) appreciate the journey of Joseph Sciambra, for he gives hope even to even those who walk a lifestyle very far from Christ.

But Joseph has since threatened to leave the Catholic Church because of the priest-child scandals (he himself was a victim at age 16 years old, which surely helped launch him into his 15 years of a destructive lifestyle in San Francisco)  and also because of the cover-ups and accommodation that he finds priests giving to sinful lifestyles.  All of this makes him wonder why he should even stay Catholic if he has to fight not only the devil, but also the hierarchy, in order to stay orthodox.

Thus, I was surprised when he emailed me at the beginning of September 2020 (a few weeks ago) to ask me if he could do just that:  Ask me in an online interview why he should stay Catholic.   Amidst all the abuse, hypocrisy, cover-ups and theological and practical accommodation at the hands of priests, it is a good question:  Why should he stay Catholic?  Just for “the sacraments” when he could get those from the Russian Orthodox?   I agreed to the interview on his YouTube channel, and he produced the following two-hour video: